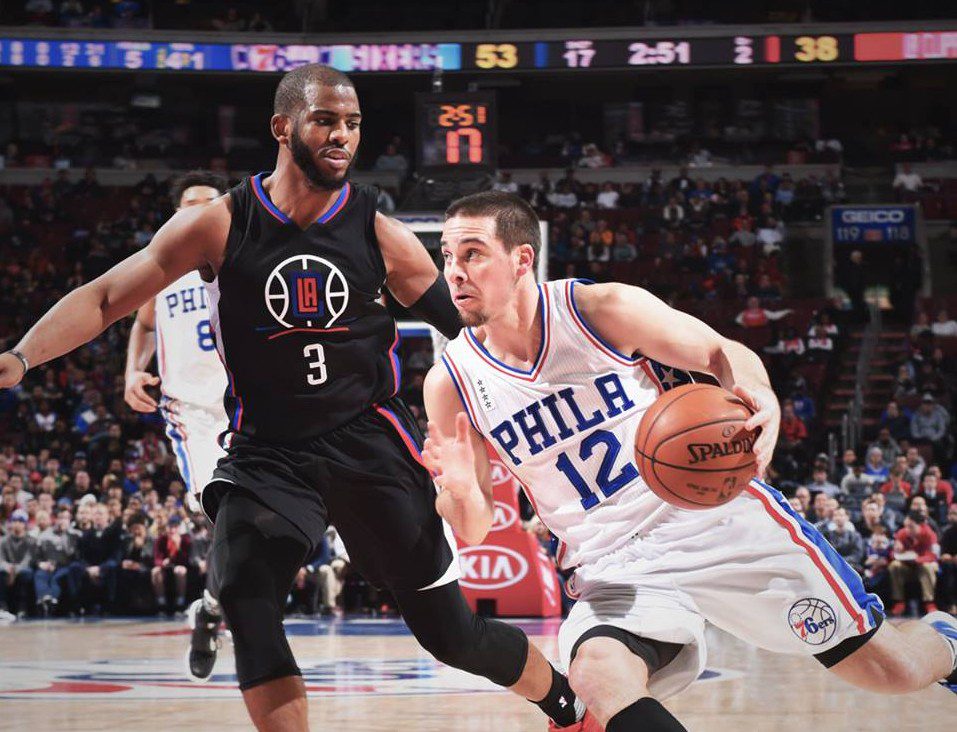 A collection of post-game comments following the Philadelphia 76ers overtime loss to the Los Angeles Clippers:

Brett Brown
On Clippers 19 point comeback
“I think a good team all of a sudden put their hands up.  Their starters came back and they started being an elite Western Conference team.  It caught us off guard and pushed us back on our heels, so we ended up with Ish handling the ball late in the clock on pick and rolls.  Maybe we settled for too many jump shots, but that was part of the reason I wanted to get Jahlil in the game, get him the ball on the elbow and let him go in on DeAndre.  I didn’t feel like we were getting too much else from other places.”

On team’s 29 second half points
“I thought that our offense let us down in the second half. Some of it I credit to a really good defensive team that was also struggling to score.  They had 16 points; we had 14 in that 3rd period.  But I thought that our offense in the second half [was bad].  I think some of it is because we tried to do too much.  Ish had the ball a lot and was trying to save the day.  We needed more movement.  They did a good job of switching out.  They were really hard to get good shots on.”

On both teams defensive performances
“They were switching everything. I thought that by and large our pace in the half court environment was poor.  We became stagnant.  I think that in general, we played really good defense.  And we’re getting better.  It’s a hell of a way to lose.  We will learn from this all over the place.  Situations [like these] are fantastic for our guys to be able to look at and grow from.  Tonight J.J. Redick got one off and I wish Jahlil would have driven on DeAndre [Jordan], but I’ll give DeAndre some credit too.”

On Clippers start in overtime
“They were purposeful in finding Redick.  Chris Paul has an elite basketball mind and he grabbed the game.  When you look at those players, they’ve played together; they know how to execute during crunch time…It’s always about execution on both sides [of the floor].  It’s executing on defense.  It’s executing on offense.”

Ish Smith
On stalled offense down the stretch
“We missed some shots.  I think both teams did a great job defensively; just climbing into each other.  I think they struggled offensively down the stretch too.  They just made [the right] plays when they had to.  We didn’t execute down the stretch and that’s attributed to myself.  As the point guard, you have to somehow, someway get the team in situations where they can be successful. If we did make shots, they were good shots, but they did a good job defensively.”

On Clippers defensive adjustments
“They switched on a lot of our pick and rolls.  In the first half, they weren’t switching.  That’s attributed to Doc [Rivers]; switching it up.  Like I said, I think it was a great game.  It wasn’t the prettiest offensive game, but defensively it was a battle.  We stopped them.  They stopped us.  They just kind of made more plays.  That’s attributed to myself.  I have to somehow, someway get us into good offense.  Some shots that you guys have seen me make down the stretch, I wasn’t able to make tonight.”

On DeAndre Jordan‘s ability to defend pick and rolls
“DeAndre is a heck of a defender. A lot of times when Nerlens and I crossed back, I [usually get] either got an easy jump shot or a lob. The Clippers switched [off of the pick and roll], so now I have Deandre on me and I’m dancing and taking a tough shot over him.  Like I said, both teams did a great job defensively.  I have to get better at somehow, someway executing down the stretch. Obviously, there were shots that I missed that I usually make, but that’s how it goes.  Sometimes the ball doesn’t go in for you.  We gutted it out.  It’s a tough loss that we can learn and get better from because we’re a good team and these are games that we should be winning.”

On Clippers 8-0 run to start overtime
“You could kind of feel the momentum [switch].  The air kind of went out when I missed that layup and it went around the rim and rolled out.  I looked to the sky and said, ‘Well, I guess it’s one of those nights.’  But it happens.  Like I said, I don’t want to take anything away from their team.  That’s a great team.  And I don’t want to take anything away from our team.  We played well.  We gutted it out.  We just didn’t have enough down the stretch.  We had a chance to close it out in regulation.  We didn’t do it.  We’ll go back to the drawing board and figure out how we’re going to get better.”

Jahlil Okafor
On 98-92 loss
“We’ve been losing a lot.  There have been a few games this year that we’ve given away.  Wins have been so few and far between.  It definitely sucks, but we competed really well.  Even when we were up 19, we knew that they would go on a run.  They’re a really good playoff team.  We just tried to stay poised and tried to finish it out, but we came up a little bit short tonight.”

On Clippers 19 point comeback
“They got going.  We were expecting them to go on a run.  They actually went on a run in the 2nd quarter and cut the score to 10 before the half.  They’re a group of veteran guys. They got sharper [as the game progressed], started hitting shots and they definitely picked up their defense as well.”

On missed game winning shot attempt
“I kind of had my mind made up that I was trying to make sure that I got a shot off in time.  I didn’t want to turn the ball over. [Jordan] is such a good defender.  He’s so long.  Those were the two keys things when Coach drew the play up for me were to make sure I got a shot up in time and don’t put the ball out where he can block it and create a turnover.”