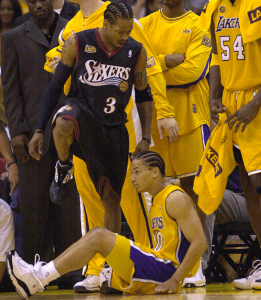 Tyronn Lue had a good NBA career; not great my any means, but respectable nonetheless.  He was an 11 year vet, a two time champion, a once irrelevant bench warmer who used gritty, hardnosed defense to transform himself into a starter.  On Sunday, he’ll be coaching the Eastern Conference All-Stars and, in all likelihood, we’ll probably see him again in June as his Cavaliers push towards their first ever world title.  Yet, despite all of this, the Internet just won’t let the man live in peace.

In the cruelest of ways, Lue could accomplish everything us basketball junkies dreamt about as children, and still, his place in basketball history will always have a picture of Allen Iverson towering over it; literally.  Backtracking fifteen years to Game 1 of the 2001 NBA Finals – a matchup between a dynastic Los Angeles Lakers team featuring Kobe, Shaq and Phil, and the Philadelphia 76ers; a gritty, grind it out, defensive minded bunch led by Larry Brown – the seldom used Tyronn Lue had his named called upon in the most unlikely of circumstances, having been hand selected by Phil Jackson to do what the “Black Mamba” and Matt Barnes’ punching bag, Derek Fisher, couldn’t; and that’s stop Allen Iverson.

From a physical standpoint, he and Iverson had a lot in common. Both were listed at 6’0; both around 165 pounds; both had cornrows.  Iverson, though, was covered in tattoos, while Lue’s body had not a speck of ink in sight.  Iverson was also the league MVP, leading scorer (31.1 ppg) and arguably the most polarizing figure in all of professional basketball.  Lue, a virtual unknown, who at that time, had amassed only 253 regular season points and one career start in three seasons since becoming a Laker in 98’.  So excuse Allen Iverson for not batting an eye when Lue checked into the game because quite frankly, A.I. might not have even known who the hell Tyronn Lue was.

Soon enough, though, he would.

Tyronn was fast, surprisingly fast.  He was strong too; much stronger than his slight frame gave him credit for.  And given that he had only played 23 minutes in the Lakers series sweep over the Spurs, energy and adrenaline were the least of his worries.  So, little Lue laced up his Converse sneakers, tucked in his number 10 jersey, said a prayer, checked into the game, got into a defensive stance and entered lock down mode.  Subsequently, Iverson, who had 38 points when Lue checked into the game, was held scoreless for the remainder of the 3rd quarter and limited to only three points for the entirety of the 4th as the Lakers erased a 15 point deficit to force overtime.  “Those were two Ferraris out there,” said Kobe Bryant.  “Two speedsters.  Ty doesn’t get tired.  He can run all night.”  And that’s exactly what he did.  Up and down the court.  Possession after possession; Lue ran, and ran, and ran.  Even as Iverson caught fire in overtime, he was right there, hand in face, contesting every shot.

But life is unfair, the Internet is cruel and society tends to forget your greatest moments and remember only your worst.  With a minute remaining in overtime and the Sixers clinging on to a 101-99 lead, all of Lue’s heroics were erased in the blink of an eye with one shot and one step.  Iverson, who scored seven of Philadelphia’s 13 overtime points, had Lue isolated in the right corner, inches away from the Lakers bench.  A.I. hit him with a jab step, followed by another, and then proceeded to drive baseline before crossing back and drilling a jump shot over Lue’s outstretched arms; giving him his 47th and 48 points of the night that iced the game for good.  In an attempt to disrespect Lue even further, Iverson glared down at Lue who had fallen to the floor after contesting the shot, and proceeded to step over him as he helplessly sat there in dismay.

Eventually, it would be Lue who got the last laugh.  His Lakers would sweep the next four games to capture their second consecutive championship.  Iverson would never reach the NBA Finals again.  That summer, Lue would say goodbye to the Hollywood lifestyle in exchange for more consistent playing time.  He’d team up with Michael Jordan Washington; with Tracy Mcgrady in Orlando; with Dirk in Dallas.  He’d become a starter in Atlanta; posting career highs in minutes (31.2), points (13.5) and assists (5.4).  When the tank ran empty, he turned to coaching.  Lue was an assistant on the 2010 Boston Celtics team that came within one quarter of defeating his former Lakers in Game 7 of the NBA Finals.  He was also an assistant on the 2015 Cavaliers team that loss to the Warriors in the championship series last season.  Three weeks ago, he was promoted to head coach after David Blatt’s abrupt firing, and in four months could quite possibly be hoisting the same trophy he eluded Iverson of nearly 15 years ago.  Yet, despite all of this, Lue will always be remembered for being on the wrong end of one shot and one step.  Forever frozen in time is the image of Iverson standing over him in a moment of disrespect, dominance and supremacy.  The two will always be conjoined at the hip.  Where there’s Michael, there’s Scottie.  Where there’s Russell, there’s Chamberlain.  Where there’s Magic, there’s Bird.  And where there’s Allen Iverson, there’s Tyronn Lue.

But whether it’s fair or foul, fate or misfortune, Lue is at peace with the image, with the jokes, with his career, and most importantly, with Allen Iverson.  “We became really good friends after that,” Lue said.  “After the Finals, probably four or five years after, we hated each other.  But then after our careers went along, we became pretty close and had a good bond.  He’s a really good friend of mine.”  As for Iverson, the feeling is mutual.  When news broke that Lue had been named the Cavs’ new head coach, the once unconscious scoring assassin took to Twitter to deliver a heartfelt message to his former rival.  “Congrats to Tyron Lue,” he tweeted.  “Well deserved and good luck.  Love you.”

Ultimately, though, for Lue, it was never about the play nor was it about Iverson.  It was about winning a championship, popping bottles of champagne and smoking celebratory cigars. Iverson may have won the game, the accolades and the million dollar endorsements, but Lue has the ring; two of them to be exact.  One for each middle finger to all the people who say he got crossed up.  “I mean, if you look at the image, I played good defense.  He snatched it back, I contested his shot, I’m looking, I fall down and he steps over me.  People act like I got crossed over and I fell and he stepped over me.  So, it doesn’t bother me.  We won the championship.  That’s all that matters.  It’s all about winning.”