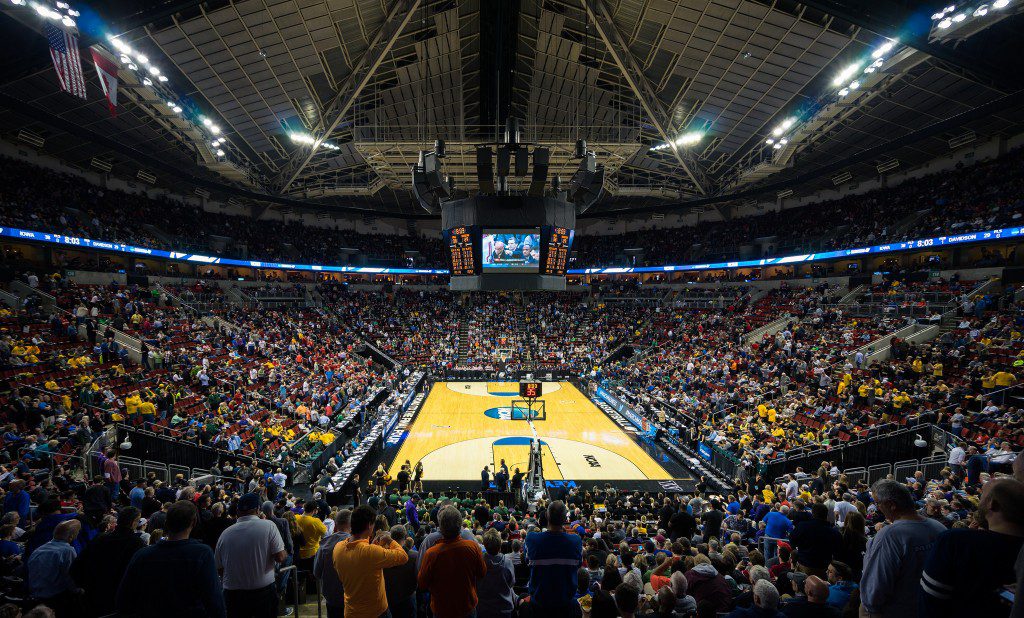 As you can tell by the title of this column, this is the third time I’ve created/re-created a March Madness Manifesto; a guide of how to successfully fill out an NCAA Tournament bracket year after year by using specific trends, analysis and some gut instinct. In theory it was a terrific and noble idea, doing my part to try to assist others in winning bracket pools. Each of the last two years all theories and rules have been well-researched and carefully thought out. After I finished each version I was completely and utterly convinced that I was on the verge of a major breakthrough in picking NCAA Tournament games.

You know why I’m introducing the March Madness Manifesto, Version 3.0 today? Because the first two times around I absolutely sucked at filling out my own bracket. I’m not trying to lie to you guys. I sucked, I have always sucked, and the fact that I’m here masquerading as some kind of expert and you are reading what I have to say is truly baffling.

I’m sure you’re thinking to yourself, “Fuck this guy and his shitty advice,” but hold up for just a second. Like I mentioned before, in theory everything you will read here today makes sense and it should lead you to great success in your NCAA Tournament Bracket pools. The big problem is the NCAA Tournament is more unpredictable than any other postseason you could try to navigate through. By following the rules I’ve laid out here today you will do well picking tourney games most years. I’m just hoping it’s this year. Let’s get after it!

Friends, you don’t want to be this guy. A 16-seed has beaten a 1-seed as many times as a 19-seed has beaten a 1-seed. There are no 19 seeds in the NCAA Tournament. I know, I know … it’s awfully tempting. It’s natural to wanna be the guy who called it the first time a 16-seed toppled a 1-seed, and it’s an especially tasty prospect this year since the four 1-seeds have more combined losses than any other group of 1-seeds in Tournament history (and think about the position I’m in … my FGCU Eagles are a 16-seed, so I basically lose my diploma if I don’t pick them to pull off an upset over the North Carolina Tar Heels). If you are going to talk to me about how you like Hampton over Virginia, you better include the words, “getting twenty-three and a half points.” Just resist the temptation. You don’t want people to make fun of you, and you also don’t want to ruin your chances of winning a bracket pool in the 1st Round.
RULE NO. 2: Do Research on your Cinderella Picks

a: History says a few 12-15 seeds will advance past the 1st Round, and a few more 7-15 seeds will get out of the first weekend of the tournament.

Over the last ten NCAA Tournaments there have been 160 1st Round games of the 5 vs. 12, 4 vs. 13, 3 vs. 14 and 2 vs. 15 persuasion … 34 of those 160 games have been won by the lower seed. Basically, what we’re looking at here, is nearly one out of every four of these match-ups will result in an upset. Sure, it’s not a staggering figure, but it’s enough to make you think about going all chalk in Round One. I assume you’re curious to know a little more about these upsets, so here’s the breakdown of where they have taken place over the last ten years.

The next logical question you should be asking yourself is, “Well what about upsets past the first round … how often do those happen?” Hey, great question by you! The answer: Of the 160 teams that have been in the Sweet Sixteen over the last ten years, 36 have been seeded 7-15. That’s nearly four teams per year, or, perhaps an easier way to look at it, one team per region. The tricky part is always identifying what teams each year are your best bets to make a deep-ish run. Let’s try to figure that out.

So who’s currently on hot streaks? A Missouri Valley team has made the Sweet Sixteen in three of the past six NCAA Tournaments, including last year when 7-seed Wichita State upset their in state rival Kansas Jayhawks in Round 2. How about a not-exactly-a-mid-major Atlantic 10 team making at least a Sweet Sixteen run in three of the last five tourneys. I personally have VCU (A-10)upsetting Oregon State in Round 1, and Missouri Valley champ Northern Iowa making a Sweet Sixteen push. And don’t sleep on A-10 champion Saint Joseph’s giving Oregon a game in Round 2.

In case you needed a reminder of what the Davidson Corollary is, here’s what I wrote two years ago:

“Back in 2008 when Davidson made a run to the Elite Eight (and damn they were close to shocking Kansas and making the Final Four), the blueprint wasn’t as simple as ‘We’ll ride Stephen Curry’s hot streak to as many wins as possible.’ It was set in the regular season when Davidson played North Carolina, Duke, UCLA, and North Carolina State. Sure, they lost every one of those games, but not by a wide margin. The Wildcats proved to themselves that they could compete with the big boys and that confidence carried over to the NCAA Tournament. VCU and Butler followed this model in 2011, when they played a combined twelve games against Tournament teams in the regular season.”

This holds up almost every year. Even last year, when the only big surprise in the Sweet Sixteen was 11-seed UCLA, it was a battle-tested Pac-12 squad (that shouldn’t have even made the tournament, but that’s beside the point). The candidates I’m intrigued by this year are Chattanooga (they won at Georgia and at Dayton, and they also played Iowa State on the road), Iona (they had road games at Oregon State, Valparaiso and Tulsa, plus they beat Monmouth two of the three times they played them this year), Northern Iowa (they had North Carolina, Iowa State, Stephen F. Austin and Hawaii on their non-conference schedule, plus they played Wichita State three times) and maybe even Yale (road games versus Duke, SMU and USC).

And last but certainly not least, my favorite sleepers this year … the Gonzaga Bulldogs and Wichita State Shockers. I enjoy both of these teams much more as a Cinderella candidates than I do a tournament favorite and this year they’re back occupying that comfortable niche. They each had to navigate through a difficult schedules and 11-seeds have a good track record of effing up brackets.

RULE NO. 3: Don’t Forget the Importance of Good Coaching

This was formerly just a sub-point, but it’s way too important to overlook so it needed to be turned into a rule. More than in any other sports postseason, good coaching matters in the NCAA Tournament. The talent gap between mid-majors and the traditional powers is shrinking, and in a one-and-done format where you will only get one day of preparation for your second, fourth and sixth games, the coaching edge means more than people realize. You should know who is coaching and what their recent track record looks like. For example:

You can usually trust Rick Pitino to throw one hell of a party for his recruits and players (He’s had four straight tourney runs that extended at least to the Sweet Sixteen), Tom Izzo (Made it to the 2nd weekend of the tourney 7 of the last 8 years, three Final Fours in that same eight year span – 6 Final Fours in his career … he’s basically a Coaching God), John Calipari (He hasn’t been knocked out in the first weekend of the tournament since 2004, and he’s been to the Final Four in four of the last five tournaments), and Sean Miller (the last six times Miller has taken a team to the Big Dance they’ve made it to at least the Sweet Sixteen).

This doesn’t necessarily mean you should fill out your bracket solely based on who’s on the bench; but if you’re stuck on a match-up between two teams that are seemingly even across the board, just look at the coaches.

RULE NO. 4: If You’re Stuck, Dig Deep And Find Unique Ways to Make Your Selections

I’m not talking about picking based on a teams colors, mascot or location (though that shit works a frustrating amount of the time … nothing is worse than watching a ton of college hoops all year long and getting beat in a bracket pool by your mother when she picked games based on where she’d most like to live). I mean finding odd trends, statistical nuggets or anomalies and using those to make some of your selections. The trend du jour that I found for this year is looking at the seeds of each team in the Sweet Sixteen over the last ten years, and looking at what region they were in. Did you know that the East Region representative in the Final Four has been a 1-seed only once in the last ten years? Or how about how the 1-seed in the South Region has made the Final Four seven times in that same ten year span. This is the kind of stuff you look at when you stay up until 3 A.M. every night.

RULE NO. 5: When In Doubt Pick The Teams That You’d Bet Your Life On

Last year I introduced this rule, and I lost two of my four Final Four teams in the first three days of the tournament, including my runner-up selection in the very first fucking game of the tournament (and no, I have not made up with the Iowa State Cyclones since last March). Ultimately, Cinderella runs usually end in the Sweet Sixteen or the Elite Eight. When you pick your Final Four teams you need to be selecting the teams you’d feel most comfortable backing if your life relied on them making the Final Four. In an ideal world you want a tested team with that has plenty of talent, great coaching, a steady backcourt (or at the very least, a steady on-court influence; an extension of the coach if you will) and an easy enough road to a title.

So who are my Final Four selections this year? I’ve got Kansas winning the South Region (making it eight of the last eleven years the 1-seed in the South has advanced to the Final Four), Oklahoma winning the West (because I don’t totally trust Oregon and I’m head over heels in love with Buddy Hield), Kentucky in the East Region (it’s the perfect storm really; they’re not a 1-seed, John Calipari is the coach in the region I trust most and the Wildcats have the best backcourt duo in the tourney with Tyler Ulis and Jamal Murray) and Michigan State in the Midwest Region (because of Izzo, Denzel Valentine, an experienced roster and momentum).

My champ: the Spartans, because if someone held a gun to my head and told me to pick a champion, Michigan State would feel like the safest bet. And even if Sparty didn’t cut down the nets and I died a bloody death, I know Tom Izzo would be waiting for me in heaven. Enjoy the madness.