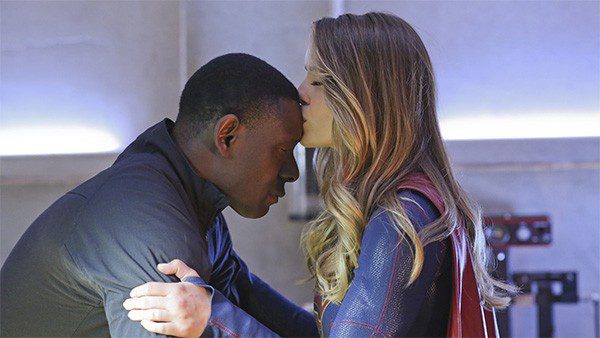 Season one of Supergirl ended the same way most of its episodes do: feeling rushed but well intentioned. With Supergirl’s renewal still up in the air over at CBS I wish that the writers had pulled out their big guns for its finale, but despite some really great acting and one liners (mainly courtesy of Cat) the episode was predictable and unsuspenseful.

The finale picks up right where last episode left off: smack dab in the middle of a fight that what I’m assuming was not Alex and Kara’s worst fight – try ruining your older sister’s favorite shirt that you borrowed without asking and then see what happens.

Of course we knew that neither one would actually kill the other, so it isn’t too shocking when J’onn (who had gotten stabbed last episode but is fine) shows up with Eliza Danvers to attempt to talk some sense into Alex.

Right as I thought that Alex was about to go all Kylo Ren on her mom’s ass, she snaps out of it. Something about hope breaking through the mind control causes you to suddenly remember yourself. Supergirl, with the help of super genius Maxwell Lord, whose tech wizardry has no limit apparently, then uses this same tactic to free the rest of National City from Myriad’s grips.

Before you’re even allowed to finish thinking, “huh, that was easy enough,” Max waltzes into the DEO (do they not have security?) with news that Non’s new plan involves head exploding. Not like, wow, you just blew my mind, but literal exploding of heads.

Of course Kara’s first thought is to go say goodbye to everyone she loves – which isn’t obvious at all. Cat still hasn’t caught on to the fact that Supergirl and her trusty assistant are actually the same person, but she catches on to Kara’s “dictated suicide note” rather quickly.

When Kara is finally done wasting precious time she sets out to find Non, who has been hiding in Fort Roz this whole time. Why no one thought to check there before that is beyond me, and thankfully Kara gives General Lane some well deserved shit for leaving this amazing hiding place for aliens just lying around.

The fight scene that follows may be the best scene from the entire episode, because of how mildly gruesome it got. It’s no shock when J’onn and Supergirl win the fight, because, duh, they’re the good guys and this is a show about hope, dammit. However, I did let out a very loud “holy shit” at how the pair won the fight.

Kara wins a Harry Potter and the Deathyly Hallows Part Two-inspired standoff by burning her uncle’s eyes out and J’onn rips a chick in half. Yeah, it’s her uncle by marriage, not blood; and sure, you could argue that Indigo was more like a sentient and very bitchy robot, but, damn. That was the most bad ass this show has gotten and I’ll be damned if I wasn’t impressed.

Unfortunately, killing the only people who can turn off Myriad means that Kara has to sacrifice herself for the planet Earth. Kara and Alex’s touching goodbye in turn wins the best dialogue from the finale, because, despite the fact that I knew Kara wouldn’t actually die and Alex would disobey orders yet again to save her sister, both Melissa Benoist’s and Chyler Leigh’s performances nearly had me in tears.

Before I knew it the episode was already coming to a close with yet another great touching moment, this time between Cat and Kara. Their relationship has been almost as important throughout the season as Kara and Alex’s, so it was really great to see its culmination in Cat’s first ever correct pronunciation of the name Kara. I was really hoping that Kara’s thank you to Cat for her new promotion (to any job she wants, by the way) would be Kara finally confiding her secret identity to Cat, but I was sadly disappointed.

Luckily, we have all next season for that if the show gets renewed. The CEO of CBS has hinted that a second season is likely, so I’m holding out hope. Supergirl just can’t end here, so many questions will continue to haunt me for the rest of my life, just like Joey still does.

Like, who is in the twin pod that crashed in the last seconds of the episode? Will Alex and J’onn ever find Jeremiah and Project Cadmus? Will Alex and Max finally get together (that hand holding, though) and usurp James and Kara as the reigning couple?

All I know is the writers better use this summer to get their shit together so that we don’t have to wonder about the fate of Supergirl anymore. They have so much potential, not only with next season’s plots, but also with the show in its entirety. I know that Supergirl can become the show that it deserves to be, if CBS just gives it another chance. Hell, if not just give me a show that is all Cat all the time.