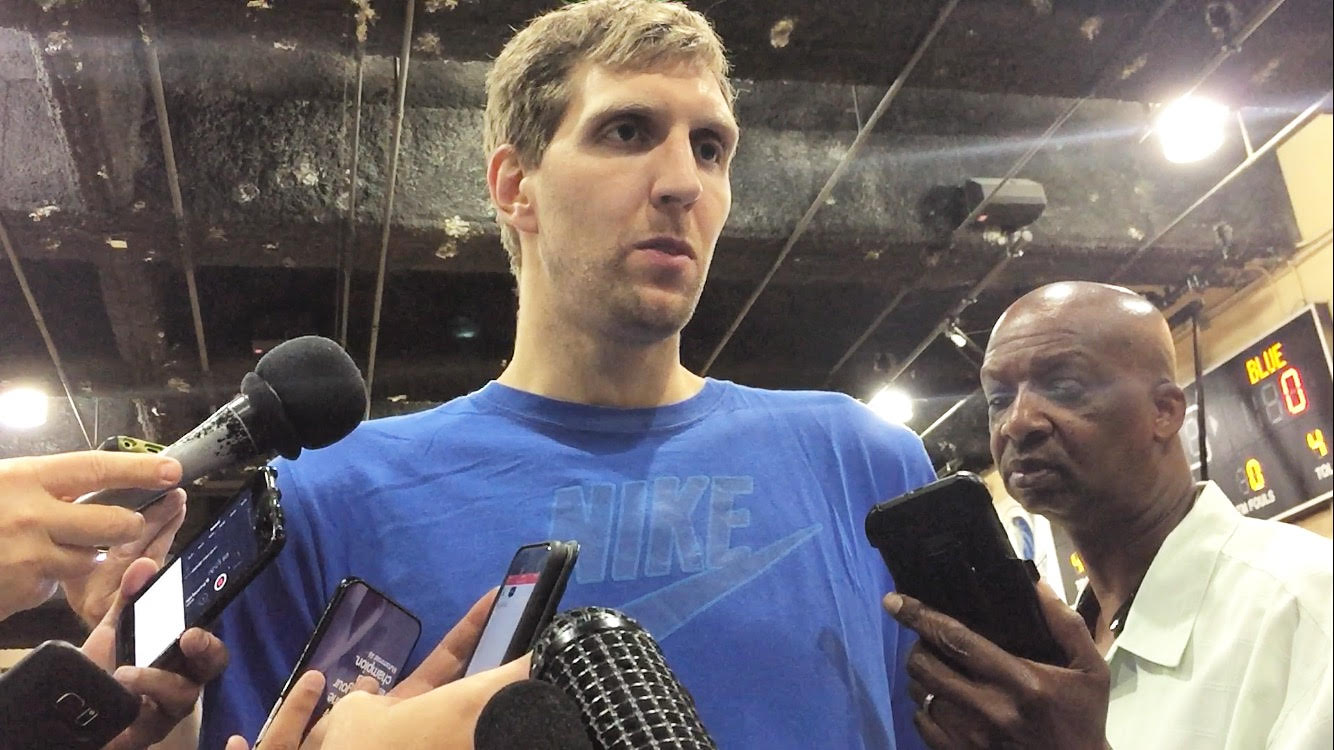 When I first faced him two years ago, he was simply a spec on the far end of a practice court, his larger-than-life frame faced toward the very far end of the practice court wall. His eyes were (invisible to me) focused on something beyond my measure of thought as Dirk Nowitzki turned his head only a fraction to acknowledge the older man standing to his right as the man tossed him the ball. The older man in question was Holger Geschwindner, Dirk’s mentor and close friend, who had flown in from Germany in order to aid Nowitzki with his shot in time for the 2013-14 NBA playoffs. When Dirk finally approached the media, I craned my neck straight up and was blessed with an up-the-nostrils view of a living legend.

Fast forward to a crucial Game 4 between the Dallas Mavericks and the Oklahoma City Thunder at the tail end of round one of the 2015-16 NBA Playoffs. During the final seconds of yet another near blow-out loss for the home team, the Mavericks loving crowd started to act accordingly as they watched the 37-year-old Nowitzki shake off Mavs’ head coach Rick Carlisle as the older man attempted to take him out of the game. Chants of “DIRK” began to echo throughout the American Airlines Center and began to drown out the irritating chirping of smug Thunder fans who made the trip out to Dallas.

Like the media that night, the crowd was worried that they were seeing the final swan-song playoff performance of one of the best NBA players to ever grace the sport.

After heading back to Oklahoma City for Game 5 and losing the series 118-104, a dejected yet positive Dallas Mavericks team arrived back to their city and gathered on their practice court with the press for exit interviews.

The press had their purpose: ask the appropriate questions to the handful of key players on where they believe their fate rested during the upcoming offseason. Mainly Chandler Parsons, who suffered two begrudgingly knee injuries over past couple postseasons and is believed to opt out of the final year of his contract and Deron Williams, who will do this same. The media wanted to get Wesley Matthews take on this particular Mavericks team and assess rookie Justin Anderson’s outlook on his first big year in the league.

But mainly, they wanted to know whether a certain Big German would be returning to play the following year.

Here are a few of the major topics that were discussed during the Mavericks 2015-16 exit interviews:

Some of the highlights include Parsons talking about recruiting Dwight Howard from the Houston Rockets, J.J. Barea’s young son playing around with a sound guy’s microphone, Raymond Felton talking about moving to Dallas indefinitely, Anderson crashing Matthews’ interview, Carlisle making fun of the press, and of course, Dirk talking candidly about retirement.

Until next year, Dallas Mavericks.