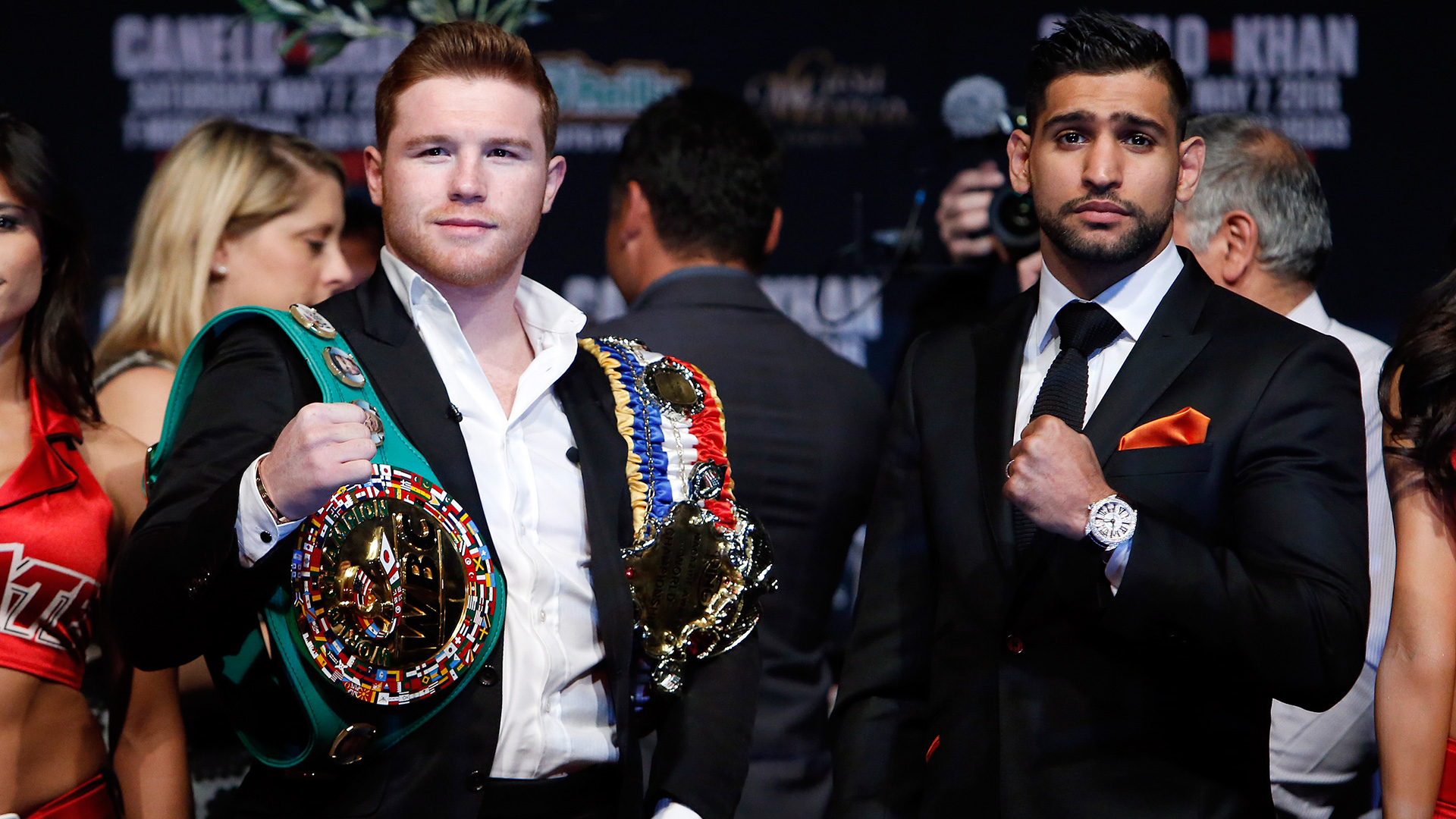 May 7 promises to be a great night in Las Vegas as the first boxing event hosted by the T-Mobile Arena at the MGM Grand commences. Saul “Canelo” Alvarez, boxing’s biggest only crossover star in the post-Mayweather/Pacquiao era, headlines a card against the slick, quick Amir Khan. Few observers give Khan a legitimate chance to dethrone the lineal and WBC Middleweight champ, but this fight has never been about May 7, instead the post-fight intrigue of Canelo’s willingness, or lack thereof, to square off with Kazakhstan’s Gennady “GGG” Golovkin.

Canelo’s journey to his Middleweight championship is as incidental as GGG’s journey to be the undisputed Middleweight champion is intentional. Former lineal champ Sergio Martinez wisely avoided GGG – and based on how badly his body broke down in the Cotto fight, the wise move was dodging a taste of Kazakh Thunder. Cotto is too undersized to be a legitimate Middleweight, making no bones about avoiding Golovkin. The Canelo-Cotto fight represented big money, and because GGG is the WBC mandatory challenger, both Canelo and Cotto’s camp had to pay GGG to step-aside money for their fight to commence.

The same GGG one month prior to the Canelo-Cotto fight eviscerated David Lemieux – the IBF Middleweight champ. Lemieux is one of the hardest punchers in the Middleweight division, and his best punches failed to halt the continuous assault of GGG.

Canelo’s promoter, Oscar De La Hoya, did not want Canelo to be a prohibitive underdog in his first defense of the lineal and WBC Middleweight title. An agreement was negotiated for Canelo and GGG to fight interim bouts.
Two weeks ago GGG fought IBF mandatory challenger Dominic Wade. Wade didn’t last 6 minutes. He was knocked down thrice before the referee ended the carnage.

After the fight GGG, who refers to his boxing approach as “Mexican Style”, said, “I want my belts.” He’s on a mission.

Amir Khan’s entry into the Canelo-GGG drama is of the role “legitimate adversary.”
Consider the divisions Khan has fought – Lightweight, Junior Welterweight, and Welterweight. The limit on Welterweights is 147 pounds. The Middleweight limit is 160 pounds.

That’s right – Khan is jumping 2 weight classes. Granted, the bout with Canelo is being fought at a catchweight of 155 – a point to be addressed later – but the enormity of Khan’s task is thusly illustrated.

What Khan represents is a world-class adversary providing Canelo with a moderate but not overwhelming difficulty. Khan is quick; he unleashes ridiculous combinations with ease. Yet Khan’s punches will be the equivalent to pelting the Empire State Building with playground pebbles.

Khan’s other problem is a perception of a glass jaw. He’s the perfect opponent for Canelo’s first Middleweight defense!

Khan’s rationale is he’s fighting the biggest draw in the sport and with a good performance gains greater legitimacy in the crowded Welterweight division and possibly secures fights against Welterweight champions Danny Garcia, Kell Brook, or Keith Thurman.

Of course Khan believes he can win – fighters must suspend disbelief regularly – but his promoters know a loss to the bigger, stronger Canelo is a loss only on paper.

This is one of boxing’s rare circumstances where a loss is an undeniable win because Khan will put on a show as long as it lasts.

GGG is attending the fight Saturday. The first question Max Kellerman asks Canelo after the fight surely is GGG-related. Kellerman may even ask about boxing’s newest weight division, Caneloweight.

Canelo’s trainers claim that he is a true junior middleweight instead of a true Middleweight. The difference is between a division below 154 pounds and one below 160. Canelo and Cotto fought at 155 catchweight and now Canelo fights Khan at the same catchweight. Canelo’s trainers insist that 160 is just too big and their fighter is too young.

After the weigh in and subsequent rehydration, Canelo weighed nearly 170 for the Cotto fight; Saturday promises the same disparity.

This insistence on a catchweight is anathema to hardcore fans. Canelo is not exactly a mover in the ring, so being light offers little advantage except to weaken his opponent drastically. Cotto and Khan are exceptions to this strategy because both are Welterweights/Junior Middleweights. Golovkin is a different story.

GGG only fights at Middleweight, and usually makes weight around 159. After rehydrating the Kazakh is nearly 170. Sound familiar?

Canelo and his camp’s insistence on a catchweight perpetually delays this fight. The transparent strategy of weakening Golovkin turns off casual fans. Canelo talks often about legacy and fighting the best. The bottom line is a victory over a catchweight Golovkin is more harmful than helpful. They know Golovkin’s people won’t agree to such a stipulation.

Meaning, if this fight doesn’t happen in September or next May, the strategy employed by Canelo’s people is to wait for the 34-year-old GGG to age into his mid to late 30’s when Canelo enters his prime.

Because GGG is WBC mandatory challenger the winner of the Canelo-Khan fight has to deal with him. If Khan wins, Canelo will demand his contractually guaranteed rematch, and who knows if he will negotiate with GGG after winning the rematch. That’s too far down the road though and unlikely.

The likely outcome is for Canelo to dispatch Khan in the middle rounds. He will work Khan’s body to neutralize the Brit’s speed advantage. Khan will become a stationary target – Canelo’s best fights are against guys who don’t move. Khan’s chin will undermine his spirit, and a delighted Kazakh will be ready to negotiate.

Floyd Mayweather’s legacy is tainted because he strategically picked out his opponents to protect his unbeaten record. His place in the Boxing Hall of Fame is secure, but only ardent Mayweather fans miss his antics ducking live opponents to fight shopworn varieties of great fighters. Canelo talks often about legacy, about wanting to be loved and making history.

The move is to make an agreement after Khan to fight GGG in September or next May with no catchweight. Canelo will probably lose because Golovkin is far superior in all aspects of pugilism.

However, as a boxing fan, I will no longer be ambivalent about Canelo – I’ll be a fan because he will do something simple – fight the best guy in his weight class.