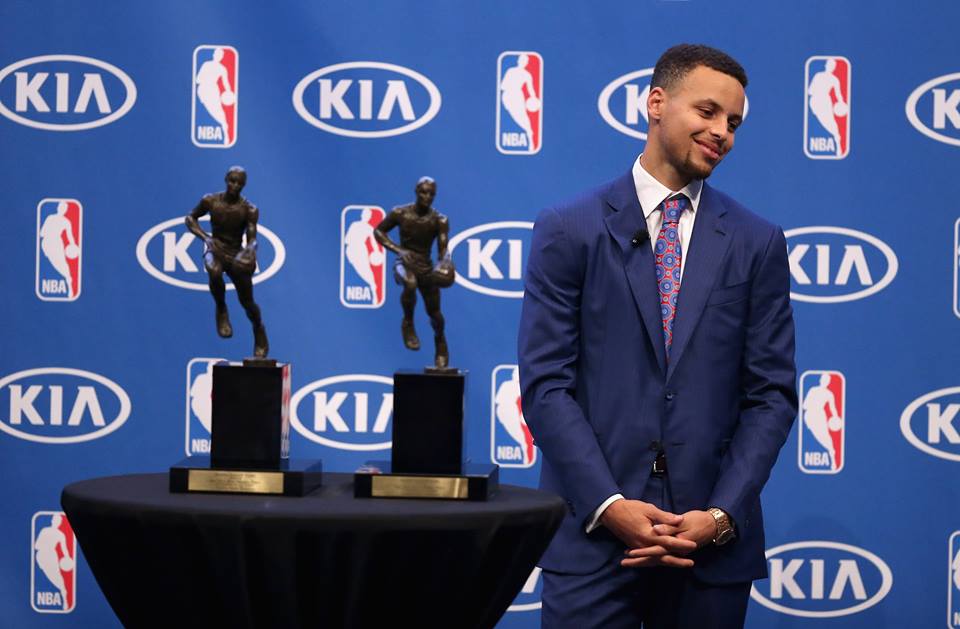 We’re down to the NBA’s Final Four, and that means it’s that point in the postseason where we can seriously begin considering all of the historical ramifications for every individual left in the Playoffs. There isn’t another professional sport that emphasizes the individual performance and achievement as much as pro basketball does, and that’s why you here the term “Legacy” thrown around so often. I’ve taken if upon myself to create a legacy watch in order to figure out who has the most to gain, and lose, over the next month of NBA action.

It depends on what happens with the Golden State Warriors. Regardless of how the Dubs season turns out, there will always be a large group of NBA fans that will scoff at you if you dare suggest anyone is nearly as great as the almighty 96 Bulls, despite the fact that after the “Big Three,” the rest of the supporting cast looked like this: Toni Kukoc, Luc Longley, Ron Harper, Steve Kerr, Bill Wennington, Dickey Simpkins, and Jud Buechler.

First Drake dropped Views and it debuted at #1 on the Billboard 200 Chart. Then, just two nights ago, he had a strong showing on Saturday Night Live. And now he’ll get reps as the marquee celebrity fan for a team in the Conference Finals. Drizzy is having a really big Spring, doing some really nice things, hoping the Raptors can win some really big rings. What a time to be alive.

The closer we get to Steven Adams edging past Serge Ibaka as the third wheel in Oklahoma City’s Big Three, the closer we’ll get to the public opinion of the James Harden trade swinging in Oklahoma City’s favor, and that combined with the fact that Harden came into the season out of shape, wouldn’t be any fun to play with, and wholeheartedly doesn’t give a shit about playing defense will continue to sour the the collective pallet of NBA fans who want to believe James Harden is a superstar.

Not sure exactly what an improbable title would mean for Lowry and DeRozan. My best guess: they’d take on some sort of complicated legacy similar to that of Chauncey Billups and Richard Hamilton, though Lowry and DeRozan will need to be much more potent than the Pistons’ duo was in 2004 if they are going to hoist the Larry O’Brien Trophy in June. I’ll be honest, I’m at a loss for words. There’s no solid historical precedent for the Raptors winning the championship.

Lumped together because they’re remarkably similar players (elite offense, lackluster defense, both could be viewed as expendable down the stretch in close games because of their defensive shortcomings, either one might end up being the scapegoat if Cleveland doesn’t win the championship) whose level of involvement and output over the next two rounds will likely dictate what sort of success the Cavaliers have the rest of the postseason. If the Cavs continue to bomb three’s, play small ball, and ride Kyrie and Love while allowing LeBron to pick his spots all the way to a title, the legacies for two fringe superstars are drastically changed, and LeBron’s interest in continuing to play in “The Land” could be increased. If the 2016 Cavaliers turn into the 2007 Cavaliers over the course of the next month, we’ll be back to square one, wondering whether either Kyrie or Love can even be relied on in big games.

With a Warriors title Kerr would become the 14th coach to win two championships, the 8th coach to win in back-to-back years, and the 7th coach to win Coach of the Year and an NBA Title in the same season. Oh yeah, and counting postseason wins and losses, the Warriors are 164-31 since Steve Kerr became head coach two years ago. That’s a nice little resume he’s built for himself, huh?

He’s only eight wins away from joining Larry Brown as the only coach to win an NCAA National Championship and an NBA Title. He’d also be the founder and sole member of the Two NCAA Titles, One NBA Title Club if Oklahoma City gets over the hump this year. And over the last three months he’s wiped away almost all initial worries that he wouldn’t cut it as an NBA coach. He figured out that the Thunder needed to stagger Westbrook and Durant’s minutes. During the the Spurs series he rode the Adams/Kanter line-up in crunch time because San Antonio had no answer for it. And if he can permanently solve OKC’s late game offensive struggles AND find a way to craft a defense that can bother the Warriors high octane offense even a little bit, Oklahoma City has a chance to upset the Dubs and win a title.

Playing for the “Undisputed Best Shooting Guard in the League” crown, if he doesn’t have it already (In my humble opinion: Klay already has it). He’s also playing to give the Splash Brothers some major momentum as one of the best backcourts in NBA history. Just imagine if Klay and Steph are each scoring nearly 30 every night and drilling five threes per game throughout the rest of the postseason and the Warriors cruise to a title … that’s definitely a legacy changer. And the funny thing is, Klay Thompson isn’t even the second best player on the Warriors.

Here’s what’s on the line for Draymond: A bunch of “Draymond was the real leader and Alpha Dog on the Warriors” stories if Golden State wins the title. It means we’ll see a surge of teams trying to find their own Draymond Green, even though that’s absolutely impossible because there isn’t anyone in the entire league that brings all the stuff that Draymond does to the table. It means he’s forever mentioned in the same breath as Stephen Curry as the catalysts of a small-ball/three-point shooting revolution, and that’s not a small distinction. It means the NBA Draft process will be altered permanently since teams will be more apt to take a shot on the undersized four year players who were well-coached and legitimately give a shit about being great at basketball. And whatever this means nowadays, a strong showing over the next few weeks puts Draymond in the Best All-Around Basketball Player Alive conversation.

I’ve been waiting all season long to write a Durant and Westbrook piece. Regardless of how the West Finals look at the time, we’re about a week away from it being the perfect time. Let’s hold off for now.

There are three scenarios in play:

Scenario 1: Steph’s knee or ankle injuries pop up again and then we’re never totally sure what to make of the legacy of the 2015-16 Golden State Warriors. Also, this is the worst possible scenario, not even because it means the league’s brightest star is shelved. There needs to be some clarity at the end of this season, and if Golden State limps to the finish line we don’t get that.

Scenario 2: The Warriors win the title in June and are mentioned in every single “Greatest Team Ever” discussion for the rest of time. Plain and simple.

Scenario 3: They drop four out of seven in one of the next two rounds and take on a legacy similar to that of the 07 Patriots … a regular season juggernaut that was the best and most talented team in the league, but they got worn down from the raised stakes of playing for GOAT status and took on a bad matchup in the Playoffs and things fell apart.

This is the fourth year I’ve done this Legacy Watch column heading into the Conference Finals, and it’s the first time LeBron hasn’t been No. 1 overall. Have four losses in the NBA Finals damaged his legacy in the eyes of most? Sure. Maybe damaged isn’t the best word. It would probably best to say that his legacy just doesn’t have the same ceiling it once did, at least if he only wins one more Championship. Here’s what we know right now; even without another title, LeBron will go down as one of the five or ten best players in NBA history (depending on who it is that is compiling the list) … as an absolute freak athlete who, for at least thirteen years, never broke down … as a lightning rod for self-created, yet silly controversy … as one of the most versatile and well-rounded basketball players to ever live … as a bizarrely effective leader … and eventually, and I truly believe this, as a player who we never gave enough credit to while he was playing.

And still, this next month is fucking gigantic for his legacy. Crazy stuff.

Would it be absurd to believe that when it’s all said and done Curry could be a top 25 player ever? Someone who shattered the career three-point shooting mark, a member multiple times of the 50-40-90 club, a terrifying late-game scoring option and someone who frequently appeared in the top ten of scoring, assists, and steals each season? It’s there for the taking, and a great start to building this legacy would be a title in June. It would cement Curry as the new (baby) face of the NBA, an incredible crowning achievement for someone whose ascent to the top of the league has been just as surprising as it has been delightful to watch.

I’m just one year removed from writing that previous paragraph. That’s right. Last year in my Legacy Watch column I wrote all of that. Pretty spot on, isn’t it? He joined the 50-40-90 club last season (and the 50-45-90 club), hit 400 (four hundred) three’s in a season, cracked the top ten in scoring, assists and steals (and three’s made, and free throw percentage, and three point percentage, and field goal percentage in the paint … but that’s just gravy), posted one of the ten best PER’s ever, won the NBA MVP Award unanimously (the first time in NBA history), won 73 regular season games (most in NBA history) and gifted NBA fans more “Holy shit” moments throughout the course of an NBA season than anyone has in my time closely watching the basketball.

Again to my surprise, we already need to be re-calibrate the expectations I outlined only a year ago. Suddenly the “top 25” ceiling seems low, and I don’t mean that just in terms of pure basketball talent. No one has come close to possessing the combination of all-around offensive skills that Steph does; we know this already. The only remaining unknown is whether or not he can break into a stratosphere of super-stardom that only Michael Jordan has before, and whether the hardened 90’s NBA fans want to admit it or acknowledge it, Steph is on the cusp. He’s a basketball revolution all by himself, and the undisputed face of the league with a higher approval rating than any American athlete since MJ himself or young Tiger Woods. With a juggernaut of a supporting cast in place and a distinguishable individual drive, Curry could spearhead the next great sports dynasty. This is a once in a generation kind of spectacle. Watch and appreciate.