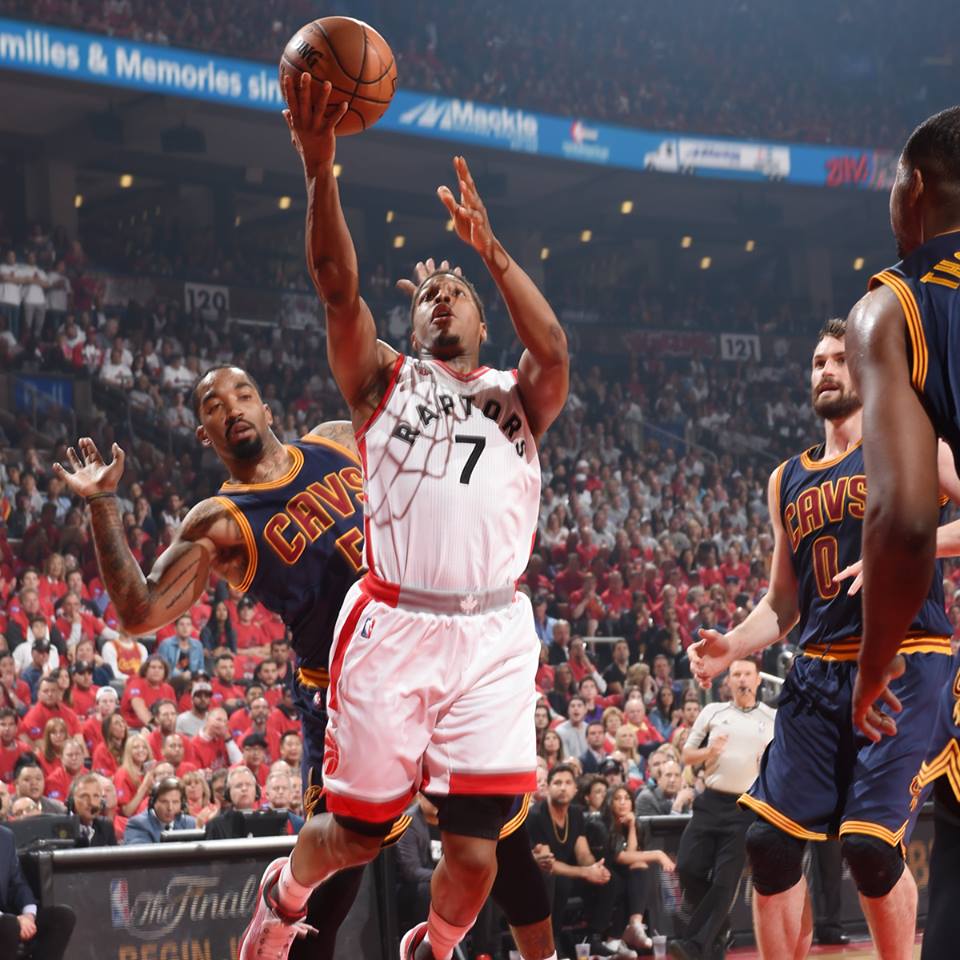 Kyle Lowry doesn’t give a damn about your approval.

From the endless Michael Jordan crying face meme’s to the viral scolding’s he took from peers and fans alike, when asked about the widespread criticism he’s faced since “decompress-gate”, the 2x All-Star said simply, “If you can’t take the heat, get out of the kitchen.  I can take it.”

With the weight of Toronto on his shoulders and Drake watching from a penthouse suite at the Ritz Carlton, Lowry and his counterpart, DeMar DeRozan, used a perimeter based offensive attack, combining for 20 first quarter points as the Raptors took an early 27-24 lead at the end of one.  Lowry, who shot an abysmal 8-28 FG (28.6%) in the first two games of the series, connected on three of five shot attempts (two three-pointers) for eight points before exiting the game with his second foul midway through the period.

With their floor general sidelined, the Raptors called upon former San Antonio Spur and Ontario native, Cory Joseph, to provide a spark in a time of desperation. Playing fast and moving the ball with confidence, Joseph and DeRozan fueled Toronto on a 22-7 run as the Raptors took a commanding 18 point lead with 1:22 remaining in the first half.  After a short skirmish between Bismack Biyombo and Tristan Thompson resulted in double technical’s, the Cavaliers ran off the final five points of the quarter – capped off by a LeBron James triple with 1.9 seconds left – to cut the Raptors lead to 13 (60-47) at the break.  DeRozan led all scorers with 21 points (8-14 FG, 5-6 FT) followed by Lowry who chipped in 11 (4-6 FG).  The always active Biyombo, who remains in the starting lineup as Jonas Valanciunas continues to nurse his sprained right ankle, was the X-Factor for Toronto; hauling down 16 first half rebounds despite grabbing a combined nine boards in the first two games in Cleveland. 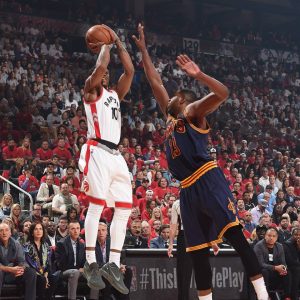 With defeat looming and “Jurassic Park” in a frenzy outside of the Air Canada Centre, the Cavaliers came out of halftime with a vengeance.  Following consecutive three-pointers and a powerful driving And-1 layup from LeBron, Cleveland cut Toronto’s lead down to six (62-56) just over two minutes into the 3rd.  The Raptors, though, would continue to push the tempo; upping their lead back to double digits behind a series of slashing baskets from DeRozan and a timely buzzer beating three-pointer from Cory Joseph that gave Toronto an 80-70 advantage on the scoreboard entering the final period of play.

In the 4th, a Patrick Patterson three-pointer followed by a Lowry layup ballooned Toronto’s lead to 15 with 11:06 left in regulation.  As victory set on the horizon, the Raptors went inexplicably cold; going scoreless over the next six minutes of play – helping the offensively deficient Cavaliers steadily creep their way back into the ballgame.  Leading by only eight with five minutes on the clock, the Raptors were given an unlikely scoring punch from their unsung hero, Bismack Biyombo, who ran off six straight points as Toronto handed Cleveland their first loss of the playoffs with a 99-84 victory.  Biyombo, who did not convert on a field goal until the 4th quarter, was a menace on the defensive end the entire night; swatting away four shots to accompany his record setting 26 rebounds (18 defensive).  “The way he rebounds, he almost reminds me of a guy like [Dennis] Rodman,” said Raptors head coach Dwane Casey after the game.  “He knows where the ball is coming off [of the rim].  He has a sense of where it’s coming off and he does a good job of doing that.”

DeMar DeRozan on his 32 point performance
“I was just being aggressive; picking and choosing my spots.  I wasn’t settling; wasn’t second guessing.”

DeRozan on Biyombo’s 26 rebounds
“He gives us that confidence.  He gives us that rim protection.  I think he had another game like this in Indiana where he had 25 rebounds.  He’s been doing a great job of filling in since Jonas went down.  He gives us a lot of energy.  He gets the crowd into the game and we feed off of that energy.  Four blocks and 26 rebounds; there’s no substitution for that.”

Dwane Casey on Game 3’s refereeing
“[Biyombo] is getting fouled so much.  He’s not getting the calls.  We shot zero free throws in the 4th quarter.  Zero.  It’s 73-46 the entire three games.  He’s getting hit.  The one play where there was almost a brawl, he got killed on that play.  I have to go back and watch it, but there has to be some consistency.  I’ll say it again: we have the greatest officials in the league, but how you can miss fouls like that, I can’t see it.  I’ve been in this league a long time.  There needs to be consistency.  A foul on one end needs to be a foul on the other.”

LeBron on Game 3 loss
“I’ll give a lot of credit to Toronto.  They played an exceptional game tonight.  We didn’t play our game and they made us pay for it.”

LeBron on his supposed “flop” after getting elbowed by Tristan Thompson
“I wasn’t trying to sell the call. I get hit with an elbow. I didn’t know it was from my own teammate, I thought it was DeMarre [Carroll]”

LeBron on 4th quarter flagrant foul from Biyombo
“At the end of the day, I’m important to this team.  I can’t afford to react in any kind of way that will get me thrown out of a game, but I will protect myself.  I always think back to the Jay Z phrase and a line he had: ‘If I shoot you, then I’m brainless; if you shoot me, you’re famous. What am I to do?’  That always plays in my head.  Every time I feel like I want to react, I’ve got to keep my brain.”