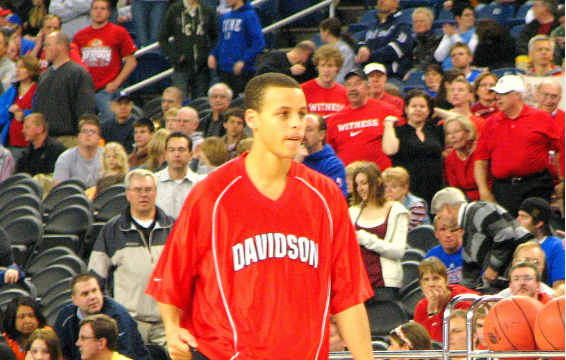 I remember sitting in my parent’s living room, flipping through channels, on an early Saturday morning. My options were very limited. With no good football games on, I continued to search for something that peaked my interest.

Perusing through station after station, working my fingers tirelessly, I finally stumbled upon the ESPN broadcast of a college basketball game.

Every year around this time, I’d always rely on a couple collegiate basketball games to give insight and knowledge, so I could make an educated guess for who I’d pick in my March Madness bracket tournament. March was coming up and I knew if I didn’t watch this game, I’d probably choose something else over the next one that came my way. Overall, I’d have no care in the world about such a game, but I realized that it was getting closer to March Madness, it was either watch now or wait until the tourney started.

The game was between a team I’d never heard of in Davidson, versus college basketball powerhouse Duke.

But the other team is where I was confused. First of all, how were they on national television? Usually these “cupcake teams” don’t get the television time like a Duke or Kansas would. Thankfully, I was tuned into the game about 20 minutes before it started, so I got some pre-game information on this unknown team.

Dick Vitale, ESPN’s College Gameday’s broadcaster, was covering the Saturday morning affair. It was about five minutes in and Dick had begun his patented “diaper dandy” talk on a sophomore named Stephen Curry. Now, I get it, we all know who he is now. But back then, virtually no-one knew who he was. Vitale elaborated on this talk, running down his numbers, statistical prowess, and excellent play. He even mentioned that his dad was an NBA great, but I couldn’t buy it.

I felt as though players from smaller schools who were half-way decent, would always have inflated numbers. Much because of whom they played and the talent drop-off, therefore it didn’t mean much to me. I still stayed optimistic that I’d get to witness a good game.

But even with optimism, I was under the impression that Duke would beat the living daylights out of this team. I mean, the broadcast couldn’t talk about Duke the whole time anyways, so I felt they were just searching for other story lines, which included Stephen Curry.

The game started and I begun watching to see how Oregon-native Singler would hold up. He was one of three stars on this Duke roster and it would’ve been the first time I would see him play with the Blue Devils.

But as the game progressed, it became apparent that either Duke weren’t as good as advertised, or this Davidson team was the real thing, as Duke was having trouble with Davidson. Specifically, the kid Dick Vitale was referencing in the pre-game show.

Stephen Curry, could clearly shoot from anywhere on the court and made Duke’s guards look defenseless at times. He was really creating opportunities for teammates against one of the best team defenses in the country.

I wouldn’t get ahead of myself, because he was showing some signs of vulnerability. He was turning the ball over and showed some inexperience, which everyone knows you can’t do against a team like Duke. But overall, through the first half, he had still impressed me.

While he was turning the ball over early, he still continued to have a niche on offense. Something I really hadn’t seen in a college player before. It was like he had this inner feeling of being able to make any shot he took. You could tell he had confidence, but a silent, almost cerebral confidence. Like Jimmer Fredette, only he wasn’t just about the points, he was reading the defense and picking them apart. Chucking up threes, getting rebounds over bigger players, doing anything on the court, despite his size, strength, or other undeniable, disadvantageous attributes.

That’s just it, he wasn’t physically gifted. A scrawny, average height guard, he was doing things that didn’t look possible.

On defense, he was a pest. Making Nolan Smith and DeMarcus Nelson work for every possession they had. Both of those players mentioned would eventually end up in the NBA. Giving you an idea of the talent he was playing against, if the Duke name wasn’t enough. Short of being cloned into teams of five, he was putting his team on his back, beyond the statistics.

Curry and Company continued to push Duke to the limit, starting in the second half. Duke got a lead and really started to pull away, but Curry didn’t let them get any further. He continued to lead by example and had five early points, to temporarily stop the Blue Devils from getting any further ahead. Later in the half, Stephen Curry had four fouls half-way through the second period. Yet he still managed to play the rest of the way without getting fouled out, proving his high basketball IQ.

Where most guys would’ve made a mistake or gotten that fifth foul, Curry didn’t, showing signs of maturity and knowledge to not get fouled out.

Eventually, the Blue Devils would win the game, due to the talent and depth of their roster. But an unexpected, close fight with this Davidson team is what kept me watching, not with the team I’d come to watch. The team with a guy named Stephen Curry.

Some of the points I witnessed, didn’t even add up until I sat down to write this article. But I think when I look back, this was the start of something great. It was watching a truly special competitor and player trying to effect the game in every way, all-the-time. The game came to an end, with Curry having 20 points, on 4 of 7 shooting. I understand this isn’t anything historical, but his game on the court was beginning ascension. He was a star on a small-school and I think everyone just assumes he was always this great player to begin with.

I look at him now and I see a built, athletic, and smart NBA great. But when he was at Davidson, he wasn’t always that. As I said previously, he had turnover issues, possibly from the lack of talent on his team, but nonetheless turnovers were an issue. He also didn’t look like he’d been in the weight room, possibly didn’t even know what weights were. Curry, while being talented, wasn’t necessarily a defenders nightmare at the time either. He gave defenses trouble, but in college, Adam Morrison did that.

I think his lack of being born with some special or physical trait made me like him even more. In college, he was of average size, build, and wasn’t known as this physical specimen. Watching him, he made me feel as if I could play, or maybe even get to his level. I get that he came from NBA offspring, but still, if you walked by him at Davidson, you probably wouldn’t have assumed he was a great basketball player.

After this game is when I realized Stephen could be an NBA player. Not a great player, because he wasn’t strong, tall, or freakishly athletic like LeBron or Anthony Davis. At that time, he was also turning the ball over too much for my liking, to put him in that top guard conversation as well.

He commanded attention of defenders on every possession and Duke coach Mike Krzyzewski, knew it. Shortly after this game and headed into 2009, after Curry had developed more, Mike Krzyzewski eluded to just what we’re seeing today. He said ““He’s just never out of it. All the attention that you give him, it creates things for other people.”, which told me all I needed to know. A guy like Mike Krzyzewski, current U.S. national team coach, saying that about Stephen Curry was the validation for my feelings on him.

So what were NBA teams thinking at the time of the draft? According to Amin Elhassan, The Phoenix Suns in the 2009 NBA draft coded him as the “black Steve Nash“. So they knew what he could do and almost ended up shaking hands with Golden State to trade up for their pick to get Stephen.

While Curry was in college, the Suns even had a name for his could’ve been assists. As he was the only real option on the team, the Suns tracked how many “Lovedales” Curry would have. Lovedale, a made-up stat named after Andrew Lovedale, a teammate of Curry’s, was named after him because Lovedale was notorious for missing easy assists.

If people were having nicknames and made-up statistics about a player, clearly he was looked at as an elite talent. But I don’t think people could’ve expected what he’s done thus far into his career.

Obviously we all know the ending to this story, quite possibly all to well. Curry has developed into must-see television, on a team holding the league’s best record. I’ve just been impressed with the way he’s gone about it and how he’s able to do it. Night-in and night-out, Curry is the most polarizing NBA player, with his flashy moves, incredible vision, and ability to shoot from almost anywhere, Stephen Curry is quickly becoming the best basketball player I’ve ever seen. Either way, we’re watching history in the making.