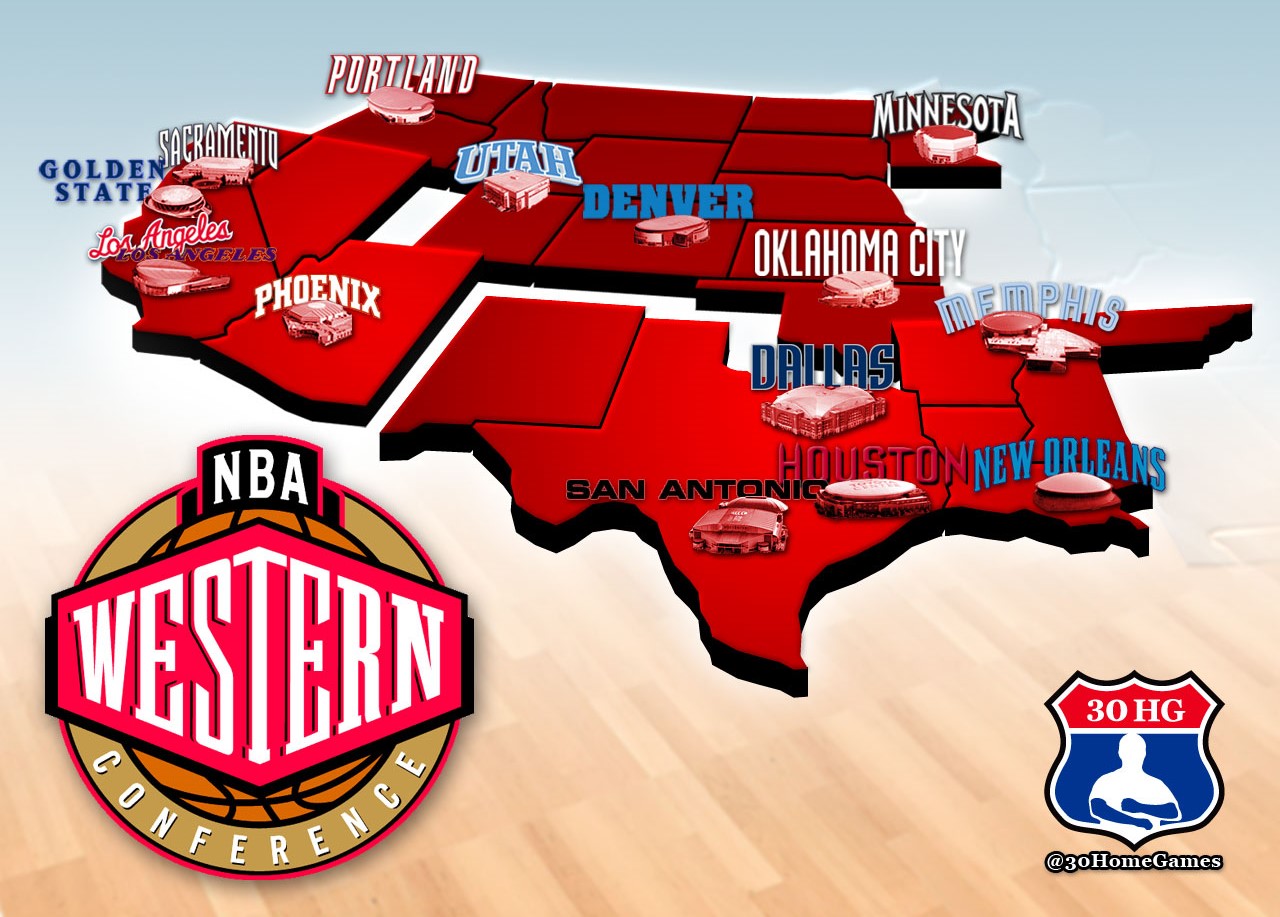 The Dallas Mavericks will probably have their hardest offseason to date, with four of their starters being free agents. Although Dirk Nowitzki is a free agent, he is not going anywhere and will finish out his career in Dallas. Deron Williams and Chandler Parsons have a history of injuries and one of both of them may not be re-signed by the Mavs, although they are key pieces to this team. Zaza Pachulia had a pretty good season for a big man and should be brought back for another go. Two of the Mavs’ best role players off the bench, David Lee and Raymond Felton, are also free agents. With all of these players hitting free agency, the Mavs have some tough choices to make before next season. The Mavs have one pick in the draft, which is the 46th pick, so they should strongly consider signing back their entire roster from last season. On paper, the Mavs could be a problem in the Western Conference if they stay healthy the whole season.

The Denver Nuggets actually do not have that bad of a team, but they were flooded with injuries all season. Many forgot that Wilson Chandler missed the entire campaign due to an injury, and he will be a great addition to have back on the roster. The Nuggets are still very young and need to focus on some players that they can build into something. The Nuggets have plenty of big men and need to draft either a guard or a small forward to come off the bench. The Nuggets, not only have the 7th overall pick, but they also have four additional picks, including the 15th and 19th overall picks, equating to three picks in the first round. The Nuggets need to take full advantage of this draft as it could change their franchise around for the better.

The Golden State Warriors have been to the NBA Finals back-to-back starting last season, so they do not really need to add anybody. In fact, they don’t even have any draft picks for this upcoming draft. Instead, they need to focus on re-signing players who are free agents. Leandro Barbosa and Marreese Speights are free agents and are key pieces to the Warriors success off the bench. The Warriors need to re-sign them so they can continue to be title contenders. Without a bench, the Warriors would still be good, but not as good as they are now. And the main question concerning free agency for them is, do you give max or close-to-max money to Harrison Barnes?

The Houston Rockets biggest question this offseason is: Will they re-sign Dwight Howard? Now, we all know Howard is not as good as he was with the Orlando Magic, but he has been in the league for 12 years, and can still play better than your average NBA player – Howard is still a top 10 center in the league and is still a threat on defense. Despite the Rockets not having as good a season, they did make the Western Conference Finals the season before, and lost to the eventual NBA champion, Golden State Warriors. Josh Smith is also a free agent and helped them advance to the Western Conference Finals. The Rockets need to re-sign both because if they don’t, they will not make the playoffs next season. The Rockets have two draft picks in this draft, but they are both in the second round. If the Rockets decide to part ways with Howard, they would need a big man in the draft.

The Los Angeles Clippers have made the playoffs the last five seasons, but have never made it past the second round of the postseason in franchise history. On paper, the Clippers have even had the best overall team in the league in the past five years, but they cannot get the job done. The Clippers have more to worry about this offseason, as NBA Sixth Man of the Year Jamal Crawford, Austin Rivers, Jeff Green and Wesley Johnson are all free agents.   These were the four best players off the bench for the Clippers last season. The team will most likely sign at least three of them back for next season and have two draft picks in the draft. The Clippers need to draft some quality big men that can backup Blake Griffin and DeAndre Jordan. Once the Clippers get some backup big men, they should be contenders for the Western Conference again with no problems.

Now that Kobe Bryant is gone, it is time for a new era in Los Angeles. The Lakers have lost the player that led them to seven NBA Finals and five NBA championships over the past two decades. The Lakers have the number two overall pick and the second pick (32nd) of the second round. As far as free agency, Roy Hibbert, Brandon Bass and Robert Sacre are all free agents. They need to use their second pick to draft a big man, regardless of if they resign any of them because none of those big men are good enough to count on throughout a season. It will take a while for the Lakers to make the playoffs again, but this draft is where the rebuilding process starts.

The Memphis Grizzlies had one of the worst seasons due to all of their injuries throughout the season. They had over 20 different starting lineups throughout the regular season and despite all this, still made the playoffs in a competitive Western Conference. The Grizzlies have a lot of free agents they need to re-sign or at least consider re-signing, including Mike Conley, Matt Barnes, Chris Anderson and Lance Stephenson. The Grizzlies should sign back all four players, so they can see how everybody plays together  healthy. The Grizzlies had so many injuries, that the team never played a full game together healthy through 82 games and the postseason. Mario Chalmers got cut after repetitive injuries, so the Grizzlies should definitely think about re-signing free agent Jordan Farmer. As far as the draft goes, the Grizzlies have two picks and should use them to draft some big men to backup, and maybe eventually replace, Marc Gasol and Zach Randolph.

The New Orleans Pelicans had a rough season with a lot of injuries and did not make the playoffs with a 30-52 record. The Pelicans have three big free agents in Eric Gordon, Ryan Anderson and Norris Cole. All three had great seasons and deserve to be re-signed. If one of them does not get re-signed, the Pelicans should use one of their three draft picks to replace that respective position. If they do sign all three, they should use their 6th overall pick to draft a PG or C because that’s the position they need better depth at, especially a big man. With three picks, including the 6th overall pick, the Pelicans could make a run at a bottom playoff spot.

One of the biggest names in free agency this season is Kevin Durant. The Thunder were up 3-1 in this year’s playoffs against the Golden State Warriors and blew it by losing three straight games to them. After that heartbreaking loss, the Thunder may be nervous that Durant could really leave. If Durant decides to stay, the Thunder need to find a consistent third scorer in free agency, seeing as though they have no draft picks this year. The Thunder have been a top 3 Western Conference team for the past 5-6 years. If they can finally find that third option, a championship will fall into their lap.

When guards Eric Bledsoe and Brandon Knight went down, so did the Suns’ season. So, it was essentially a waste for the Suns. The Suns have free agents John Leur and Mirza Teletovic to re-sign, as well as worrying about how to play their players after rookie Devin Booker had a breakout season due to the team’s injuries. In addition to the 4th overall pick, the Suns also have the 13th overall, 28th overall, and the 34th overall picks as well. This is the season for the Suns to get back in the playoffs. In addition to Booker, Knight, and Bledsoe, they also have Tyson Chandler, Alex Len, Archie Goodwin and the aforementioned three first-round picks. The Suns can grab a bottom playoff seed next season if the chemistry is there.

After losing four starters last season, the Portland Trail Blazers led by Damien Lillard and CJ McCollum, finished 44-38 and were the 5th seed in the Western Conference. The Blazers have no draft picks, so they will have to make all their moves during the offseason through free agency and trades. Gerald Henderson was solid for them off the bench and needs to be re-signed. After the Blazers’ season, they could attract some names to come and play for them. Other than that, they just need to get their rotations down and they will be back in the playoffs.

The Sacramento Kings always have a pretty good team on paper, but have not made the playoffs since 2006. To make this situation even stickier, Rajon Rondo is an unrestricted free agent. Although there were times this season he did not get along with head coach George Karl, Rondo did lead the league in assists per game. The Kings also have two draft picks, including the 8th overall that they desperately need to use wisely. The Kings need a big man with both picks, regardless of if they re-sign Rondo or don’t. They have no depth at PF/C except for all-star DeMarcus Cousins. With this 8th overall pick, the Kings may finally have enough to make the postseason in the Western Conference.

The San Antonio Spurs know that Tim Duncan and Manu Ginobili are free agents and may retire. In addition, they have players like David West, Andre Miller, and Kevin Martin that are free agents. The Spurs have the 29th overall pick and should use it to draft a forward, typically one that can play the 3 or 4. The Spurs have Kawhi Leonard and LaMarcus Aldridge to lead them, so they will always be title contenders. They also have the vets Tony Parker, Boris Diaw and others to help with the Gregg Popovich system that is flawless.

The Utah Jazz missed the playoffs by one game, which nobody saw coming prior to the season starting. The Jazz have four draft picks, including the 12th overall pick. The Jazz need to use that pick to get a PG. After that, they need help at every position, so it is a matter of selecting the best player available and that being the case the season is over. The Jazz are very underrated and had on the of best defenses in the league the last couple of seasons. This draft could finally give the Jazz the help they have been seeking to get over that hump.