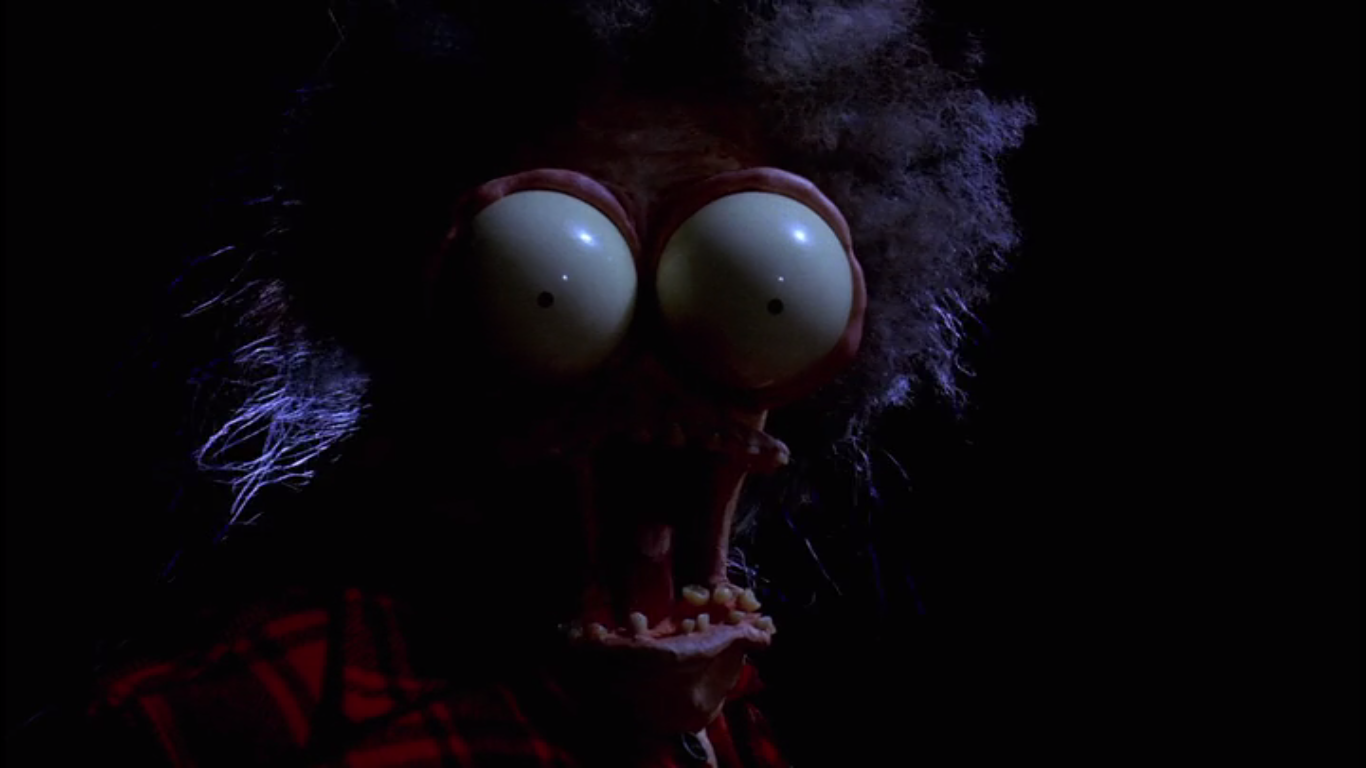 The year is 1999. I’m six years old, and my dad has recently returned from his job at the library with a copy of Pee-wee’s Big Adventure. After making some popcorn we settle onto the couch to watch this movie that my dad assured me I would love. At first it did seem like he had brought home a winner. And then it happened.

It being the horrifying, life-scarring scene in which a woman’s eyes pop right out of their sockets. I screamed bloody murder, and within seconds the movie was off. But it was too late. I cried for hours, as my dad, who was wracked with guilt, tried to calm me down. Neither my dad nor I slept for three days.

That brings us to the present, where I, a twenty-three-year old woman who’s still afraid of the dark, vowed to conquer this film that gave me nightmares for years after that fateful night.

Then, at about the thirty-minute mark, there’s a slightly terrifying clown statue, but that wasn’t enough to deter me as a child, so I keep chugging along.

The traumatizing scene doesn’t happen until halfway through, but it’s just as I remembered. I may not be able to remember where I put my phone or all of the character names on Game of Thrones, but I sure as hell can remember every detail of everything that has ever scared me.

It actually turns out to be a good thing that the eyeballs freaked me out as much as it did because, had it not, what happened next definitely would have. After his run in with Large Marge and her popping eyeballs, Pee-wee finds out that Large Marge “died ten years ago.” Fuck that noise. Not even as an adult am I okay with this turn of events.

And it doesn’t end there. That clown I mentioned just now was a fucking joke compared to the horrifying clown doctors that visit Pee-wee in a dream sequence. Only in the 80’s would it be okay to have both the clown from It and the clown from season four of American Horror Story show up in a kid’s movie.

There’s a really great scene where there’s a pet store on fire. Pee-wee rushes inside to save all the animals, but runs right past the snakes and makes a face at them. It was one of the only times that the humor was kind of subtle and not right in your face like a pie I’m sure Pee-wee would be apt to throw. It took me by surprise, and I actually laughed out loud despite being alone in the house, a super weird feeling.

Other than that the humor of Pee-wee’s Big Adventure was more something that only kids would find funny – like why is Pee-wee’s toothbrush giant? I just don’t get it. It’s not quite as stupid humor as kid’s movies today seem to rely on, though at times it toed that line.

So for that reason I suggest only watching Pee-wee’s Big Adventure if you have a kid who wants to watch it (and who isn’t a pussy like me). Also, I’m not a parent, so I don’t know if drinking heavily around your children is frowned upon, but Pee-wee’s Big Adventure would probably also make a good drinking game. Take a sip every time Pee-wee is annoying, and ten minutes in you’re already enjoying the movie as much as your kid is. You’re welcome.