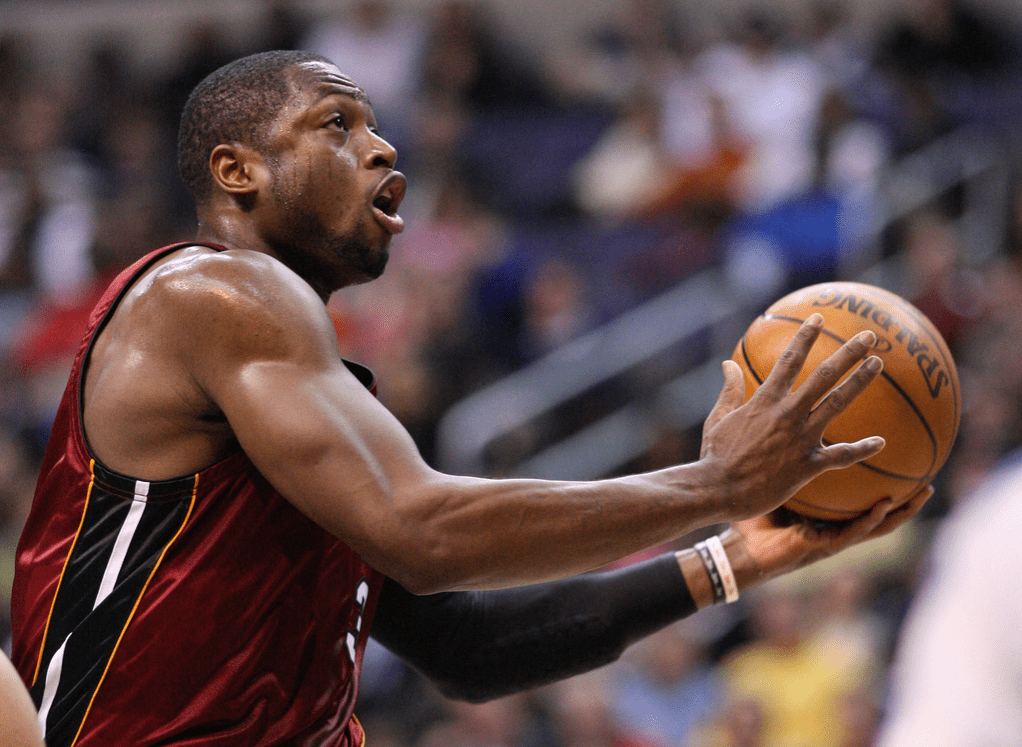 On October 29, 2003 I attended my first professional basketball game in Boston. The Celtics prevailed in a game that was never in doubt, but one thing stood out – the shooting guard for the visitors.

Today, Wade’s achievements relative to that class stand second only to LeBron.

He is the greatest player to ever don a Heat jersey.

He replaced Dan Marino as the most beloved athlete in South Florida.

The Miami Heat are a bigger draw than the Miami Dolphins and Hurricanes.

Dwyane Wade is to the Heat what Bill Russell and Larry Bird are to the Celtics.

The Heat proudly acknowledge all these statements as fact.

Last night, Dwyane Wade chose to be a Chicago Bull.

You’ll see many writers pontificating about Miami’s refusal to pay Wade, Wade’s chasing of every dollar, and all those tropes. If you want to read why Wade left, I recommend Dan LeBatard’s work in the Miami Herald, along with Ethan Skolnick. Ira Winderman in the Sun-Sentinel and the Palm Beach Post’s Jason Lieser are also well connected.

That’s not why you’re here.

You want to know why the Heat were right to hold steady to their offer of two years/$40 million. If anything – they would have OVERPAID Wade.

Again – Wade is the most consequential athlete in Heat history and rivals Dan Marino for South Florida athletic supremacy. I’ll say it again – Wade is overpaid at two years for $40 million.

Remember the hot water Jurgen Klinsmann found himself in two years ago when he asserted that Kobe Bryant’s last contact was insane and how it’s absurd to pay an athlete for what they did instead of what they will do? Bryant proved Klinsmann correct.

Regarding Wade, he’s played over 70 games once in the last five years. His skills are not what they were at the beginning of the Super Friends Era. He’s a valuable player, but at nearly 35 not a player to build around. Furthermore, Wade’s game doesn’t age well. In a league trending towards players who move the ball around and cut for open looks, Wade’s game is predicated on getting on getting to the rim.

What stood out in 2003 was how slippery Wade was going to the rim. Paul Pierce’s herky-jerky drives contrasted with Wade’s osmosis into the paint. The best part of Wade’s latest season was his teammates using towels to create a “bag of tricks” and Dwyane reaching in there after games. It’s fun watching heroes turn back the clock.

That’s just the problem. The broken, battered Heat leaned hard on Wade in the series against the Raptors, and Wade couldn’t deliver. Teammate injuries and Father Time placed too much of a burden on his back.

Meanwhile the Heat must decide – do we pay Wade for what he did or what he will do? In the end, their last offer was both. How many shooting guards in their mid-30’s command 2-year deals in excess of 50 million? Betting against aging gutted the Lakers. To blow cap space on Wade when next year’s free agent class and cap space make the Heat players in the market is short sighted though laudably loyal.

The counterargument some will make is Chris Bosh. LeBatard detailed how Bosh forced the Heat to max him out. When Bosh signed, he was 29 with no injury history. He spent the previous four years reinventing his game and became a defensive force of nature. Houston courted Bosh hard. No one was courting Wade and forcing Miami to ante up. Bosh’s blood clot issues muddle two half seasons of being the best player in a Heat uniform.

You can’t pay for past performance when future performance stands in stark contrast.
Ask yourself these questions:

Answering yes to any of those questions is a gamble. Wade gambled on himself this season and it worked. The next two seasons will not be as fruitful. That’s not a knock on Wade, it’s the reality of aging.

The paradox of losing an icon like Wade is the development it allows Justise Winslow, Josh Richardson, Goran Dragic and Hassan Whiteside. Bosh can do nearly anything on the court – he turned himself in a three-point shooter – therefore those four players are free to explore the studio space.

Winslow is especially interesting. He’s already one of the NBA’s better defenders and his work ethic is such that his offensive game will vastly improve next season. Increasing his touches only helps Miami as he continues to work the Heat’s shooting program. Adding his defense to the frontcourt of Whiteside and Bosh means Miami has an interior fortress few teams can match.

Dragic has suffered by having to share the ball with Wade. He’s a Ferrari that’s being driven like a Ford, and now with Wade gone the Slovenian can play at that breakneck speed he prefers. Open shots will be created for teammates, and though his defense isn’t a strength, he can afford to take more chances on the perimeter with what’s backing him up inside.

Then there’s Erik Spoelstra. Of course, he doesn’t want to lose Wade. Wade’s his only player who can score at will. The Heat will lack in this area. But here’s the thing – watching Miami this season, they’ve been aesthetically better with Wade on the bench. He stops the ball too much for the players in their system. In fits and spurts the Heat would run and defend, then Wade would come in and the action would slow.

Now, imagine an older, ball-dominant guard like Wade over the next two years. The Heat would be suppressing what they can do in order to get Wade his touches.

This is not a recipe for success. However, the key for Miami has been Bosh’s health and it will be. Either way allowing the young players space to develop is a net positive for the Heat.

Wade’s actions are indicative of wanting to stick it to Miami. He signed with a team that has a backcourt of Rajon Rondo and Jimmy Butler. How will Wade share the ball with Butler? What about Rondo’s personality? The Bulls seem stuck between deciding to rebuild or contend. Wade knows that at best, Chicago will be a five-seed while Miami can compete in the top four with Cleveland, Boston, and Toronto.

Wade’s public comments have always been tinged with denial about his decline. This acceptance of the Bulls offer indicates that Wade either sincerely believes he’s the same player he’s always been or he’s that fed up with Miami. Either way, at the end of the deal Chicago will not feel like they got a tremendous return based on production.
It won’t surprise me if Wade is the 6th man at the end of this season because where do you put Butler?

And this is where the most important question comes in – for Dwyane Wade, was leaving Miami worth it? Only he can answer that.

For Miami, the question of whether it was a good idea to call the bluff of the best player their franchise has ever known is already answered.

The Heat made the smart play.