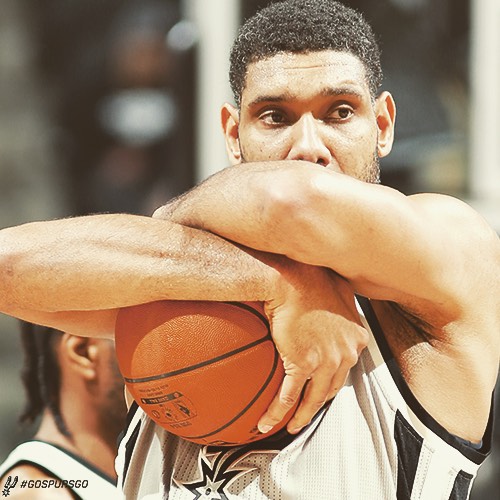 It’s kind of ironic … when I found out Tim Duncan had announced his retirement I was in the process of watching a San Antonio Spurs game from 2008 for a future writing project. Until I saw the link to the story on ESPN, I had completely forgotten that Duncan’s status for next season was even up in the air. That’s not to say that whether or not Duncan retired mattered to me; it did. It’s actually impacted me more than any other recent retirement in professional sports. The NBA as a league is better because of Tim Duncan’s presence, and as someone who cares deeply about said league, and has been meticulously studying the landscape of the NBA from the year 2000 until now for that aforementioned future writing project, I feel as though I’m qualified to say that Duncan is unequivocally one of the greatest basketball players ever, and somehow, arguably the most underrated.

When the Spurs drafted Tim Duncan 1st overall in the 1997 NBA Draft it changed the direction of the franchise and the NBA. With Duncan’s arrival, the balance of power in the NBA definitively shifted from East to West, and the Spurs toppled every great Western Conference team that they’ve crossed paths with over the course of these last two decades. The Spurs were able to outlast the Shaq/Kobe Lakers, the Jailblazers, those fun Sacramento Kings team, the seven seconds or less Phoenix Suns, the numerous variations of the Dallas Mavericks and the Durant/Westbrook led Oklahoma City Thunder. Tim Duncan oversaw it all. He’s seen the rise and fall of talented teams and potential dynasties in both the Western and Eastern Conference. In the end, the Spurs dynasty was the only one that really truly feels like a dynasty.

From 1997 until 2013 Tim Duncan was, give or take, one of the fifteen best players in the NBA. That’s a sixteen year window of being a legitimate stud on the basketball court. That’s a window that represents two thirds of my life. It’s a window that is comparable to the length of time it takes a person to work their way through elementary school, middle school, high school and college. Tim Duncan averaged 23 points and 11 rebounds per game in the Spurs first run to a title in 1999. He averaged 16 points and 9 rebounds per game on the way to fifth title … fifteen years later. We saw Duncan post a near quadruple double in the Finals close-out game against the Nets in 2003. In 2013, a 37-year-old Tim Duncan averaged 27 points and 15 boards in the final two games of the NBA Finals against the Miami Heat. He’s the only player to win an NBA championship in three different decades, and if the Spurs hung on in 2013 he’d be the only player to win a Finals MVP in three different decades.

At his peak, a peak that extended longer than the peak of nearly all of his peers and every legend that has ever stepped on the hardwood, Duncan was a brutally efficient offensive force; a double-double machine, a deceptively adept ball-handler and passer, and a guaranteed two points if you got him the ball in the post. Duncan was the fulcrum of the Spurs offense for a decade … a decade where the Spurs won four NBA championships.

On the defensive end Timmy was the disruptive anchor of a unit that was consistently among the top five in the league. His fifteen All-Defensive Team nods are the most in league history, and his skill-set at that end was multi-faceted … he protected the rim, hedged out on ball-handlers and played passing lanes. Even as Duncan got older and lost a step or two, he never missed rotations and his technique was flawless. By nearly any statistical measurement, or by the eye test, Duncan was undoubtedly one of the best defenders in NBA history.

You get the picture by now. For nearly two decades Tim Duncan was the closest thing to a constant in the constantly changing NBA. He was constantly professional, constantly fundamental and (in the eyes of many observers throughout the years) constantly boring. The Spurs were constantly title contenders, year in and year out for two decades, mostly because of Duncan’s constant, all-around brilliance, and his understated and again underrated selfless personality which seemingly rubbed off on everyone who crossed paths with him. He made stars out of Tony Parker and Manu Ginobili, and exponentially increased the worth of too many role players over the years to mention all of them by name.

That right there is the greatest example of Tim Duncan’s greatness. Since 1997 the San Antonio Spurs have been the best run and most successful franchise in professional sports. That’s no accident. The Spurs hit the jackpot in 1997, not only because Duncan was supremely skilled and remarkably durable, but also because he’s widely considered to be one of the greatest teammate in sports history. The Spurs collectively took on the personality of Tim Duncan (and Gregg Popovich, who will be forever tied to Duncan as soon as he calls it a career). The Spurs never cared about headlines or individual credit. They never sought to be praised or glorified. Neither did Duncan. They were just a bunch of dudes who loved each other, loved playing basketball with each other, and just so happened to be really good at playing basketball with each other, in large part because they thoroughly enjoyed doing so so damn much, and at every single point in his career Tim Duncan was just one of the guys.

As a franchise San Antonio never made a panic trade or panic signing or rocked the boat at all in a major way. They were constantly calm and constantly evolving, constantly one step ahead of the rest of the league. Think about this: their organizational core has remained largely the same for nearly fifteen years (I’m talking ownership, General Manager, Head Coach and the best players on the team), yet they’ve excelled in three distinctly different era’s of basketball. Not many teams make it through one era without hitting the reset button. The Spurs never had to because they had a transcendent athlete whose personality possibly meant more than his own on-court contributions. Tim Duncan was always even keel. Well, unless he was called for a foul.

For a variety of reasons I’m almost certain that there will never be another Tim Duncan, and frankly, I hope there isn’t another one. As much as I love the NBA, and as much as the NBA has benefit from having him around these last 19 years, Duncan deserves to remain a one of a kind, larger than life figure who most definitely would hate to hear anyone call him larger than life. He’s the kind of player that franchises should be praying to God that they have the opportunity to draft, and the kind of person that players should strive to be. There’s no greater accomplishment than that.