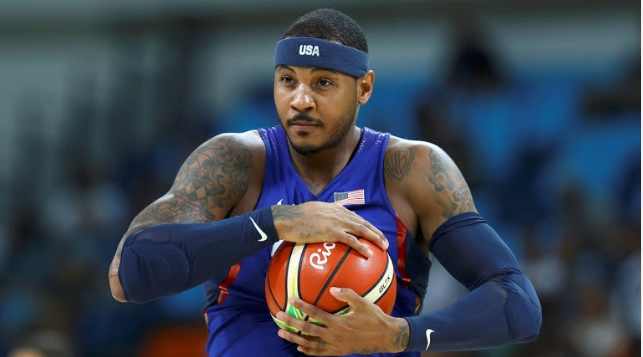 Carmelo Anthony has never gotten the praise he deserves. For 13 years Carmelo has lived up to the billing of a star player. He has been one of the best players, but has been treated with the same form of backhanded praise as guys like Tracy McGrady (he’s good you just can’t win a title with him).

Carmelo’s biggest problem is that he came into the league at the same time as LeBron James. LeBron makes even Michael Jordan uneasy about his once untouchable GOAT status. Everything Carmelo did is inevitably compared to LeBron (i.e. the asinine reasoning that LeBron won a title with Melo’s team). But lost in the gleam of LeBron’s accomplishments has been Carmelo’s Hall of Fame career.

I can feel the eyebrows rising.  Hear me out. First off Carmelo’s numbers are already worthy of enshrinement. Judging from the committee’s past (i.e. Bernard King, Mitch Richmond, amongst others who Carmelo has equal to or better resume’s than) they do not treat Springfield like Canton or Cooperstown. The Basketball Hall Of Fame wants its players to get in.

There are many versions of Carmelo. There is Sleepy Melo, Bully Melo, and of course, Olympic Melo. Olympic Melo is the greatest version of Carmelo Anthony. It’s his Cactus Jack. You cannot talk about his career without bringing up Olympic Melo. He rights all the perceived wrongs in Carmelo’s game. He is the leader he’s always accused of not being with the Knicks. He makes the extra pass instead of letting the ball stick.

What makes Olympic Melo so important is more than winning gold medals. Sorry DeAndre Jordan no one is buying that idiotic assertion that an Olympic gold medal is anywhere near as great an achievement as an NBA title. But a gold medal should still hold more prestige than it does.  Playing for your country should carry more prestige than it does. For four years Carmelo has done all that and more for Team USA. And for years he has been clowned for caring more about the Olympics than the NBA.

His accomplishments alone are compelling. In his four Olympic games he has four medals (one bronze and three gold). He has accumulated the most points, rebounds, and played the most games for Team USA. He joined Team USA when the program was at its lowest and left it at its highest.

Yeah people forget that twelve years ago Team USA was not untouchable. The rest of the world caught up to us at one point. Carmelo watched that firsthand as Team USA hit rock bottom in 2004 taking home bronze. We don’t take home bronze. Its gold or bust around here.

When he came back in 2008 it was for revenge and for the right medal.  He was not the main guy on the Redeem Team, but he was definitely a big piece of the puzzle. He was huge in avenging the 2004 loss to Argentina by pouring in 21 points during their rematch in the semifinal. His job was to complement LeBron and Kobe Bryant and he did just that as the Redeem Team completed their mission.

When he returned in 2012 he moved to the front of the pack. The London games prefixed Carmelo’s best season. He was not the complement he was now a pillar along with his Entourage (LeBron, Dwyane Wade, and Chris Paul) for Team USA. That 2012 run was the most dominant of Melo’s Olympic tenure and he was a big reason for that pouring in threes like he was playing NBA Street.

This year was his swan song. With the nucleus of those dominant 2008 and 2012 teams mostly gone Carmelo was the only who came back. Kevin Durant, Kyrie Irving, and Paul George were certainly better in Rio, but Carmelo wasn’t there to be that. He was there to lead. Team USA Coach Mike Krzyzewski had this to say about what Carmelo means to the program:

What has it meant to have four-time Olympian Carmelo Anthony be such an integral part of this Olympic team? We ask the guys for a commitment and selfless service, and even though they are committed we try to show them at even a deeper level and they have to learn about selfless service. We use the military in that regard. But Carmelo is a perfect example of commitment for the Olympics.

Selfless. When has Carmelo ever been praised as selfless? Not much if ever. That’s what makes Olympic Melo so great. He completes the story for Carmelo. He shows to people that clearly don’t watch enough of him during the NBA season what kind of player he truly is. His postgame interview after winning his third gold medal showed its more than the game to him. Carmelo Anthony is more than one of the greatest scorers of our generation. He is one of the best players of our generation. And he is the GOAT of Team USA.