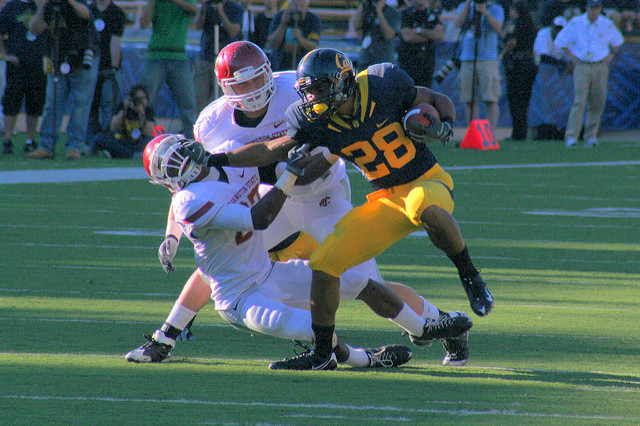 There are so many college-bound student-athletes who will be sidelined by the NCAA’s new eligibility regulations (which took effect at the start of August), which makes the latest college football lines a little difficult to read. The NCAA now expects prospective student-athletes to deliver a minimum 2.3 core GPA. Along with a 900 SAT score or a 75 ACT sum score, the NCAA’s regulations will sideline a number of incoming college football players and Division I athletes for whom these regulation changes were nothing short of shocking.

Anyone whose core GPA falls between the 2.0 and 2.299 mark can look forward to an academic redshirt classification. This will prevent them from competing during freshman year; though, all isn’t doom and gloom because such recruits can still receive a scholarship and participate in practice. The number of students who won’t be able to play this season because of their less than sufficient GPA is astounding, or so UNLV Director of Student-Athlete Academic Services David Wedley says.

The jump between 2.0 and 2.3 is quite large, large enough to impact a significant number of students this year. And even the redshirt classification might be no consolation for aspiring athletes that were looking forward to pursuing their sporting goals in the colleges of their choice. The fact that so many colleges have far more stringent academic requirements than the NCAA is especially alarming.

Because of the new, tougher NCAA rules, coaches are going to take a harder stance against students that do not measure up academically. Gone are the days when coaches could afford to give scholarships to struggling athletes who they could then assist through their academic trials, putting hope in the fact that they will eventually achieve the desired educational requirements at the end of it all. Colleges across the country now only want athletes who have a clear eye on academics. They want kids who desire degrees as much as they do playing time, and the new requirements might not be the worst way to sieve through recruits.

After all, the manner in which a student attacks their academics will say a lot about their discipline as athletes. The environment is such that the NCAA wants to foster an arena where players realize that their athletic opportunities are a means through which they can meet their educational objectives, this as opposed to an alternative to the rigors of education. There will be a lot of disappointed Division I recruits this year. Colleges will not want to waste time on kids who look like they might be unable to make the cut academically. Students will be expected to complete 10 of their 16 core courses before senior year, this on top of meeting the 2.3 core GPA requirement.

Clearly, aspiring student athletes must begin scrutinizing their choices in school carefully to determine whether they have what it takes to pursue their sporting interests. The NCAA is determined to prioritize academics over all else. It is no longer enough for kids to succeed on the field and simply hope that the colleges of their choice will overlook their academic failings.