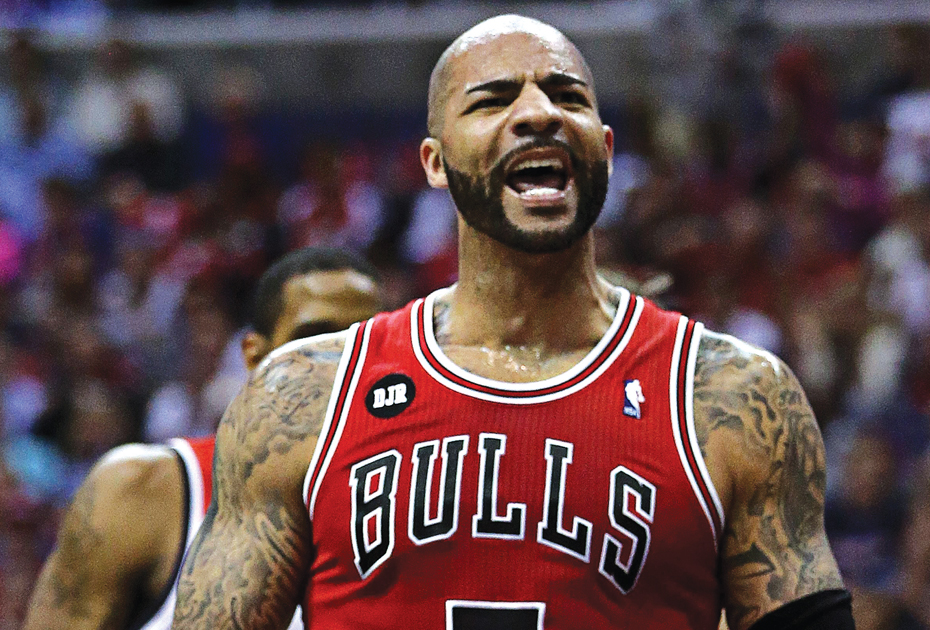 Image Courtesy of The Mash

Figuring out Carlos Boozer‘s place on this Top 50 list reminded me of the “Vicky Mendoza Diagonal” bit from How I Met Your Mother.

Similar to the conundrum that never-seen Vicky Mendoza put Barney Stinson in, the evaluation of Carlos Boozer’s resume gave me a major head-ache. There are so many pros and cons to look at that it made it nearly impossible to settle on a spot that best suited him. He jumped back and forth between on the list and off the list for months. Luckily, I feel pretty good about 47th, but let’s see if you guys would agree with me after I lay everything out for you.

POSITIVE: Boozer maintained an impressive seven-year statistical peak. The list of guys who averaged 19 points and 10 boards per game over the course of any seven season stretch in the ’00’s is probably smaller than you’d imagine (In case you were wondering, it’s a group that’s eight-deep: Boozer, Pau Gasol, Kevin Garnett, Dwight Howard, Shaquille O’Neal, Shawn Marion, Tim Duncan and Chris Webber … that’s it).

NEGATIVE: In that seven year peak Boozer missed 161 out of a possible 574 games. That’s 28 percent off all possible games in that span. That’s, uh, not great.

POSITIVE: Boozer was either the best or second best player on two conference finalists, and two other teams that made the 2nd Round of the Playoffs. On top of that, Boozer’s career postseason numbers are actually slightly more impressive than his regular season numbers.

NEGATIVE: Boozer was blessed with All-NBA caliber point guards, terrific supporting casts and phenomenal coaches in both Utah and Chicago. That doesn’t actively take away from anything Boozer accomplished, but you can’t just ignore situational factors like that. It had something to do with why Boozer was so effective for the better part of a decade.

POSITIVE: In 2008 Carlos Boozer was selected to play for the United States Men’s National Team in the Summer Olympics in Beijing.

NEGATIVE: Along with Michael Redd and Tayshaun Prince, Boozer filled out the end of the bench on a squad that could have gone toe to toe with the Dream Team from a “Wow, look at all of those Hall of Famers” perspective if they could have found a way to bring in Kevin Garnett, Paul Pierce and Ray Allen for those last threes spots. Can you imagine that team? LeBron, Kobe, Wade, Carmelo, Paul, D-Will, Kidd, Bosh, Howard, KG, Pierce and Allen … Jesus. Sorry to the old timers out there, but that hypothetical Olympic team upends the Dream Team.

NEGATIVE: As a older fella in Chicago he had awful head hair. Seriously, not enough was made of this. This should have been the lead on every talking heads ESPN show for at least two weeks. They’ve talked about dumber shit than that.

POSITIVE: In his peak Boozer always played hard, with an edge, and he was legitimately unafraid of trying to finish over or through anyone at the rim. And you best believe if Carlos Boozer dunked over you or finished through contact and got an ‘And 1’ he was screaming at you and/or staring you down afterward. All column gimmicks aside, Boozer’s game is actually underrated. He was a match-up nightmare for a few years there where he was just too strong on the block for opposing Power Forwards, but far too quick for Center’s to guard him if he got the ball on the wing or at the elbow. Utah’s offense was built on the Williams/Boozer pick and roll, and Boozer being able to beat defenders on the block and at the elbow, and they were pretty damn good for a four season stretch. 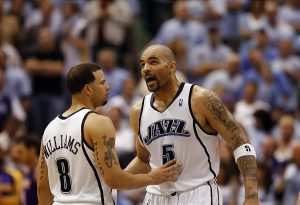 NEGATIVE: Back in 2004 Boozer gave his word to then Cavaliers owner Gordon Gund that he would re-sign with the team if the Cavs released him from his contract. Not only did Boozer leave for Utah, and screw over an elderly blind man in the process (that’s bad karma), he lost out on the chance to play with LeBron James for the next six seasons. I suppose it all turned out well for Boozer. Little did he know in 2004, but he’d eventually be paired with Deron Williams and together they would form the homeless man’s version of Malone and Stockton. But man, what compels a guy to not want to play with Magic Johnson 2.0? Did Boozer’s ego get in the way? Was it all about the money? Is Cleveland really that much worse than Salt Lake City?

Like I said, 47th looks good, but man, it feels like, as was the case with quite a few guys in the 40’s, Boozer should have been higher. I don’t say that just because he could have been the best teammate LeBron had in his first Cleveland tenure if he didn’t decide to blindside Gordon Gund (no pun intended). Boozer was a quality banger and a viable crunch time scoring option for those Jazz teams that were annually in the Playoffs. Yet, for as strong and loud and physical as Boozer was he just couldn’t stay healthy. A myriad of injuries nagged him throughout his career and cut it shorter than it should have been. Did you know Carlos Boozer is only 34 years old? Did you know just three seasons ago Boozer averaged 16 points and 10 rebounds a game for a team that made the 2nd Round of the Playoffs? I don’t understand how he dropped off so quickly, but then again, I totally get it. He’s on the Vickie Mendoza diagonal, so you never know what to expect.