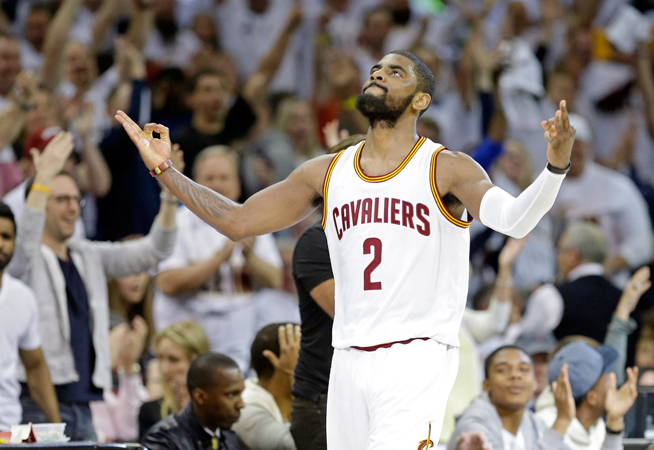 It goes without saying, but getting older is a pretty interesting life process. You sleep wrong overnight and you wake up the next morning feeling like Rocky Balboa peppered you with body shots all throughout your slumber. You watch as younger relatives grow multiple inches taller each time you see them, and there is nothing you can do to ensure that you stay taller than this little person that is sprouting into a giant (a shout out to my “little cousins” Luca and Nico). And as a sports fan, you begin cheering for players that are younger than you, and that right there is an extremely sobering experience.

I am one month older than Kyrie Irving, point guard of my favorite NBA team, the reigning world champions, the Cleveland Cavaliers. Kyrie’s been in the NBA for five seasons, and he’s already created a resume that is worthy of being named one of the Top 50 players of the 2000’s. I haven’t accomplished anything remotely in that stratosphere because I’m a normal human being who isn’t abnormally impressive at really anything. Here is a rough timeline of what life has been like for Kyrie in the NBA, and also an account of what I’ve been up to these last five years, which is remarkably less remarkable.

After suiting up in only eight games for the Duke Blue Devils, Kyrie Irving was drafted 1st overall by the Cleveland Cavaliers in the 2011 NBA Draft. Not only did Kyrie have to deal with the expectations of being the number one player chosen, he was unfairly left an empty throne to call his own since LeBron James took his talents to South Beach the summer prior. Was Kyrie ever going to be able to fill the shoes of LeBron James? No. But did he come in and make as much of an impact as a 19 year old rookie point guard possibly could have with a shitty crop of teammates around him? Yes he did.

Meanwhile, when I was 19 years old I successfully finished binge-watching both How I Met Your Mother AND ER. In news that is more than likely related, there weren’t a whole lot of girls in the picture my freshman year of college.

As a member of the USA Basketball Select Team, Kyrie Irving challenged Kobe Bryant to a game of one-on-one with $50,000 on the line. Kyrie wouldn’t have won this game had it gone down, because at this point Kobe still had two functioning Achilles tendons and played defense, but this challenge definitely went a long way in Kyrie’s attempt to gain Kobe’s appreciation, because a 20 year old Kobe would have done the same thing exact thing to MJ back in 1998. The Cavs didn’t have much success during Kyrie’s rookie year (or his second or third seasons for that matter), but 2012 was really the first time Kyrie Irving made a splash on the national scene. He torched Team USA during those scrimmages.

My crowning achievement as a 20 year old: drunkenly making my way onto the roof of a hotel in Miami Beach with my buddies Collin and Phil and attempting (and failing) to give the same speech, word for word, that Alan gave in The Hangover mainly because I was far more intoxicated than Alan was when he gave the same speech.

I lied … this is when Kyrie actually burst onto the national scene. In the 2014 All-Star Game Kyrie exploded for 31 points and 14 assists, and led the Eastern Conference to a win over the West. I know what you’re thinking; the All-Star game is a joke and it’s only getting worse year after year. However, the All-Star game can occasionally be a useful tool for highlighting who mattered in a respective season depending on how close the game is in the 4th quarter. If things are tight in the 4th quarter the guys who actually matter, the best guys, are going to be getting the 4th quarter minutes. The defense isn’t quite Playoff level, but for the last five minutes the defensive effort (usually) at least resembles a regular season game.

In 2014 things got tight down the stretch, and it was Kyrie Irving who was running the show for the East squad. This was the final season of LeBron James’ Heat tenure. It was Paul George‘s breakout season. It was Carmelo Anthony‘s last great Knicks year. In other words, there were some gamers on that East team. And yet, Kyrie was the guy who was making shit happen for the East. Now sure, the All-Star Game is a point guards paradise, especially for someone like Kyrie, whose specialty is taking dudes off the dribble and hitting lightly contested jumpers. Still, it’s pretty telling that a 21 year old who played for a crappy Cavs team thrived in a spot where the lights were bright and he was surrounded by the best basketball players in the world. He belonged, regardless of what Cleveland’s win/loss record looked like.

I didn’t play in any All-Star Games as a 21 year old, but this was the age when I peaked as a basketball player. This is unfortunate because I stopped playing truly meaningful basketball games when I was 18 years old. 🙁

In a nationally televised mid-season game against the San Antonio Spurs in San Antonio, Kyrie Irving poured in 57 points in an OT victory. It was, by any measure, one of the best regular season basketball games of the century, an exhibition of what made Kyrie Irving so breathtaking to watch (the difficult shot making, the clever handles, the clutch plays, etc.), and a complete violation of a very good Spurs defense. Kyrie violated them. There is no other way to put it.

During Game 1 of the 2015 NBA Finals, Kyrie Irving fractured his left kneecap and had to watch on the sidelines as his Cleveland Cavaliers lost to the Golden State Warriors. Let’s fast forward to …

The 2016 NBA Finals, a rematch between the Cleveland Cavaliers and Golden State Warriors. The ins and outs of the series have been covered by far smarter people than me and everyone knows the story at this point: the Cavs fell behind 3-1, Draymond Green was suspended for Game 5 in Golden State, Cleveland won on the road, then held home court in Game 6, then upset the Warriors in Game 7, becoming the first time ever to overcome a 3-1 deficit in the Finals, and LeBron James solidified his place among the NBA’s greatest players with three of the most memorable Finals performances ever in three must win games.

Here’s what will (likely, and unfortunately) be forgotten about historically: Kyrie Irving was sensational in the final five games of the series. He was the second best player in an NBA Finals that included Stephen Curry, Klay Thompson, Draymond Green, Andre Iguodala, the artist formerly known as Kevin Love, and the sixty-four million dollar man, Timofey Mozgov. His 41 point Game 5 was historically great, and if it weren’t for LeBron’s superhuman block on Iguodala in the closing minutes of the game, we’d remember his go-ahead three pointer with under a minute left as one of the top five greatest plays in the history of the NBA Finals. 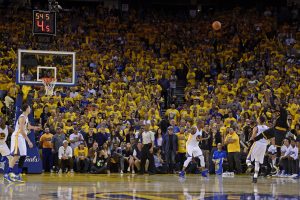 Amazingly, it already feels like Kyrie’s dagger has already become an afterthought, even though it’s one of the most clutch plays in sports history, and definitely the biggest shot anyone under the age of 25 has ever made in a basketball game. LeBron fulfilled his basketball destiny coming back to Cleveland and ending the city’s five decade championship drought. Even though he’s only 24 years old, it already feels like Kyrie Irving is living out his basketball destiny.

Kyrie doesn’t have every tool necessary to be the best player on a championship team, but he’s got enough to climb this list at an accelerated rate so long as he’s a teammate of LeBron James. LeBron has had a way of masking some of the weaknesses of his best teammates. His effect on Kyrie is no different. But in Kyrie, LeBron has a teammate that can hide some of his weaknesses, or at the very least make life much easier for him than he’s been accustomed.

It’s not a stretch to say that Kyrie Irving, much like his budding rival Stephen Curry, is one of the most offensively skilled basketball players to ever step on the hardwood. Kyrie’s handles have already become legendary. If you were to compare Kyrie’s ball-handling arsenal to a car wash, he’s the $10 package; the one with all of the different colored waxes and soaps that takes like 15 minutes to finish. He’s armed with every savvy ball-handling trick in the book; the expert change of direction and change of pace (the single biggest part of being a great ball-handler), all kinds of spins and half spins and quarter spins, equally good with both hands and absolutely superb in tight spaces. It’s all there. Combine that with his competency as a scorer and his willingness to score, it’s no wonder Kyrie looks like a fucking magician out there from time to time.

Again, the best part about this is he’s only 24 years old. Of any player already in the top fifty, Kyrie has more room to improve his position on the list than anyone else (and again, that’s factoring in the situation he’s in as well … had LeBron never come home it’s safe to say that Kyrie would not be on this list). And I’ll gladly remain a perfectly ordinary, albeit far more emotionally invested than I should be observer throughout his climb.