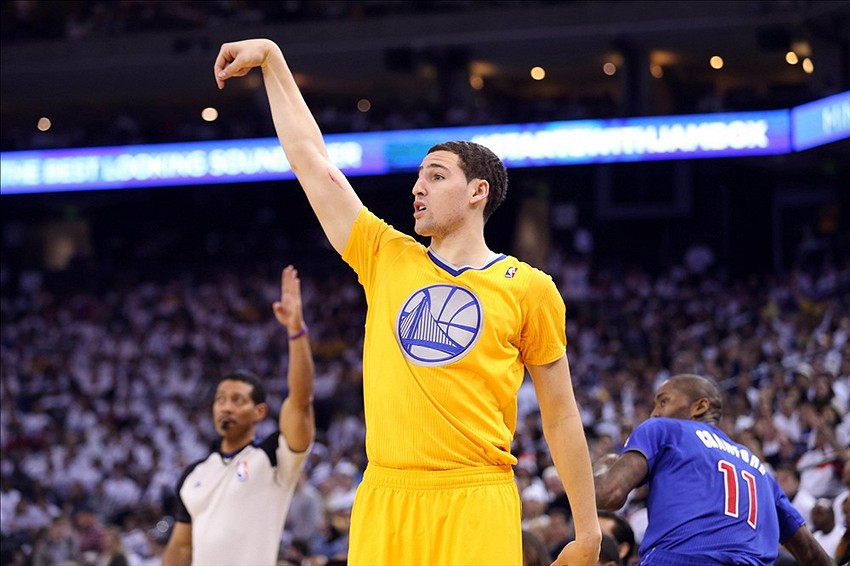 Unlike many others, my realization of just exactly how good Klay Thompson could be did not come when he erupted for 37 points in a quarter against the Sacramento Kings during the 2014-15 regular season.

It came a reasonable amount of time after that.

A quick, yet wholly-related aside: I have a difficult time believing that Klay’s 37-point quarter won’t forever remain one of the most baffling sports feats that I will ever watch. Please note, I used the word “baffling” because I’m convinced it’s the most accurate description for what Klay did to the Kings. Others would use the descriptions like “impressive” or “dominant” I chose baffling, because even in the moment I was more confused than anything else. I was in my bedroom, all alone, watching the game on NBA League Pass, and I never once thought “Wow this is so impressive! Klay Thompson is dominating the Kings!” I sat there in my bedroom repeatedly muttering to myself, “What the fuck is going on?” And when it was over, after Klay shot 13 for 13 from the field, including nine three-pointers, still baffled, I thought to myself, “What the fuck just happened?” Nobody on this list ever quite made me feel like that. No great scorer in my lifetime ever tapped into that earth-scorching, mind-altering level of being un-fucking-conscious from the field. And yes, that performance deserved all three f-bombs I dropped in that paragraph.

So yes, it took another full season after he went bonkers for me to finally figure out how good Klay Thompson is, and how good he could end up being. This is because, as I said before, Klay’s 37 point explosion was baffling more than anything else. Did it highlight Klay’s otherworldly ability to shoot a basketball? Without question. Was it an indicator that similar incidents could occur down the road (like when he burned down Chesapeake Energy Arena in Game 6 of the ’16 Western Conference Finals)? It absolutely was. Did it give some sort of validity to Mark Jackson‘s claim that Klay and Steph Curry are the best shooting backcourt ever? Yes, and when you couple that with fact that Curry and Klay now own six of the 12 best three-point shooting seasons in NBA history, it really doesn’t seem that crazy at all that Jackson would say that.

But what that game, and that quarter, and those thirteen made shots (which seemingly increased in absurdity) didn’t solidify is what a foundational piece Klay Thompson would be for the Warriors moving forward, nor did it show the kind of well-rounded player that Klay, in a reasonably short amount of time, has developed into. It took time for me to fully realize and appreciate that.

Of course, that kind of stuff will get lost in the Vine/YouTube-centric NBA. There are many more views to be had on videos of Klay turning a real-life NBA game into an NBA Jam exhibition than ones that examine his improvement as a defender. Casual fans would much rather read about all of the long-distance shooting records that the Splash Brothers will set than the intricacies of what makes each of them so effective to begin with.

Just three short years ago Klay Thompson, a newly appointed Splash Brother, didn’t even finish as one of the top thirty most efficient three-point shooters in the NBA. He certainly didn’t project as a shoo-in for the All-Star or All-NBA Teams. Over these last three years we’ve seen improvements from only a handful of players than have been as grand as Klay’s has; any conversation about the best two-way player in the league has to include Klay Thompson. His metamorphosis from three-and-D wing to a top ten player in the league hasn’t been quite as startling as Steph Curry’s ascension to the top tier of NBA talent, but it’s been equally remarkable in its own right.

The areas of improvement are pretty straightforward … first, as previously mentioned, Klay turned himself into an all-time great shooter in an astonishingly quick amount of time. His release has always been quicker than a hiccup and his form is right out of a textbook. All around the arc he’s a better shooter now than he was three years ago, and though he’s certainly not on the level of Steph Curry, Klay’s become much more adept at creating, and converting, shots off the dribble.

That brings us to the second point; Klay used the threat of being one of the most frightening long-distance shooters in NBA history and has created a nice, and underrated, off the dribble game for himself that keeps defenders off-balance. Don’t get it twisted; Klay’s bread is buttered on catch and shoot three-pointers, but not at least there are different means of scoring. He’s increasingly unafraid (and effective) going towards the basket and finishing over (or through) defenders.

Though he’s not the sort of athlete that Kobe, Wade or Jordan were in their primes, Klay is deceptively athletic and armed with enough guile and a quick enough first step that he’s a problem when he puts the ball on the floor. He possesses good enough size, and enough polish as a post scorer, that he can punish smaller defenders with his back to the basket if the match-up calls for it.

The third point (and the point that I feel ultimately prevented the Warriors from including Klay Thompson in a trade for Kevin Love back in the Summer of 2014): Klay’s upside as a defender is only in the early stages of being understood nationally. If you’ve really closely followed the Warriors for the last half of a decade or so it’s been one of the ten biggest developments that has sped up the Dubs growth process. Klay is routinely given the marquee defensive assignment, guarding scoring point guards (a lifesaver for Steph Curry) and elite wings with equal effectiveness. He never has to be hid and he’s rarely going to get torched. He’s technically sound, smart and competitive as hell. Really, those are the only qualifications for being an above average defensive player. Klay has surpassed that distinction by a mile.

Again, none of these things were totally clear when Klay owned that 3rd quarter back in January 2015. Klay Thompson was just the storyline for the evening; it was one of the many amazing nights en route to the Warriors first NBA Title in 40 years. It wasn’t so much Klay’s coming out party as much as it was the Warriors putting the league on notice that crazy shit like this was liable to happen on any given night. Sure, in the eyes of many that game probably went a long way in leveling the playing field a bit with Klay and Steph, but in reality it was the work that he had put in, and would continue to put in, in those different areas that was far more responsible for his leap, and the Warriors leap. Frankly, that evolution has been almost as baffling as that 37 point outburst was. Almost. 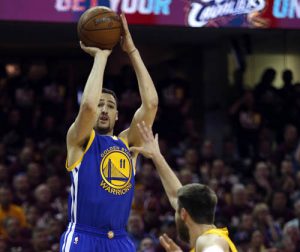 During the negotiations between the Warriors and Timberwolves back in the Summer of 2014 I wrote about how Golden State was crazy not to include Klay Thompson in a trade for Kevin Love. I was convinced that it was a trade the Warriors had to make if they wanted to go from fringe . Needless to say, I did not see this leap coming. Sometimes you’re just off with this kind of stuff. I was off. I thought Klay Thompson’s ceiling was something like Joe Johnson‘s (still to come on the list) … it turns out it is higher than that.

Moving forward I won’t really be baffled by anything. The acquisition of Kevin Durant obviously changes the dynamic in the Bay Area, but Klay Thompson will be just fine. He settled nicely into the role of the lesser popular Splash Brother, and by all accounts he’s fine with doing his thing and kicking everyone’s ass in the process. He picks his spots, drills jumpers, plays awesome defense and carries the Warriors offense for stretches at a time when he’s got the hot hand. None of that will change. If he gets two or three less shots per game it won’t be the end of the world for him or the Warriors. Fifteen years from now Klay will be significantly higher on this list than he is now. He might never have another game like he did against the Kings, but we’ll remember him for a lot more than just that by then.