Kawhi Leonard doesn’t have the largest body of work to go on. I concede that I am stating the obvious, since you can look at his body of work just inches higher on this very screen. That makes the task of finding the right place for him (or finding a place at all) that much more difficult since he’s opposition to guys who played in the NBA far longer than he has. Remember, this list doesn’t look at what a player could become; it’s looking at what a player has been in the 21st Century.

So despite a smaller sample size to look at, and a less remarkable body of work than some guys who have benefit from playing three times as long as Leonard has, Kawhi still finds himself comfortably in the Top 50. Why, you ask? Well, for starters, he’s on the short list of the best defensive players I’ve ever seen step on a basketball floor. There’s not a sliver of hyperbole in that prior statement. He’s right at the very tippy top, the highest percentile of defenders in league history.

Here’s the thing about Kawhi Leonard, defender extraordinaire, that’s so impressive: There hasn’t been a player who possesses a higher defensive ceiling each night than Leonard. That separates him from everyone else in the 21st Century. LeBron James had all of the physical tools it would take to be just as good as Leonard, and in the moments when he’s really dialed in he can get there. Ron Artest was physical and chippy and he could take your best player out of the game in a mental way just as effectively as he could with his on-ball defensive technique. Chris Paul was technically sound, yet just as handsy and physical with the guys he defended as Artest was, and despite being over half a foot shorter than Artest, he was just as intimidating. And of course there have been guys like Ben Wallace, Dwight Howard, Dikembe Mutombo, etc. who can make scoring in the paint or remotely near the basket an impossibility.

And then there is Kawhi Leonard, a different species of defensive threat. Kawhi has a habit of making great players look average, and average players look like the guys on the Lacrosse team who would embarrass themselves trying to play pick-up basketball in college. Here are my six favorite things about the way Kawhi Leonard plays defense, in no particular order:

(Note: There is no way any other guy on this list has been talented enough, diverse enough, or interesting enough as a defensive presence to run through this sort of exercise)

1: Kawhi Leonard is going to make your life a hellish nightmare if you try to dribble near him. It doesn’t matter who you are or how capable you think you are of handling the ball in traffic, you don’t do that kind of shit around Kawhi Leonard. If someone told me I had six months to prepare for a drill in which I had to dribble from one end of a basketball court to the other end with Kawhi Leonard guarding me, and if I didn’t make it without him stealing the ball then I would die, I wouldn’t even bother trying to improve my handle. I’d just spend the next six months traveling the world and seeing shit before Kawhi Leonard ended my life.

2: I love how quickly Kawhi rotates on defense, and even more than that, how insane his reaction time is when he’s closing out on a shooter on the perimeter. He comes in completely under control, he stays down on shot fakes, he’s already in a defensive stance … It’s a model of perfection for how a basketball player is supposed to close out on a shooter.

3: If you’re the most elite of all of the elite offensive players and you manage to get ahead of Kawhi you aren’t safe yet. The time it takes him to recover and regain prime defensive positioning if his assignment beats him off the dribble is quicker than the time it takes him to dart out to shooters on the perimeter. And those long arms and huge mitts are going to make it a real hassle to get a shot off. Kevin Durant learned this the hard way.

4: Kawhi rarely, if ever gambles defensively. He’s not recklessly reaching in or darting into passing lanes too late or too early. He’s not straying away from his assignment in an attempt to rack up stats. Everything is meticulous and perfect from a technique standpoint. Despite this, he became the third forward in NBA history to lead the league in steals last season.

5: He’s always playing hard AND smart. Nobody always does both of these things. There is no wasted movement, just like there’s no wasted possessions. He’s always locked in. He’s a goddamn robot.

6: Remember how we talked about how it was a lost cause of you are handling the ball and trying to shake Kawhi? Well, you probably aren’t going to have much better luck off the ball. You can’t lose him if you’re trying to run him through a maze of screens; he’s never going away. He’s long and tall and athletic and the way he maneuvers around screen-setters is more graceful than anything that I’ve ever done in my life. 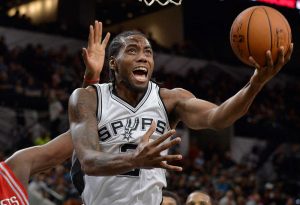 There’s no doubt that Kawhi has the skill-set to qualify for this list, especially since he’s been a legitimate offensive weapon these last two seasons. He’s gradually coming into his own as a iso-scorer off the dribble, but where Kawhi is really effective in the mid and low post. He’s added a reliable right-handed baby-hook near the basket that he has no issues getting off over smaller defenders, and his mid-post jumper from the wings and foul-line is as automatic as any go-to shot for any player in the league right now. What Kawhi lacks more than anything else right now is the night to night confidence that he can be every bit as impactful offensively as he is defensively. When and if that comes the Spurs will truly have the heir apparent to the throne that Tim Duncan limped away from just a few months ago.

The only question regarding Kawhi’s placement on the Top 50 list comes if you decide to challenge his accomplishments. How could a five-year guy who was nothing more than a role player for two of those five years surpass guys who have played hundreds more games and scored thousands more points? Here’s what I know: only nine guys in league history have won multiple Defensive Player of the Year Awards … Kawhi Leonard is one of them. Only five wings have won Defensive Player of the Year at all … Kawhi Leonard is one of them. Only three players have won a Defensive Player of the Year AND been named NBA Finals MVP … Kawhi Leonard (along with Michael Jordan and Hakeem Olajuwon) is one of them. He’s the youngest Finals MVP in league history and his reputation thus far is pristine.

Yeah, he’s only got five years under his belt, but they’ve been more significant and captivating and impactful than the entire career of most NBA players.