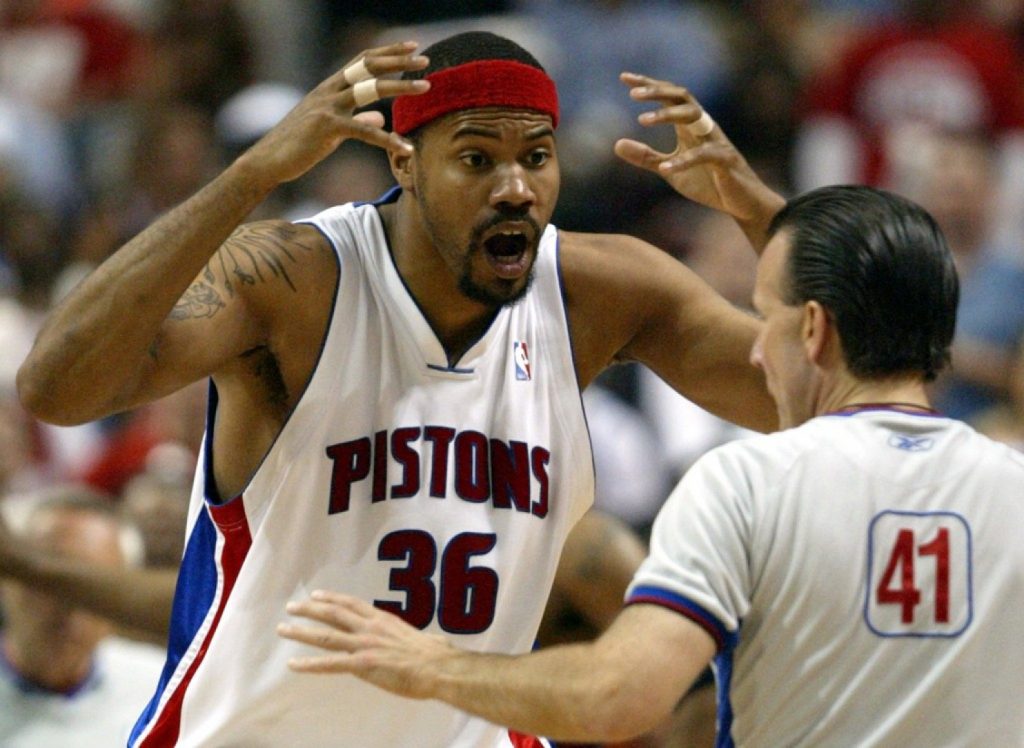 It’s rare when the entire story of a players career can be told while looking at a 45 game blip, but that’s the case today with Rasheed Wallace. I could tell you all about Sheed’s time with the Portland Trail Blazers (A.K.A. the Jail Blazers) and how they came oh-so-close to making the NBA Finals in 2000, or about the one game he played with the Atlanta Hawks, or his forgettable tenures with Boston and New York, or every single relevant moment he had with the Detroit Pistons between 2004 and 2009. But why would I do that when every bit of the Rasheed Wallace experience was captured in a four month stretch in 2004.

On February 19th, 2004 the Pistons traded away three rotation players and two 1st Round picks in order to get Wallace, an ultra-talented big man who came with a well-known spotty reputation and a long-list of NBA Officials that he had already quarreled with in hand. The Pistons sacrificed depth, their future, and potentially even team stability to take a shot on Sheed. They hoped to wedge their championship window open a bit more in the short-term than it already was. We didn’t know it at the time, but the Pistons absolutely needed Sheed. They wouldn’t have won the 2004 Championship without him. They wouldn’t have went to the 2005 NBA Finals without him. He was their missing puzzle piece in more ways than one.

Detroit was vaguely in contention and fatally flawed, and Sheed was the cure-all to every one of the Pistons’ problems. They lacked consistent scoring in the post … Rasheed could get you a back-to-the-basket bucket. They needed to be able to stretch the floor so there was more space to work offensively … Rasheed was that floor spacer (Sheed is one of five players 6’10” or taller with at least 1,000 three pointers in their career). The biggest thing Detroit needed was a player with a very particular sort of mental toughness and swagger that was lacking in Ben Wallace, Chauncey Billups, Rip Hamilton and Tayshaun Prince … Rasheed oozed this sort of self-confidence like Razor Ramon oozed machismo. 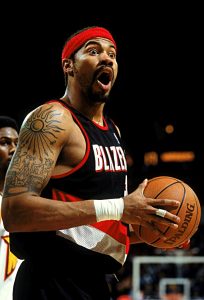 It was necessary that the Pistons acquire that specific trait in order to take the next step. They needed a guy to say outlandish shit and back it up. They needed someone who was going to push the envelope. They needed someone who wasn’t going to back down or shy away from a big moment. They needed a guy who was going to speak candidly and make guarantees and do all the stuff that a lot of dudes are too afraid or too self-aware to do. Rasheed never cared. He was never afraid to be brash or outspoken or controversial because it was never an act or an obligation. He was just being himself. In some situations Rasheed’s personality would have never worked. He would have rocked the boat too much and rubbed the coaching staff, his teammates and his team’s fans the wrong way. In Detroit he was instantly revered.

The Pistons went 20-5 in the regular season after their trade for Rasheed was finalized, and they entered the postseason one of the Eastern Conference favorites along with Indiana and New Jersey. Detroit faced a 3-2 deficit against New Jersey in Round 2, but won the final two games of the series to advance to the Eastern Conference Finals. Indiana defeated Detroit in Game 1 of the Conference Finals, and after the game Rasheed Wallace so boldly said this:

Naturally, the Indiana fans didn’t take to kindly to this sort of proclamation. They gave it to Rasheed all night long in Game 2. They booed him whenever he touched the ball. They wildly applauded whenever he missed a shot (he was 4 for 19 in Game 2, so there were plenty of opportunities to go ape shit). Rasheed kept coming. He was as comfortable as one could be in that hostile environment. He was the 00’s Pistons Bill Laimbeer.

After Detroit won Game 2, Rasheed had this to say to the Pacers crowd:

The Pistons would defeat the favored Pacers 4-2 and go on to take on the role of underdog yet again in the NBA Finals, this time facing the Los Angeles Lakers. The Pistons took a surprising 2-1 lead, but most analysts and fans still expected the more talented and experienced Lakers to gain control of the series and win their fourth NBA Championship in five seasons. In Game 4 however, the Pistons seized control of the series, all because Rasheed Wallace had the defining moment of his NBA career in the 3rd quarter.

When Rasheed got T’d up in the middle of the third quarter in Game 4 after getting tangled with Slava Medvedenko, he responded by doing exactly what his fans always wished he would do rather than double down, berate refs with F-Bombs, and subsequently get kicked out of games; he unleashed hell on the Lakers for the rest of the game. He finished with 26 points and 13 rebounds (both ’04 Playoff bests) and the Pistons went on to close out the series and win their first NBA Title since 1990.

As I’ll get into later on in this countdown, the ’04 Pistons fascinate me for a variety of reasons. One of them: they’re the only Championship team in the 2000’s that made a major move that shook up their rotation in the middle of their championship season. The last team to win a title after making a big mid-season move was the 1994-95 Rockets, who acquired Clyde Drexler before the trade deadline, and even then, the Rockets were coming off of a championship season. You could argue it wasn’t necessary, or at the very least, it wasn’t solely responsible for that team having Championship pedigree.

It was necessary for Detroit to bring in Sheed, and it speaks volumes that not only did they recognize there was a void that desperately needed to be filled, but he was able to fill it so damn quickly and effectively.