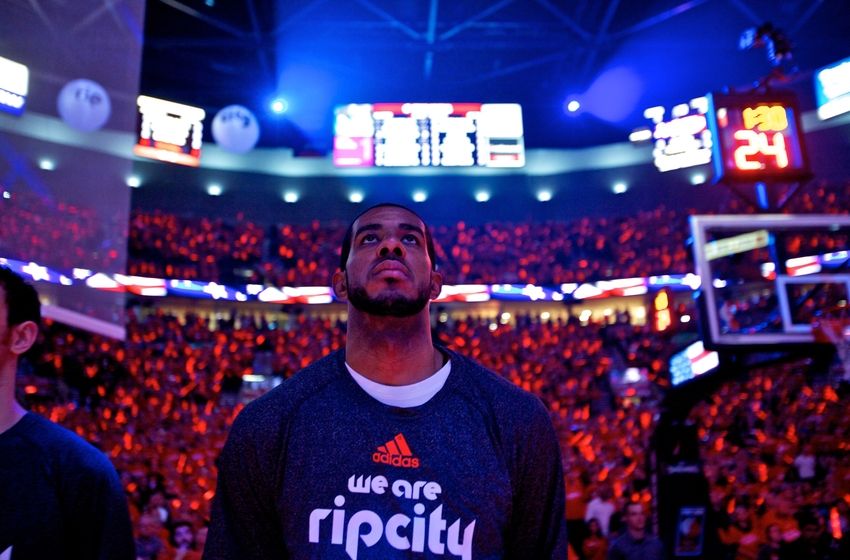 Remember in my Klay Thompson section how I talked about how my realization of how good Klay was came well after everyone else’s? Well, I feel like the opposite of this is true for LaMarcus Aldridge.

Take a journey with me back to the 2014 NBA Playoffs. The Blazers and Rockets were matched up in a 1st Round series and the more experienced Rockets were favored. Portland was coming off of a 33-49 season the year before, and neither Aldridge or budding star Point Guard Damian Lillard had shown the same sort of flair for the big stage as opponents James Harden and Dwight Howard had in the past. Despite all of this, I knew the Blazers had a chance in the series for one simple reason: Houston had no way to stop LaMarcus Aldridge.

Peak Aldridge was a match-up nightmare for opposing defenses, nearly the same way peak Dirk Nowitzki was (note: I said “nearly” … peak Dirk > peak Aldridge). Aldridge could drag your bigger defender 20 feet away from the basket and have his choice of method of attack; he could rain jumpers over him, or scoot past him on his way to the basket. Equally as effective, Aldridge could bully your smaller defender in the past, finish at the rim or hit that pretty fall-away jumper from the left block. On a normal night Aldridge is a bitch to stop so long as he’s getting his touches in the right spots. That’s been the case for the better part of his career.

On nights when Aldridge was completely locked in, he was capable of eviscerating your team’s chances of doing anything that resembled a solid defensive effort. And that’s what he did to Houston the first two games of that 1st Round series, in Houston. Aldridge slapped together a 46-point, 18-rebound performance in a two-point Game 1 win, and followed it up with a 43-point, 8-rebound showing that was 90 percent as masterful as the first. And after that second game a solid portion of the NBA fanbase (I’m talking basically all fans who didn’t have League Pass, or fans who lived on the East coast and never bothered to stay up for the 10:30 pm games) who hadn’t had the pleasure of watching Aldridge flash this sort of potential for years started with the, “Ya know, this LaMarcus Aldridge is actually really good!” buzz. It was a collective A Ha! moment for basketball fans who had probably been wondering if Damian Lillard, the more marketable of that Blazers duo, was really so talented that he could carry the Blazers to a 5th seed in the loaded Western Conference.

But if you had really been paying attention, and I had been, you knew that Aldridge had this in him for quite some time. He was never tremendous rebounder or a stifling defensive force, but Aldridge showed a knack for being able to put the ball in the basket early on in his career. His career numbers may not show this (the highest LMA ever finished a season in points per game was 7th); it required the eye test. It was necessary that you really considered what kind of match-up problems he gave opposing defenses, and the struggle it was to find someone who could slow him down, or at the very least pester him when he was locked in.

Just over a week after Aldridge’s back-to-back gems, Damian Lillard concluded the series with a walk-off game-winning three pointer that will forever be included in any Playoffs highlight montage. It’s worthy of that sort of distinction, but it’s a damn shame that this:

Has made people forget all about this:

And as much as I love Aldridge in San Antonio, partnering with Pop and Kawhi Leonard for the foreseeable future and carrying on the fundamental expectation of reserved excellence that Tim Duncan put in place in nearly two decades as a Spur, it’s a bummer that the Blazers apex was so brief, and even more so, not nearly as grand as it could have been.

Aldridge missed the chance to be apart of two separate cores in Portland that should have taken the Blazers to heights they hadn’t reached since Clyde Drexler and Terry Porter were leading the way in the early 90’s. Aldridge was drafted in 2006, and just a year later he was supposed to be one third of a trio that represented the future of the Portland Trail Blazers; a trio that would lead the Blazers back to the upper-tier of the NBA. No team was better set up for the next decade than the Blazers should have been. They should have been the heir apparent to the Lakers in the Western Conference. They should have gone toe to toe with the Thunder in multiple postseasons.

As you probably know, it didn’t work out that way. Brandon Roy had all of the potential in the world and in his short career he routinely showed that he had a sense of the moment that few young guys have; his knees couldn’t handle the nightly wear and tear of NBA action. Greg Oden was the most highly touted collegiate big man since Tim Duncan and was better when he was on the floor than people typically give him credit for; his knees gave out on him before he played an NBA game. In some sort of alternate universe due-over Roy and Oden both would have stayed healthy and the Blazers would have made an NBA Finals, I’m almost sure of it. Admittedly, I talk far too much about alternate universe’s when it comes to NBA stuff. I think I got too invested in Lost.

In a rare twist of fate, Aldridge was presented with an alternate universe second chance at that sort of contention in Portland later in his tenure as a Trail Blazer. Paired with Lillard and a diverse cast of role players, the incarnation of the Blazers that existed between 2012 and 2015 had the same sort of potential that the earlier version failed to reach. It’s understandable why Aldridge decided to leave Portland for the model of excellence that is the San Antonio Spurs, but damn, just imagine Aldridge out there closing games with Lillard and CJ McCollum. How about if they managed to keep Nic Batum and Wes Matthews? How do you stop that crunch-time five? 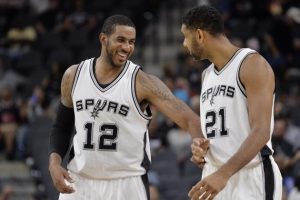 I guess there’s no reason to complain… Aldridge found his third chance for contention with San Antonio, and in reality it may be the best chance he’ll end up having. The furthest he got in Portland was Round 2. Through one season with the Spurs, he’s made it equally far. He’ll never be the next Tim Duncan, but the Spurs won’t ask him to be that. They just need him to be the guy he was in Portland: A reliable, multi-faceted scoring option that almost always requires a double-team and can get buckets just as effectively in the paint as he can on the perimeter. A guy that can get hot and single-handedly win a game every so often. A steady defender and rebounder that simply won’t screw things up. A quiet, hard-working big that just cares about winning.

If there were any questions about what Aldridge’s motives were as a player or person, they were answered when he chose San Antonio over Portland, Phoenix and everyone else. He picked winning and sacrifice and system over individual numbers and notoriety. Maybe once Tony Parker and Manu Ginobili retire the Spurs will lean on Aldridge like the Blazers once did. Perhaps Kawhi Leonard will be the co-star that Aldridge needed to get past the 2nd Round of the Playoffs.

LaMarcus Aldridge will never be the glamorous star his skill-set allows him to be. But even if he’s never glamorous, the fans that have been paying attention know Aldridge is without question a star.