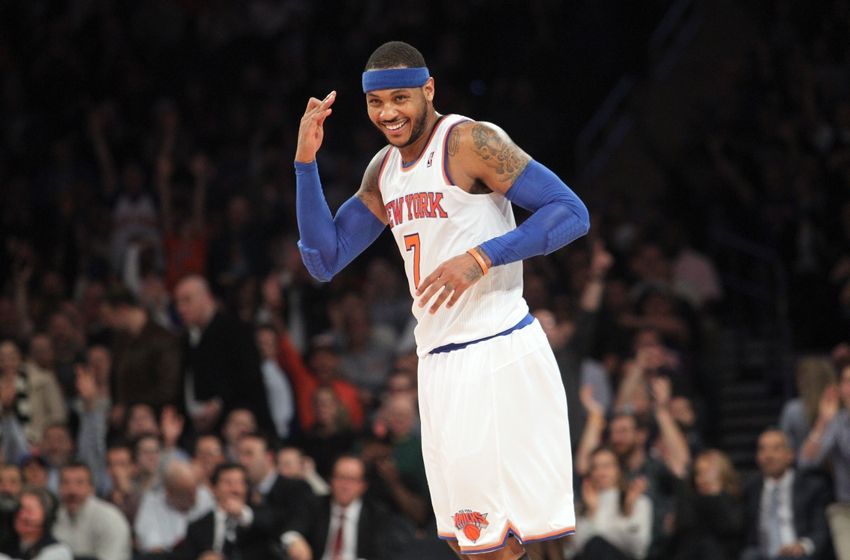 Determining the weight and relative success of the career of Carmelo Anthony is a different sort of exercise than we’ve been used to thus far. Very few great players have faced more questions about their “value” than Carmelo Anthony has. Most of the time we’re fully aware of and comfortable with discussing how valuable a player is; with Melo it’s a little more difficult to digest. He’s finished in the top ten in MVP voting only twice, fewer than guys like Ben Wallace, Blake Griffin and James Harden, and a surprisingly low number for a guy who just two years ago claimed he was the most underrated star player in the NBA. Then again, if Carmelo is as underrated as he claimed, perhaps its makes sense that he’s only finished in the top ten in MVP voting twice.

This mystery goes further than MVP finishes though … it gets even weirder when you try to absorb other bits of Melo’s career resume. Consider the following points:

-He’s a three-time Olympic Gold Medalist, and arguably the most successful international basketball player ever. That means something in the grand scheme of this list. What exactly or how much it means, I’m not completely sure. But it’s at least a nugget that I can’t wholly disregard.

-Melo’s made it to the Conference Finals only once in his career, and only twice has he made it past Round 2 of the Playoffs. Again, this means something in the grand scheme of this list. What exactly or how much it means, I’m not completely sure. It’s not all Carmelo’s fault that he’s never made an NBA Finals, but he’s also not fault-free either.

-Melo has averaged at least 20 points per game in each of his first 13 NBA seasons. There are eight, and only eight players who have accomplished that in league history: Michael Jordan, Kareem Abdul-Jabbar, Shaquille O’Neal, Hakeem Olajuwon, Patrick Ewing, Julius Erving, Carmelo Anthony and LeBron James. Take a few seconds to look at the names on that list, and really consider how impressive it is for Carmelo to be apart of it. Once you’ve done this, I give you permission to move on.

No seriously, think about the guys on that list again and consider how remarkable it is that Carmelo Anthony is one of them.

-Speaking of LeBron, Melo will always be unfairly judged in comparison to LeBron James. That may no longer totally be the case anymore since LeBron has vaulted himself into a rarefied stratosphere of NBA stardom, especially over the last five seasons. But when LeBron and Carmelo came into the league together in the 2003 Draft, you couldn’t mention one without mentioning the other. And here’s something that you’ll most likely be surprised to hear me say: Carmelo should have won Rookie of the Year over LeBron. LeBron showed more upside in Year 1, but Carmelo was arguably better and more valuable (Melo carried the Nuggets to a postseason appearance while it took LeBron until season three to get there).

Yet, with all of that said, we still haven’t figured out how to measure how valuable Melo has been throughout his career. What Carmelo could very likely end up being most well-remembered for is our perception of how teams would be with or without him. Carmelo hasn’t been a journeyman by any stretch of the imagination; he was traded only once in his prime, and despite free agency flirtation and swirling rumors, he’s never made a move in the summer silly season. However, Melo’s potential movement has been a frequent topic of conversation throughout the years; whether fair or unfair, it’s been some sort of indirect measure of his value over time.

Since we haven’t had any luck elsewhere, let’s run with this. Here’s a breakdown of how things were going/went for every party involved before and after every actual or rumored change of scenery for Carmelo Anthony.

You could make the argument that the Nuggets were fortunate that Melo wasn’t content to sit back and finish out the 2010-11 season in Denver, otherwise he would have left them with nothing to show for the eight previous years. Melo requested a trade to the Knicks and New York had to give up a handful of playable bodies to bring in Carmelo and some spare parts. And here’s the kicker … in the two and a half seasons leading up to Denver trading Melo, the Nuggets won 63 percent of their games. In the two and a half seasons following the Melo trade they won 65 percent of their games. Maybe I’m overthinking it, and there are definitely other factors to consider, but this seems … interesting. 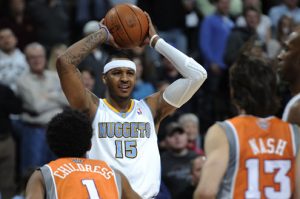 Melo failed to display the business savvy he now prides himself on, and because of that the Knicks had to give up four rotation players and a 2014 1st Round pick to acquire him when they could have just signed him during free agency six months later if he was patient. But Melo forced his hand, made his demands well-known, and altered a tremendously fun Knicks season in the process. New York was only 28-26 before the Melo trade, but they stumbled to a 14-14 record down the stretch and never totally gelled. Would the Knicks have been slightly scarier if they stuck out the 2010-11 season rolling with Amar’e, Ray Felton, Danilo Gallinari, Wilson Chandler and whatever the hell other scrubs they were employing at that point? I actually think the answer is yes.

Remember how there were some idiots at the time who were suggesting that the 2011-12 Knicks would be better off if they took the metaphorical keys away from Carmelo Anthony and handed them over to Jeremy Lin? Oh wait, was I the only idiot suggesting that? I was? Well, shit. Let’s move on before I lose any more credibility.

This was Carmelo’s best two-season stretch of professional basketball, and at least in my opinion, when he proved to be most valuable. In the 2012-13 season he led the league in points per game, finished third in MVP voting (and actually stole an MVP vote away from the should-have-been-unanimous MVP LeBron James) and carried the Knicks to their first Playoff series win in 13 years. A year later Melo was even better; he finished second in scoring and most impressively, showed a greater commitment to giving a crap about things like playing defense and making teammates better than he had at any point in his career. I don’t know if everyone would agree with me, but this was my favorite Carmelo season. Always totally locked in, still reasonably near his athletic peak, as dedicated to being a good teammate as he ever had been. It felt like Team USA Carmelo finally made his way to the National Basketball Association.

This should have been Carmelo’s move in the Summer of 2014. He missed his opportunity to be surrounded by quality role players and co-stars and a top-tier coach (all of which he lacked for the majority of his career) and contend for a title. Melo’s deficiencies would have been hidden and his strengths would have been the saving grace for a Bulls team that could never quite get over the hump because they lacked a big-time clutch scorer who wouldn’t back down from a showdown with LeBron (Derrick Rose wasn’t that guy). For the record, this is one of the five biggest free agency what if’s of the 21st Century. It impacts the New York Knicks, Chicago Bulls, Tom Thibodeau, Minnesota Timberwolves, Cleveland Cavaliers, Phil Jackson, Kristaps Porzingis and so on.

I just wanted to remind everyone that this all-too-obvious Melo for Blake deal is still on the table. Still there, still making all the sense in the world for both teams, still the best chance for Carmelo to make one more deep Playoff run.

As has been the case for the duration of his career, Melo’s value moving forward is still virtually unknown. The Knicks are in the unenviable spot of being stuck between title contention and rebuilding They’re in basketball purgatory, and Melo is at the forefront. He’s made it clear that he wants to stay in New York and remain a Knick, but the growing belief is that it’s in the best interest of the franchise to move Carmelo before his value diminishes. There’s no doubt that he can still bring it; on his best nights he’ll still be just as impossible to stop and just as fearless as he was in his prime. Where he can be most valuable in the upcoming years is in taking a role as overseer of the development of Latvian sensation Kristaps Porzingis. If Carmelo can provide Porzingis the sort of veteran leadership he needs in order to be the guy in New York, it may be his greatest accomplishment yet. At the very least, it will be something he’s never done before in his illustrious, and wildly misunderstood career.