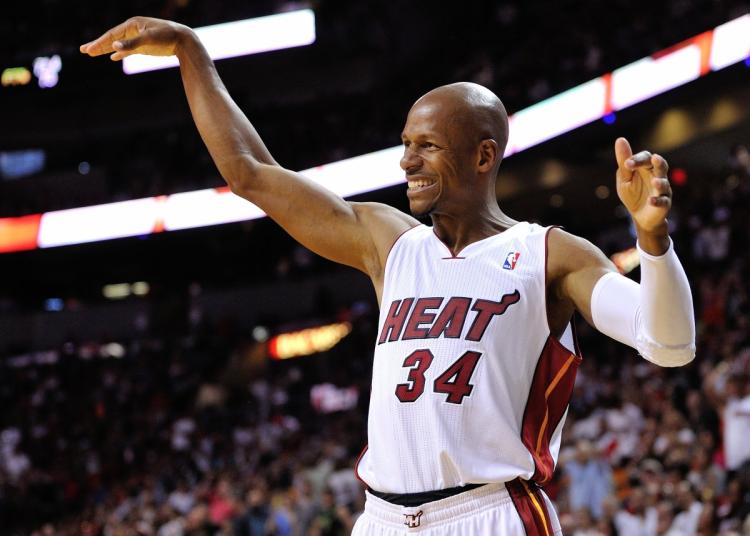 Weighing the significance of the career of Ray Allen wasn’t easy. On one hand, if you look at the raw numbers Allen obviously had an absolutely astounding career. Allen went to the NBA Finals four teams and came away with two championship rings. He currently sits atop the all-time three-point shooting list, and in the 2000’s alone he made nearly 500 more three-pointers than Jason Terry, the player who is second on the list. Of the 57 players who have made 1,000 three’s in the 21st Century Allen is one of only ten who hit at least 40 percent of their shots from downtown (shout out to Baron Davis, who hit 32 percent from three and sits at the bottom of that list). Also notable, Allen is one of only ten players in the 2000’s to play in ten All-Star games, a display of rare longevity and durability.

Here’s where the placement of Ray Allen gets tricky: how should we feel about the fact the big moments Ray was apart of or had a hand in creating became more significant as his role became smaller and smaller? Here’s what I mean … how much of Ray Allen’s Milwaukee Bucks tenure do you remember? Probably not too much, right? In 2001, along with Sam Cassell and Glenn Robinson, Allen co-led the Bucks to their first Conference Finals since 1986, but fell short to Allen Iverson‘s Philadelphia 76ers, but for the most part, Allen’s time there was relatively unspectacular.

How about his time in Seattle? Do you really remember this four-and-a-half year period fondly? Sure, Allen peaked as a Sonic. He put up his career best numbers there and set a then-NBA record in the 2005-06 season when he hit 269 three-pointers. But what significant Ray Allen moment can you really think of from 2002 through 2007? There isn’t one. Ray and the Sonics made the Playoffs just once and they were bounced in Round 2. Four years later the team was playing in Oklahoma City.

This may sound like an all-out assault on Ray Allen, but all I’m doing is assaulting you with facts. And the fact is this: peak Ray was a durable professional who was such a prolific shooter from distance that you need to at least give him a little bit of credit for pushing the NBA in a direction where the three-ball is becoming more normal and necessary than it ever has been. But similar to Reggie Miller, another prolific three-point shooter, Ray wasn’t equipped to carry a team on his own. He didn’t have the all-around game to put a team on his back for eight months and be a true title contender. If Ray managed to get an open look late in a game did you expect him to make it? Of course. But against a great team, did you expect the game to even come down to Allen having a chance to win it? 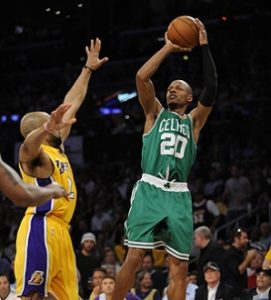 When Ray went to Boston in the Summer of ’07 it was the first time since the ’01 Milwaukee season that he was cast in a role that was suitable for him. Just like Chris Bosh was clearly a level behind LeBron and Wade when the Heat Big Three formed in 2010, Allen was inferior to Garnett and Pierce too. He never faced the kind of pressure that Pierce and Garnett did; Ray was the third man in line, and that was fine. Again, I’m not trying to cut Ray down. If Ray Allen was your third best guy in 2008 you were in really good shape. There’s a reason why the Celts won 66 games and an NBA title that first season they were together.

Allen was terrific in the ’08 Finals, setting a then-Finals record with 22 three-pointers made throughout the series, and clinching Boston’s 24-point comeback in Game 4 with a lay-up with 16 seconds left. It was the first postseason series where Ray Allen left a mark and gave fans a glimpse of what he was truly capable of … as the third best guy on a championship team. This would continue for the next two years; Ray scored 51 points at Chicago in 2009, just a week and a half after burying a cold-blooded game-winning three in a must-win Game 2 in Boston.

In the 2010 Finals Allen set a Finals record with eight three-pointers in Game 2 in Los Angeles, but by this point Rajon Rondo had supplanted Allen in the Celtics Big Three. By the end of the 2011 season Ray’s name was being tossed in trade rumors. And by the mid-July 2012, Ray Allen was a member of the Miami Heat, unknowingly less than one year away from hitting one of the biggest shots in professional basketball history.

Now here is what I was talking about earlier. Of all of the players in the top twenty of this list, nobody’s statistical peak was less interesting or less important than Ray Allen’s. Allen’s greatest accomplishment in those peak Seattle years was accumulating three-pointers so that by the time he had reached the twilight of his career he could be called the NBA’s three-point king, an earned distinction for an absolute marksman from downtown. But aside from that, the legacy of Ray Allen wasn’t advanced until he was at an advanced age. Ray’s career became more significant in his later years because he had the opportunity to play in more significant games as his role diminished. And without question, the most significant game in Ray Allen’s career was Game 6 of the 2013 NBA Finals.

You certainly have seen the aforementioned shot: the chaotic, back-peddling, uber-clutch triple that saved the 2012-13 Miami Heat from the same kind of fate that the 2015-16 Golden State Warriors weren’t saved from. Just in case you need a reminder …

Of course, this shot didn’t win the series, or even the game, but it’s significance is unparalleled. It’s arguably the most clutch and most important shot in basketball history, but the angle I’m more concerned with for now is how that shot will forever alter the way we feel about Ray Allen.

Ray’s time as the undisputed three-point king is limited. Stephen Curry is only a few seasons away from surpassing Ray as the all-time leader in three-pointers (all Steph needs to do over the next five seasons is average 300 three’s per year and the record is his). There have been a handful of players who are equally as technically sound as Ray was, and there are many guys that were better shooters off the dribble than Ray ever was. But no shooter in NBA history has aged quite as gracefully as Ray did, and few players ever would have had the presence of mind to back-peddle sprint to the perfect spot behind the three-point line in the corner like Ray did in that messy Game 6 sequence, let alone make the shot.

So what does it say about Ray’s career that his most significant moments occurred when he was past his peak? My take is that it highlighted Ray’s obsessive dedication to his craft and his poise in big moments, two things any player would be lucky to be remembered for.