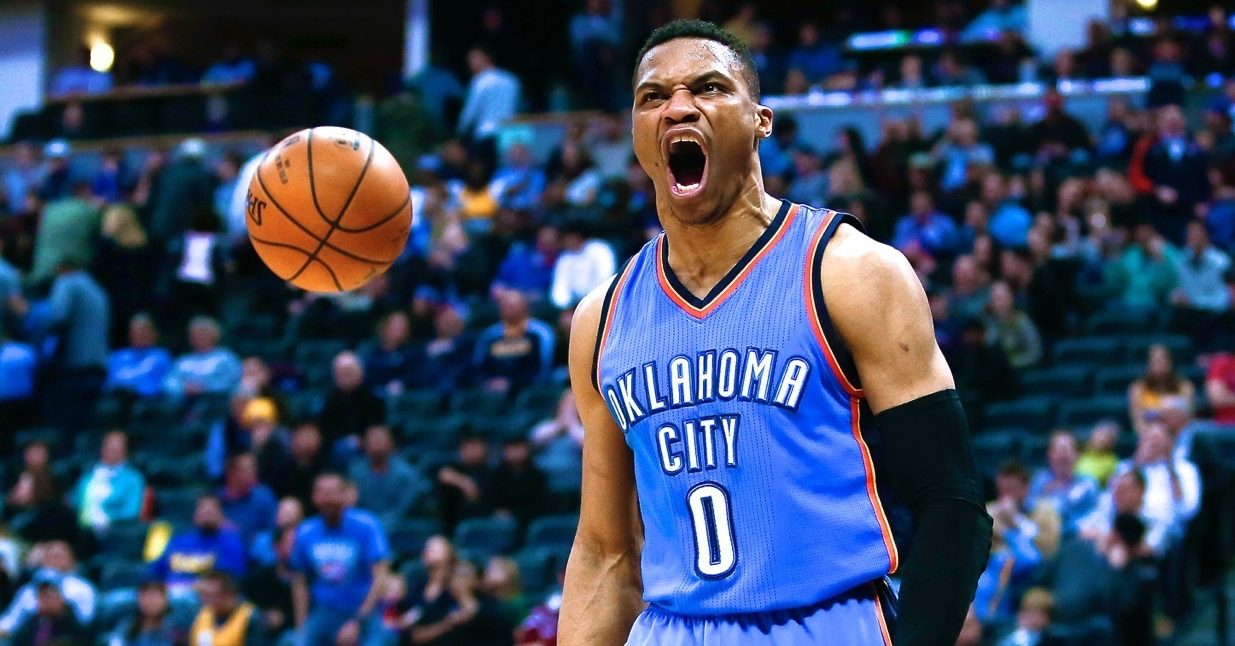 A couple of weeks ago I talked about my dissatisfaction with pre-NBA Draft player comparisons and how most of the time they are either appearance-based or they only look at the very simplest and most obvious attributes associated with a players game. This widespread laziness bugs me and I like to think I avoid participating in non-sense like that. With that said, today I’m going to make a comparison between two individuals, but I’m pretty sure nobody else has ever come up with this same comparison, and that excites me a great deal.

Now I should note, I did absolutely no research to see if anyone has indeed made the same comparison I’m about to make since I’m pretty confident that I would have heard about it by now because it’s absolutely brilliant. If anyone has beat me to the punch, I apologize and give you full credit for coming up with it first, but I really didn’t steal your idea. I thought of this all on my own while I was on my lunch break at my elementary school job, which makes it even crazier that this comparison popped in my head while I had been dealing with little children immediately before these thoughts entered my mind.

Russell Westbrook has been compared to quite a few individuals in the past. NBADraft.net compared him to Rajon Rondo and Monta Ellis before the 2008 NBA Draft. As Westbrook established himself as one of the very best players in the world and blew those two comparisons out of the water, bigger names have started to come to mind when you think about Westbrook, the player. Russ has been compared to a young LeBron James in terms of sheer athleticism. I watched LeBron from the very start, his rookie year, and I’ve had my eye on Westbrook for almost a decade now. This one holds up. In the last ten years LeBron and Westbrook are the two guys who absolutely guarantee to give you at least one “How the fuck did he do that” play per game. LeBron is a bit more natural; he’s just a more impressive moving and looking human figure, so even plays when it looks like he’s coasting he can do something that doesn’t seem humanly possible (like those very routine chase down blocks that are a thousand times more difficult that LeBron makes them look).

Westbrook is a little different than LeBron since it feels like you’re watching a game on fast forward if you are locked in on Russ specifically. Russell Westbrook is the human embodiment of the irresistible force, and so far I haven’t seen him come into contact with the immovable object. If he has he went right through that motherfucker and it’s no longer a thing or a saying. Russ plays at warp speed and as a result of that he does things that might be humanly possible, but the force with which he does them puts him in a class by himself. For example, a lot of guys could take an in-bounds pass and go coast to coast and finish with a dunk. Not an impossible thing to do. Very few people ever could have dribbled down the court so fast, jumped from so far and dunked it as hard as Russ did here:

Some dudes are just a different breed of athlete. So that, plus the bewildering box scores, is why the LeBron thing makes sense. If we’re talking numbers only, we can begin to wonder whether Westbrook is just the modern day Oscar Robertson. If and when Russ averages a triple double, it will be more impressive than when the Big O did it. Shoot, Westbrook’s near triple double averages the last two seasons are more impressive. Don’t believe me? Well, it’s time for a history lesson. 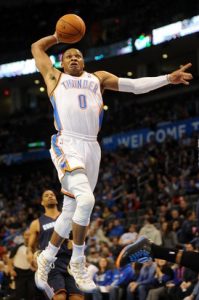 Most recently we’ve seen Westbrook compared to Kobe Bryant and/or Michael Jordan, a well-deserved acknowledgement that Russ is now carrying the torch for all over-competitive lead guards who would literally (figuratively) cannibalize an opponent on the floor just to gain the upper-hand. This isn’t an assertion that Russ will be the next Kobe or the next MJ (though, I seem to be more optimistic that this could be the end result than it seems like most people are), it just means he’s wired the same way. No playing buddy-buddy with opponents. No possessions off. No surrender late in close games. No taking it easy on inferior competition. Just cold-blooded fury all 48 minutes. Kobe tried putting his Achilles back into place after it ruptured. Russ played the end of a game with a broken bone in his face. We’re talking about legitimate gamers.

Even though all of these comparisons do indeed make sense and I wouldn’t consider any of them the least bit lazy, I have an even better one to hit you guys with. It’s cross-racial, and you never see those kind of comparisons. It’s between athlete and movie character, which is even more rare. The movie character is an erratic drug lord, which on the surface isn’t remotely similar to an NBA player, but in this case it really does make for a suitable comparison.

Guys, Russell Westbrook is so much like Tony Montana, and I’m not even talking about the all-too-obvious parallels between the final scene of Scarface and the way Westbrook, now without Kevin Durant, is going to approach this season.

Westbrook will undoubtedly stand alone, guns blazing against an militia of Bolivian thugs (or, in this case, all Western Conference contenders) pumping bullets into each one of them until he takes too many himself to be able to stand any longer. Can’t you just see Russ in a 1 vs. 8 1st Round Playoff series against the Warriors, staring down Durant, Curry, Draymond, Klay and Iggy and thinking to himself “Who do they think they’re fucking with? I’m Russell Westbrook! You fuck with me, you’re fuckin’ with the best!” the same way Tony thought he could kill each and every one of Sosa’s men? I can imagine that, and it will be epic.

But the comparison goes beyond the inevitable end to Westbrook’s upcoming season and the way Tony’s empire fell. Russ and Tony both came from humble beginnings. Russ was a late bloomer that wasn’t heavily recruited as a high schooler until he hit a growth spurt before his junior season. Tony was a Cuban refugee who washed dishes at a food stand when he came into the United States. Vaguely similar, right?

Russ was an afterthought entering UCLA, and he didn’t even carve out a big role for himself while he was there. He ended up the fourth pick because he showed ridiculous promise as an athlete. It was unclear what position he’d play or what type of player he’d end up being, but his potential was sky high. Tony gains the approval of his boss, Frank, after he refused to give up the location of a large sum of a money to a bad-ass Colombian with a chain saw after a drug deal went bad, despite the fact that Tony watched as the aforementioned Colombian cut up a member of Tony’s crew. Tony then stole Frank’s wife. What a boss maneuver. 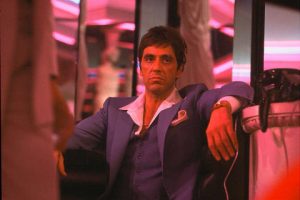 Russ and Tony each climbed the ranks in their respective fields thanks to ridiculous confidence in oneself, a degree of well-deserved arrogance, an identifiable charisma (I mean, have you seen the way these two dress?), a mean streak and an insane quench for more success than they already had. They out-hustled almost everyone else and it didn’t matter who they had to step over to get there. Observing each of them at their pinnacle, it really did/does feel like the world is theirs. The last few years in particular Russ has really come into his own … I mean, the “Who’s better, Kevin Durant or Russell Westbrook” is a real conversation and that speaks volumes about Westbrook’s power since Durant is a 7’0″ tall basketball freakshow that is an almost perfect scorer.

Of course, both Russ and Tony are fatally flawed (being a fatally flawed drug lord is drastically different than being a fatally flawed NBA player). Tony’s flaws were cocaine, greed, pride and a strange, borderline incestuous obsession he had with his sister. They were more difficult to manage that Russ’s, which are reckless play and spotty perimeter shooting. If Russ can improve his jumper (not hard to imagine … it’s actually a rarity that guys wired like Russ don’t improve at some point) and learn that he can play with multiple gears (a little more difficult to imagine given his wiring), the NBA really can be Russell Westbrook’s, just like the world of cocaine and murder in Miami could have been Tony Montana’s.