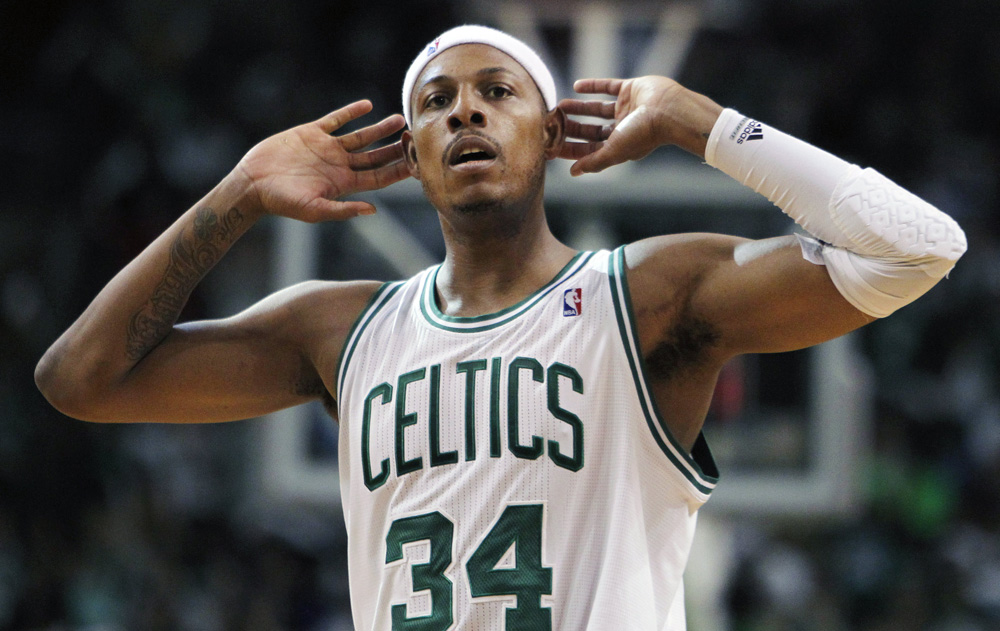 In honor of the NBA player that I’ve spent the most time fearing, agonizing over and downright loathing, here are my ten favorite Paul Pierce moments … and by “favorite Paul Pierce moments” I simply mean I’m going to discuss the shit that’s really bothered me over the years, and I’m going to do so in a fashion that would suggest that all this time I’ve actually viewed “The Truth” quite favorably.

Favorite Paul Pierce Moment #10: The time when Boston was trailing by 21 points going into the 4th quarter against the New Jersey Nets in the 2002 Eastern Conference Finals, and Pierce put the Celts on his back, scored 19 points in the final quarter and led Boston to a four-point win. I’ll be honest, I wasn’t anti-Pierce at this point. Paul Pierce was just another guy to me. He might as well have been Jerry Stackhouse or Michael Finley or any other capable wing scorer before that game. Of course, Pierce’s heroics vaulted him past guys who weren’t capable of that sort of performance in a game with those stakes, and Pierce ended up being much more significant, both historically and personally for me than either Stackhouse or Finley would. To my surprise, he’d end up surpassing every other wing player in the league at that moment, save for Kobe Bryant.

Favorite Paul Pierce Moment #8: The time when this confident S.O.B. decided to “Tebow” just for the hell of it as the Celtics were wrapping up a road Playoff win in Atlanta.

Favorite Paul Pierce Moment #6: Hey Atlanta readers, don’t get down on yourselves. The Truth crushed the dreams of Canadian basketball fans too!

Favorite Paul Pierce Moment #5: The time when Paul Pierce responded, “I’m the best player. There’s a line that separates having confidence and being conceited. I don’t cross that line but I have a lot of confidence in myself,” when he was asked if Kobe Bryant was the best basketball player in the world. It’s totally understandable why Pierce would have this sort of extreme confidence in himself. He had just gotten done outplaying Kobe during the ’08 Finals, and frankly, if I survived 11 stab wounds I know I would have all kinds of issues keeping my head from getting too big. I’d be making people call me “sir” and all kinds of arrogant shit like that.

And let’s be real about something … a big part of what made Pierce so great, and so memorable, was an extreme confidence in himself that few players ever have in themselves. Pierce was an assassin, not only because he was supremely skilled, but also because every time he stepped on the court he truly believed he was the best and most dangerous guy out there. That mental game is half the battle, and Pierce won it way more often than he lost it.

Favorite Paul Pierce Moment #4: This isn’t so much one singular moment, but rather a collection of moments … every-game moments that are monotonous and aggravating if you don’t have a deep personal love Paul Pierce, and the way Paul Pierce plays basketball. Pierce’s game is an annoyance. It’s even more annoying than his patchy facial hair and his hoarse voice and his smug smile. Pierce has a large arsenal of individual moves and a firm understanding of what moves to pull out of his bag of tricks depending on who is guarding him. His use of shot fakes to get defenders in the air or off balance is textbook. The way he uses herky-jerky hesitations and stutter-steps and half-spins and other underused moves to create space or get himself to the rim even though he’s always been a step slower than you’d think he’d be is cerebral and underappreciated. The way he always get to whatever spots he’s most comfortable in late in games and makes teams pay with a raggedy-looking step-back J is fucking maddening because it’s perfect. It’s always perfect looking and it always goes in.

Favorite Paul Pierce Moment #3: The time Pierce won Finals MVP, a well-deserved acknowledgement of Pierce’s value after perspective on that matter had seemingly been lost once Kevin Garnett and Ray Allen were brought to Boston. Pierce was a Celtic all along. Even when things in Boston were shitty and the Celts were trying to rebuild Pierce kept his head down, kept playing hard, never bitched about wanting to be traded, only wanted to remain a Celtic and win a championship as a Celtic. His peak years had come and gone, and he only had one Conference Finals to show for it. After Garnett and Allen arrived, Pierce wasn’t his own guy anymore. He was just a part of a trio; a trio that couldn’t get it done as individuals.

Pierce was one of the guys who really deserved a championship if there were such a thing as deserving championships. Pierce’s prime may have ended a couple of years prior, but he extended his prime in a way that few aging vets have a chance to do. Pierce had the luxury of being able to pace himself throughout regular seasons and turn it on when Boston really needed him. From the time the Big Three formed in the 2007 offseason, you’d be hard-pressed to find any player with more go-ahead or game-winning shots in big moments than Pierce. His statistical prime may have been cut short because he started sharing the ball with KG and Ray, but his prime as a crunch-time killer continued long after that. If there were any need for affirmation of this idea, Pierce’s Finals MVP did just that.

Favorite Paul Pierce Moment #1: The time Paul Pierce was at least partially responsible for LeBron’s 45 point performance in Game 6 of the 2012 Eastern Conference Finals, and every memorable moment he’s had since then.

Look, I know you didn’t come here to read about LeBron James, but this is related in a big way. LeBron was deemed the chosen one as a Junior in high school in 2002. He had people at his feet praising him as a 16 year old, and for the most part, that was the case his entire early NBA career. The one exception, the one guy who never backed down from “King James,” the one guy who always went at him was Paul Pierce. Pierce and LeBron nearly got into a fight in the locker-room area after a pre-season game in 2004. The bad blood between these two didn’t start in 2008 when they met in the Playoffs for the first time. It started before LeBron James was of legal drinking age. 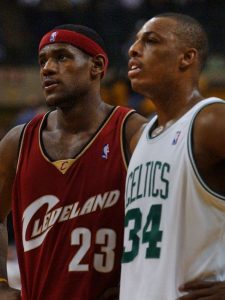 And time after time, the lesser-known, lesser-physically gifted Pierce got the better of LeBron. In 2008 LeBron outscored Pierce 45-41, but Pierce’s Celtics got the better of LeBron’s Cavs. In 2010 the heavily favored Cavaliers were upset in Round 2 by Boston, in large part because Paul Pierce pestered LeBron so much defensively in the last three games of the series. Pierce, for the most part, always had LeBron’s number, and he always reminded him of it. He was always yapping, always trash-talking, always doing whatever he could to gain the mental edge on his physically superior rival.

When Pierce buried that dagger three in Game 5 in 2012, I think it pushed LeBron to the breaking point. I think LeBron’s stoic destruction of Boston in Game 6 was more than just a basketball player being motivated for a win or go home Playoff game. I think Pierce took it to a point where things were personal. I think, as a man, LeBron knew he had to respond in some tangible way in Game 6, and he did that by killing Boston’s Big Three.

Now that time has passed and Pierce’s best days are behind him it’s easier to understand why I viewed him as such an agitant for so long. It’s also easier to understand why Boston fans loved him. In a sense, watching Pierce go toe to toe with the likes of Kobe Bryant and LeBron James was like seeing a modern-day David and Goliath battle. Pierce wasn’t blessed with the jaw-dropping athleticism or smoothness or raw strength or the aesthetically pleasing nature of his game like LeBron and Kobe were. But you better not tell Paul Pierce he wasn’t Goliath. Paul Pierce carried himself like he was the biggest, baddest giant in a league that was full of them.