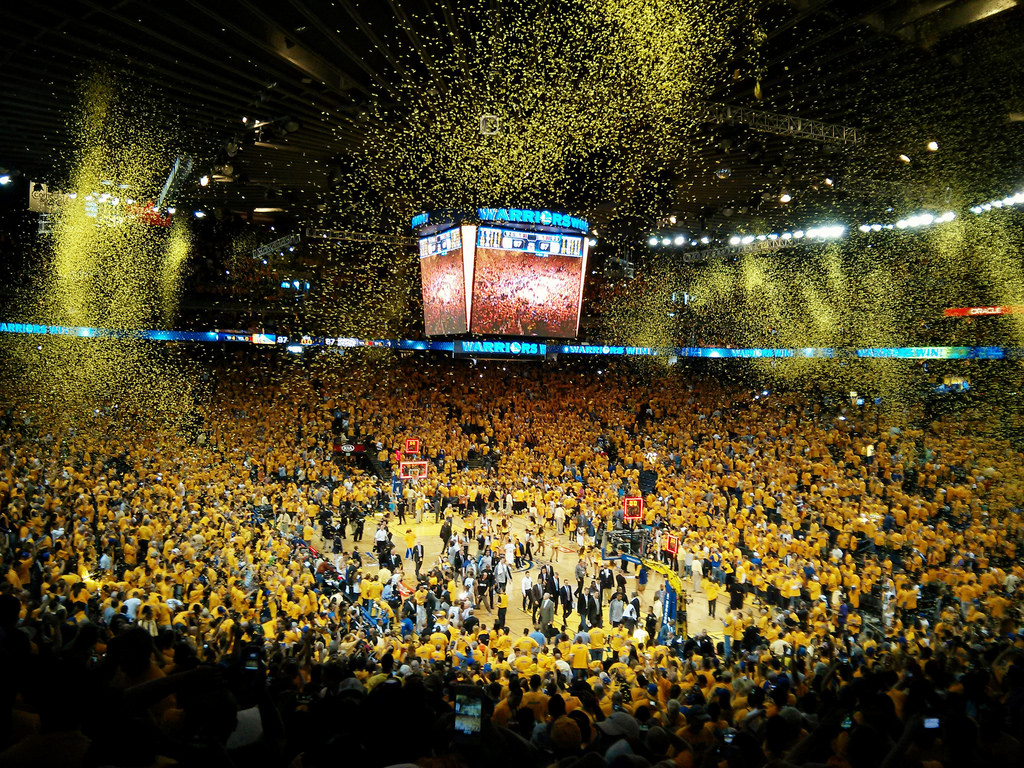 Sports are cool because they allow people to get together and watch athletes be much better at things than they are. I wish I could 360 windmill dunk a basketball, but unfortunately I’m much more suited to binge watching 360 hours of Netflix. (I could probably beat Stephen Curry at The Walking Dead trivia though, so there’s that.)

One of my favorite places that sports brings people together is Twitter (mostly because I don’t like having actual interactions with other actual humans). Specifically, NBA Twitter is the best to participate in. The sense of community is awesome. But do you know what’s not awesome? Getting shit for being a “bandwagon fan.” That kind of negativity isn’t necessary in an already negative “Trump could be our President” type of world. However, there are times when certain “bandwagon” fans can get insufferable. Therefore, I’ve thrown together some guidelines to help determine scenarios when it is acceptable and also unacceptable to be a “bandwagon” fan.

*Note – I will be using the Golden State Warriors as an example quite a few times here on out. They just happen to understandably be the team in which the most “bandwagon” talk will center on this year.

“I really like a player on a team, so now I support that team” – Acceptable

I’m a great example of this scenario. My favorite NBA team is the Orlando Magic. However, because they are a constant dumpster fire of an organization, I tend to gravitate towards great players on other teams in the league. This started with Blake Griffin. After he turned Timofey Mozgov into a verb, I was all aboard the Griffin wagon, and in turn I found myself supporting the Clippers throughout the season. It was fun supporting a team Chris Paul played for as well, despite how fundamentally against the “Banana boat” gang I usually am. This scenario also played out when I started noticing that Steph Curry was more machine than man, and could probably win a game of H.O.R.S.E against Jesus himself. This led me to also realize Klay Thompson is probably not human, and before I knew it I was a fan of the Warriors.

“I have been a fan my entire life, so I make sure people know I’m better than them.” – Unacceptable

You’re not a better fan. Sure, being a fan of a team your entire life is a great accomplishment. Not everybody can handle the ups and downs a sports team can put you through. It does not mean that you love your team more than someone who decided to be a fan recently. When the Magic get back to the NBA Finals in 2047, I won’t get mad at the new “bandwagon” fans. I won’t need to remind them I was a fan in 2016 when they started five centers. I’ll just enjoy the experience with fellow Magic fans, old and new.

“I live in a team’s home city, so I am a better fan.” – Unacceptable

Geography plays no part in the amount of passion someone can have for a team. I’m not saying it doesn’t create a sense of community, which is great. But it is not great to put someone down for liking the Warriors, just because they don’t live in the Bay area.

“I like a team for its pretty colors.” – Acceptable

I’d be lying if I told you I didn’t sometimes root for the Hornets because of their color scheme. Although, I don’t think it is possible to bandwagon the Hornets.

“You are a fan of a good team I don’t like, so you’re a bandwagoner.” – Unacceptable

While the point I’m trying to make here is people should almost never be put down for being a bandwagon fan, you DEFINITELY have no right to have an opinion if it does not concern your team. So you’re a Thunder fan who just happens to be real salty about the departure of Kevin Durant? Don’t go on a social media tirade against some new Warriors fan you feel deserves it. You’re just upset you live in Oklahoma City. (I’m making an assumption that the only Thunder fans left live in Oklahoma City).

”I really like a team that LeBron plays for.” – Unacceptable

I call this the “Sonny Giuliano” rule because he is the biggest “fan” of LeBron I know. There may be some of my bias creeping into this very specific situation. I’m zero percent sorry.

“A team won the championship, and now they’re my favorite team.” – Acceptable

This may be contrary to popular belief, but there is nothing wrong with wanting to root for winners, and don’t let anybody try to tell you differently. Think about it this way: Leonardo DiCaprio is a fantastic actor. Everybody knows he is a fantastic actor. There was also a general consensus that it was a travesty Leo had never won an Oscar. Now when he finally did win an Oscar, us Leo fans didn’t have an aneurysm accusing the Academy of bandwagoning, we were just happy he got the recognition he deserved. This kind of thinking should apply to sports as well. It is much more fun to revel in greatness together, than to fight over who was there first. (I don’t always agree with myself on this one, but I was trying to keep any bias out. Also, I needed an excuse to write about Leo.)

What I’m trying to say here is let’s just stop using the term “bandwagon” so very often. Let’s save it for situations when it is truly warranted. Like when someone buys a LeBron jersey.

Truthfully, the only rule you need for any scenario in life is this: Don’t be a dick.