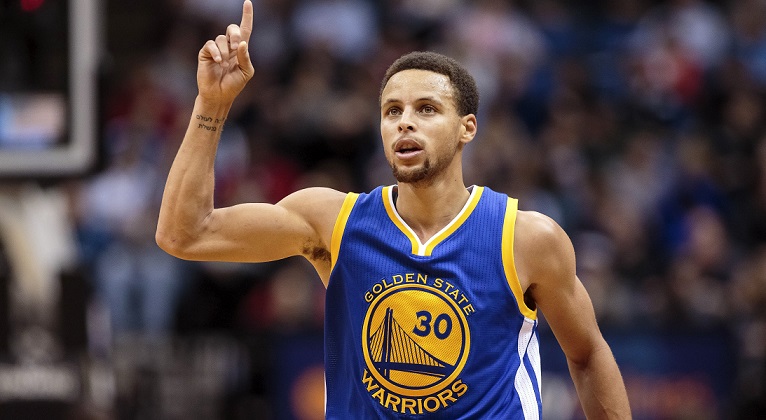 I know this next statement will seem crazy, given as though the Stephen Curry hype train rolled through the NBA at speeds that haven’t been reached since MJ in his heyday, but I think we’ve managed to underrate Stephen Curry. Listen, I know it seems nuts to say that considering how quick nearly everyone (stubborn old-timers excluded) was to anoint Curry the greatest shooter of all-time and bestow upon him many almost-endless praise and various other titles that touted his greatness, but to a degree, I think there is still a little bit of room for the perception of Steph Curry to catch up to where he actually is as a player.

Let’s rewind before we move forward though. Let’s go back to Steph’s breakout performance in the 2008 NCAA Tournament. This countdown doesn’t include collegiate accolades or success (otherwise you’d have already read the most beautifully written Adam Morrison feature ever put together), but for the sake of figuring out where Steph Curry is in comparison to where the NBA fanbase has put him, it’s important to look back to the beginning. Even though Steph Curry lit the NCAA up as a Freshman at Davidson, he didn’t truly burst onto the national scene until he poured in 133 points in four tournament games as the Wildcats nearly made the Final Four. Curry came back for his Junior season, and had he come back for his Senior year he would have had an outside shot of breaking Pete Maravich‘s all-time college scoring record. But when Curry entered the 2009 Draft, the masses had decided this was not only a guy who had a chance to be a bonafide star, but he was one of the few amateur athletes we truly wanted to see succeed, rather than secretly (or publicly) hope that they didn’t live up to the hype.

During Curry’s first few seasons there were occasional glimpses that he’d end up a bonafide star, though there was no suggestion that he could take over the NBA the way he has. As a young player Curry projected out more as something like the most prolific spot-up shooter you could imagine. If you paired him with a scorer that demanded double teams he’d be lethal, though he would need to be hid defensively and he didn’t fit the mold of a true Point Guard. There were justified concerns about his ankles, but even those worries were slightly overblown (Curry missed 40 games his third season in the league, but in his other six years in the league he’s missed only 21 games).

When Curry and the Warriors began their ascent during the 2012-13 season, we started to see what we thought was the best case scenario for Curry’s career. Curry was flawed for sure: he was turnover prone, nothing more than an average defensive player and it was still an uncertainty as to whether he could score efficiently anywhere other than behind the three-point line. But those glimpses fans saw during his first three seasons were now the norm, and we, as a fanbase, ate that shit up. When Steph was snubbed from the All-Star Game in 2013 there was a widespread outcry of dissatisfaction. How could you leave the most exciting young player in the NBA out of this fucking game, and put David Lee in instead??? You never see that because every player has his detractors. At that point, and for the next couple of years that followed, Curry didn’t. He was nearly universally revered because he was the most fun basketball player to pop up on a TV screen in ages. Night to night, no one had as high of an entertainment ceiling as Steph did. He was loved for this.

Then something happened that no one expected: Steph Curry transformed from NBA darling to legitimate MVP candidate. In 2014-15 Steph led the Golden State Warriors to 67 wins and he was rightfully awarded the league’s MVP. A month and a half after Steph won the MVP the Warriors capped off a fairy tale season with the franchise’s first NBA Title in 40 years. Amazingly, the Warriors won a championship that was built on Curry’s most elite skill (three-point shooting) and his infectiously jovial personality.

Then something happened that still isn’t completely understood or appreciated, simply because it’s difficult to fully comprehend what the hell happened: Steph Curry transformed from NBA MVP to something bigger than that. Curry became a living, breathing, walking, talking NBA revolution. Steph Curry has changed the way basketball is played and thought about. He has obliterated every relevant single season three-point shooting record conceivable (my favorite: Steph owns the record for most games with 3, 4, 5, 6, 7, 8, 9, 10 and 11 three-pointers in a single season), and someday he’ll own every career record. He transformed into the most lethal late game scoring option of the late twenty years (this isn’t hyperbole … no player since 1996 has scored more points per 48 minutes in the 4th quarter in a season than Curry did in the 2015-16 season). He’s an offense all by himself, a magical creator of the kinds of moments and highlights we haven’t seen before. The mere threat of Curry’s long-range proficiency helped turn the Warriors into one of the most dynamic offenses in league history. Let me elaborate on that: 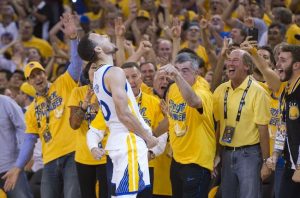 Let’s say that the Warriors were to secretly decide before a game that Steph Curry wouldn’t take a single shot for an entire game. Normally, having a player on the floor who can’t shoot, or wouldn’t shoot, is a major detriment. However, as long as the opposing team didn’t know of Curry’s intentions not to shoot the ball, his presence and gravitational pull on the floor is so profound, the Warriors offense would still be able to thrive at a workable level. Would they thrive like they did if Steph didn’t launch, and connect on, two or three of those bewildering “Wow that’s really deep — oh shit he made it” three’s? No, but as long as the defense didn’t know that Curry had no intention of shooting, the offense would still work.

As the Warriors rolled through the 2015-16 season, on their way to an NBA record 73 wins, we saw Curry’s popularity reach it’s apex, but we also began to see a subtle decline as well. Some hardened fans who haven’t been able to let go of ’90’s basketball claimed Curry wouldn’t have been able to hang in their day because of the physical nature of the game back then. Guys even older than that, all-time greats like Oscar Robertson and Walt Frazier voiced their borderline senile criticisms of Curry as well (my favorite was Oscar suggestion that to stop Curry you just needed to pick him up full court, as if Curry’s ball-handling wizardry would be ineffective 90 feet away from the basket). Some fans villainized Curry because he was achieving too much success too quick … he had shattered the expectations of many who held him in such high regard not so long ago, and fans turned on him. More than anything else, I just don’t think everyone was ready for the next phase of NBA basketball.

Curry became the face of the NBA overnight, but he’s different than those who have come before him. It’s been said before, but the league’s premier star had never been so slightly built. The league’s premier star had never looked like a baby-faced teenager whose ability to grow facial hair was a new development. People don’t always do well with change, and this was a big one. Curry skyrocketed to the top of the NBA, and I think some fans perceived it as if Steph had skipped steps. Even though most have crowned him the greatest shooter to ever live, there’s still this idea that Curry hasn’t mastered some of the basics of the game. He jumped past the old-school skills and ideals of basketball and turned the game into something that resembles NBA Jam.

The truth is, this is where we’ve still underrated Curry. People are still hung up on the fact that he’s not a true Point Guard, but he’s mastered all of the necessary skills the Point Guards of old had to master. He gets the Warriors offense into their sets, he’s an otherworldly ball-handler and a brilliant passer with terrific instincts and feel for the game. He was among the most efficient scorers from both mid-range and in the paint in the NBA, and no two areas of on the floor scream “Old School NBA” than mid-range and in the paint. Just because Curry isn’t backing down smaller guards, hitting turnaround jumpers from the elbow or putting guys on posters at the rim doesn’t mean he’s less effective; he’s the most creative scorer around the basket in the NBA, able to finish from inconceivable angles over defenders that are over half a foot taller than him. You couldn’t call Steph a minus-defender anymore. His cause was definitely helped by the presence of truly elite defenders, but Steph was up for the challenge of defending any elite scoring Point Guard you threw at him. Steph Curry may be the face of the new NBA, but he’s doing all of the stuff that the old-school fans loved too.

Back in 2010 I bet my friend Collin Stucko $10 that Stephen Curry would be a top five point guard in the league someday. Did I fully expect it to happen? Not fully. Like I said, there were glimpses his Rookie year that he could improve, but I never saw his climb to the top of the NBA, or his unexpected influence on how basketball would be played. More than anything else, I wanted to it to happen. I wanted Steph to get there. I knew the league would be more fun if Steph Curry was one of it’s top players. I’m inclined to believe many people would have had the same stance I did back then. If you did, and you’re now one who is hoping Steph falls off from the top, I encourage you to try to remember what made you enjoy the Stephen Curry experience in the first place, and then realize that the only thing that has changed is that it’s more delightful than we ever could have imagined.