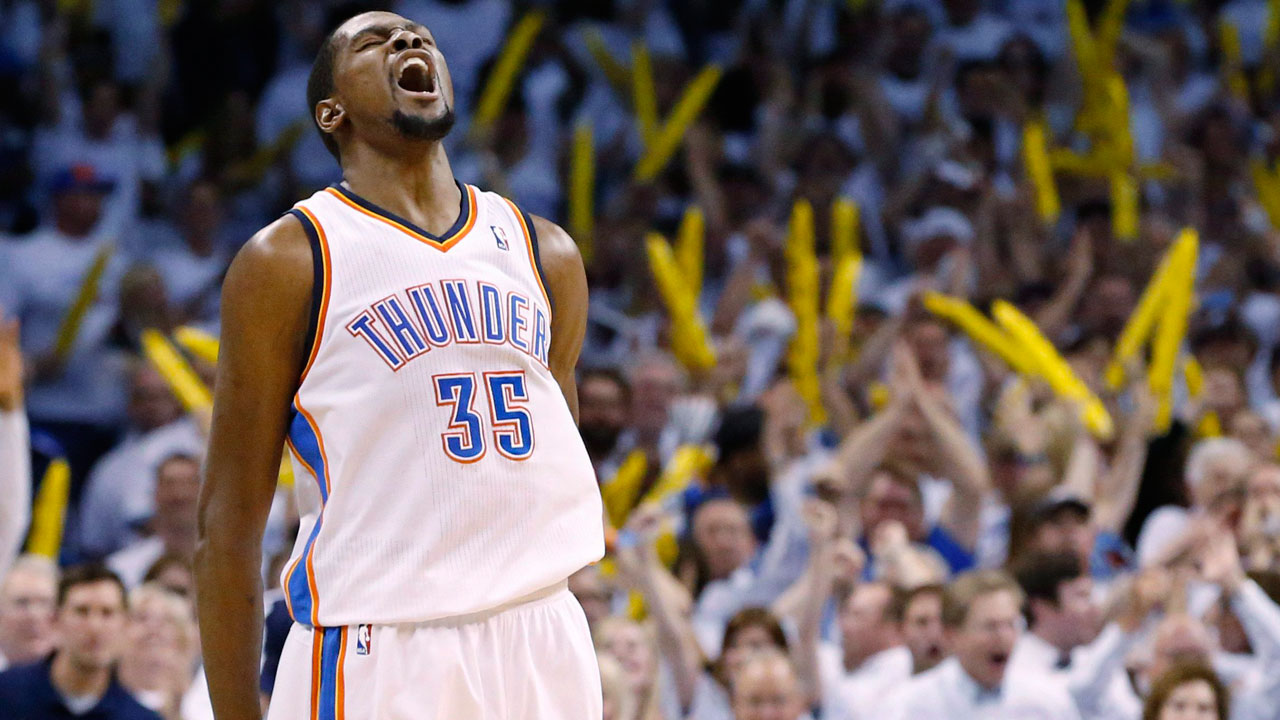 There is certainly no need for any sort of column gimmick to add some spice to the story of Kevin Durant. By nearly any calculation, Durant is already among the all-time greats to ever play in the NBA, and startlingly, he’s barely 28 years old. He’s on pace to smash handfuls of scoring and shooting records, and now a member of the most stacked (on paper) superteam of the modern of professional basketball, it’s almost inconceivable that Durant won’t add a few championship rings to an already remarkable resume. You know all of this.

Still, I’m compelled to use Durant, and more appropriately his entrance into the NBA, as a device to tell a more overarching story that focuses on the evolution of the NBA. If you’ve been paying attention throughout this countdown, you’ll know that a key theme I’ve touched on more than once is how drastically different the league as a whole is in 2016 in comparison to what the league was like in 2000.

Durant’s entrance into the league is well-documented. The 2007 NBA Draft was and still is considered one of the most polarizing in league history, in large part because the top two prospects were polar opposites. The skinny and high-scoring Durant was a natural foil for Ohio State’s Greg Oden, a mammoth Center that most pundits claimed was the next David Robinson or Bill Russell (though I’m convinced any and all Russell comparisons were made mainly because Greg Oden looked like a 65-year-old man). Despite altogether different skillsets, you couldn’t pick a one-two in any Draft in the 21st Century that had as much upside heading into the league as Oden and Durant did. What nobody realized at the time was the Oden/Durant pair represented the past and future of the way basketball at the highest professional level would be played.

In 2007 the NBA was at a turning point in terms of the stylistic nature of the game. At that point in time, there were only a few teams that were fully embracing the pace and space aspects of the international game, a style of play that was without question much more aesthetically pleasing than the eyesore that was iso-heavy big-ball on the 90’s and early 00’s. Still, in 2007 there were suggestions that the way teams like the Phoenix Suns and Golden State Warriors were playing was nothing more than a gimmick; a means of combating teams with superior big men. It was unknown if you could win in the Playoffs if you weren’t playing two traditional big men or at least dumping it down on the block to a dominant big, and the postseason dominance of teams that played traditionally (the Lakers and Heat with Shaq, the Pistons with the two Wallace’s, the Spurs with Tim Duncan) made it hard to see an avenue where spacing and shooting and skill-players would trump size.

Had Durant and Oden come along five years later I’m confident that any team would have seen the multidimensionality of Durant’s game and collectively decided he was the undisputed #1 prospect in the draft over Oden, a behemoth whose skillset was awfully one-sided. Oden’s post-game was O.K., but he wasn’t exactly Hakeem Olajuwon on the block. He projected to be an elite defender, rebounder and rim protector, but Oden’s ceiling wasn’t nearly as high as Durant’s. This was the M.O. in 2007 though; Oden, despite his injury concerns, was deemed to be a safer pick than Durant at No. 1.

You could talk yourself into Durant averaging 30 points per game, but it was a worry in the minds of some that he’d get bullied by bigger wings and forwards and never be able to adjust to the physical nature of the game. For the record, I was always on Team Durant. I don’t think I’ve ever watched more college basketball than I did during the 2006-07 season, so I caught plenty of both Oden and Durant. I was absolutely enamored by Durant at Texas, so much so that I bought a Kevin Durant Seattle SuperSonics jersey immediately after he was drafted. I was absolutely certain Durant would end up a star in the NBA. Oden? I could see it, but there were very few times when Oden felt like a sure-thing.

When the Blazers took Oden 1st overall it was almost universally agreed that it was the right move, only now we know it was a historic misstep and a failure to realize the direction the league would be heading over the next decade. Of course, it wouldn’t look so bad if Oden were able to stay healthy (Oden’s per 36 minute averages during his short-lived tenure as a Blazer are encouraging … but fuck the fact that he played only 82 games in a Blazers uniform is depressing), but we now know Durant was the indisputably the right pick.

Durant fell to Seattle (soon to be Oklahoma City) at No. 2 and the rest was history. Durant led the league in scoring three years in a row before his 24th birthday. He holds the post NBA/ABA merger record for most consecutive 25-point games with 41 in a row (MJ reached 40 twice, and the next longest streaks are Iverson with 27, LeBron with 21, McGrady with 20 and Kobe with 19). He’s a one-time member of the very exclusive 50-40-90 Club (looking at field goal, three point and free throw percentages) and he’s flirting with those marks for his career (he’s at 48-38-88). And incredibly, all of those distinctions don’t properly illustrate how prolific he’s been.

Durant turned out to be a the most effortless scoring wing of the 21st Century. The package of offensive skills he possesses is borderline incomprehensible. No forward has ever had the combination of handles and jumper that Durant has. His crossover is blisteringly quick and his overall arsenal of dribble combos is one that few guards have. He can leave any defender in his dust with a ridiculously quick first step and comically long strides on the way to the hoop, and once he arrives at the rim Durant vaporizes defenders who contest him there. KD is rarely touted for his athleticism, but there are very few guys who have a better catalog of in-game posterizations than Durant does.

Defending any guy with that kind of off the dribble game is a nearly impossible task. When you factor in Durant’s shooting chops you can’t do much else than raise your hands in the air and ponder what else could be done. Durant’s a legitimate seven-footer, so thinking that you can get a decent contest on his jumper is laughable. He can shoot over anyone and hit three’s with shocking ease and in time he even added a workable post-game. Basically, he’s perfected the art of scoring. That’s what Portland missed out on.

KD flashed that potential in the NBA right away. He put up 20 points per game as a Rookie, increased that number to 25 in year two, and in his third season he cracked 30 points per game for the first time in his career. By 2010, when Durant led Team USA to a FIBA Championship and looked miles ahead of every other player on that United States team, it was crystal clear that Durant was the future of the league, and amazingly, he still hadn’t reached his full potential (I say “still” more so because it’s hard to imagine a guy who was putting up thirty per game and devastating opponents in crunch time could get so much better, but then again, Durant was barely drinking age at this point).

Durant and the Thunder broke through ahead of schedule in 2012. The Thunder climbed out of a 2-0 hole in the Conference Finals against the seemingly unbeatable San Antonio Spurs, and Durant was the catalyst. Even after the Thunder bowed out to Miami in five games in the NBA Finals, it felt like OKC would own the next decade. Westbrook and Harden were overqualified second and third options and Durant was sensational in the postseason. In those last two rounds against Miami and San Antonio, he put up 30 points on 54 percent shooting 7 rebounds and 4 assists per game. He had firmly established himself as the second best player in the NBA, and one more time, he was only 23 years old. 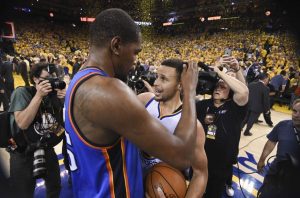 OKC’s dynasty didn’t come to fruition. Harden was traded before the 2012-13 season. Durant and Westbrook would each miss portions of seasons to come. More recently, Oklahoma City blew a 3-1 lead in the Western Conference Finals against the Golden State Warriors. It’s an anomaly that Durant didn’t win a title as a member of the Thunder. Dudes who were that good win championships. That’s just the way it works historically. Durant will have his chance as a member of the Warriors (if the Warriors don’t win a title with Durant it will be more than just an anomaly … it will be a sign of the apocalypse). Maybe more importantly, for the first time in his career, Durant’s potential will be fully realized in Golden State.

The Warriors represent the zenith of the pace and space evolution in the NBA. The Dubs vaunted “Death Line-Up” is as close to a perfectly operating NBA offense as one could imagine, and the inclusion of Durant in place of Harrison Barnes melts the mind. We could squabble over positional definitions if you’d like, but as the tallest player on the floor for the Dubs, Durant will essentially be playing a small-ball center of sorts; this is the kind of idea teams should have been fantasizing about when evaluating Durant as a Freshman at Texas (and that type of fantasy wouldn’t have been too far-fetched since Durant was playing Center at Texas). Steve Kerr will find the ways to maximize Durant’s skillset both offensive and defensively, and it will be a treat to watch.

We’ve seen Durant score in bunches with stunning consistency and ease. We’ve seen him facilitate offenses as a point forward in OKC when Russell Westbrook was out injured. We’ve seen him terrorize opposing offenses as a defensive menace from time to time in the Playoff when D is dialed up. We’ve never seen all facets of Durant operating at one time, and that’s exactly what we’ll eventually see in Golden State. Buckle up.