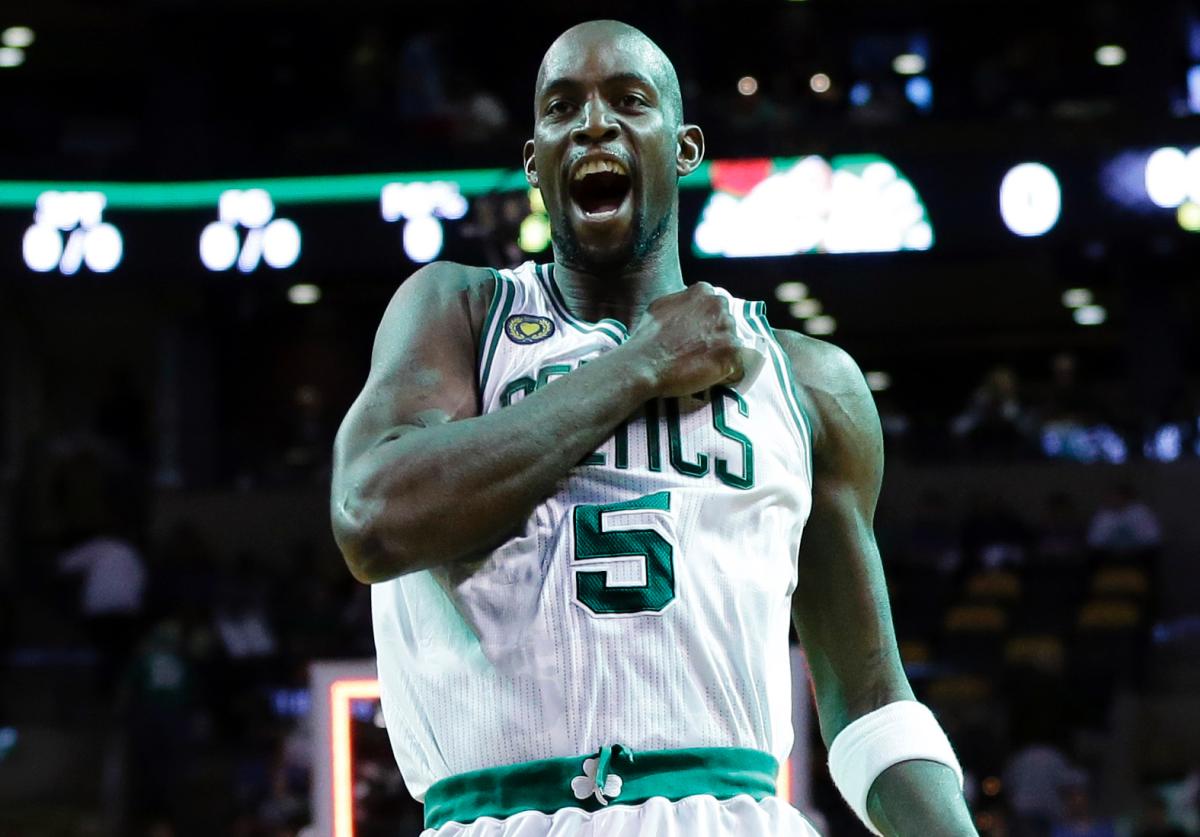 It’s weird to think about a basketball player’s career in the following terms: I’ve known Kevin Garnett for almost my entire life (a more accurate way to put this would be, I’ve known of Kevin Garnett for almost my entire life, since I never actually met the man). Kevin Garnett entered the NBA when I was three years old; now of course, I probably didn’t know who Kevin Garnett was when I was three years old because the Minnesota Timberwolves were never on television and NBA League Pass wasn’t invented yet (if KG were on a team that was frequently on television you better believe I would have known him … one of my favorite home videos is from 3rd birthday party, where my dad asks me to name the starting line-ups of the Chicago Bulls, Indiana Pacers, New York Knicks and Utah Jazz, and I don’t miss a beat).

Even though the ability to formulate my own thoughts and opinions on Garnett, or any NBA player for that matter, came years after I turned three years old, KG was one of the guys who stood out, for many reasons, from the time I could actually think beyond the “He’s good at basketball, I want his jersey” stage of being a basketball fan.

KG was the first player I remember thinking about as a guy who was surrounded by sub-par teammates, and how fundamentally unfair it was that he didn’t have any help because if he did have just one legitimately reliable second option, or even the right amount and sort of role players, while he was in his prime he probably could have made an NBA Finals, or at the very least made it past Round 2 more than once. Instead, KG was flanked by do-nothing Centers and wings that couldn’t consistently create shots for themselves.

One of the first times I remember thinking about this was during the 2003 Playoffs, when the Timberwolves supporting cast actually came through. In Game 3 of the 1st Round against the Los Angeles Lakers, KG fouled out early in overtime, and Troy Hudson carried Minnesota to a win down the stretch. Troy fucking Hudson. Meanwhile, Garnett was sitting on the bench looking like he was about the stroke out because Minnesota was surely about to lose home court advantage to the Lakers.

This was the case at every point in Garnett’s career until he landed in Boston. While I was doing research for the list I re-watched a Timberwolves/Kings Game 7 from the 2004 Playoffs (KG’s MVP season, a year which the Wolves won a franchise best 58 games and KG put up 24 points, 14 rebounds and 5 assists per game). I shit you not, at one point during this real-life elimination game the Wolves had Fred Hoiberg, Wally Szczerbiak, Trenton Hassell, Mark Madsen and Ervin “No Magic” Johnson on the floor together. It’s like the late Flip Saunders was trying to see how close he could get KG to committing a violent crime without it actually happening. And for the record, Minnesota won that game on the back of Garnett, who put together a 32 point, 21 rebounds, 4 steal, 5 block, 7 super-intense/almost-violent/game-changing emotional outburst masterpiece.

That brings me to my next point: KG was the first player I remember recognizing as someone who played hard all the time, and by “play hard” I mean, Oh Jesus, this guy’s a goddamn maniac! He might be legitimately unstable. Though it’s endearing to see any player care so much that it stands out in a league where every guy cares or else they wouldn’t be where they were, this trait landed KG in hot water from time to time; he had a habit of saying things that crossed lines (the Charlie Villanueva ordeal was the ugliest), got under opponents skin, truly pissed people off and made teammates cry (I’m looking at you Glen Davis!). That unbridled intensity brought KG to the party and it’s what his reputation was built on; if Garnett wasn’t wired the way he was he would just be another guy on the long list of players who had the physical gifts to own the league but couldn’t because they didn’t want it bad enough. So if he had to exchange words/mix it up with everyone he crossed paths with, then so be it.

Garnett’s hyper-competitiveness never took away from the kind of teammate he was. Even though KG most definitely had a screw loose, he never shit on teammates, bullied his way out of town, forgot that basketball was a team sport, or took his psycho act too far where guys stopped wanting to play with him. Garnett was a phenomenal teammate for the duration of his career; hard-working, competitive unselfish, motivating and by all accounts hilarious. He had it all. The intangibles matched what he brought on the court. 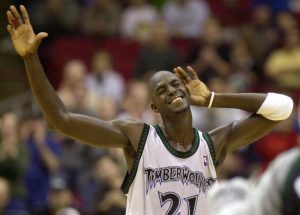 The third thing that stood out about Kevin Garnett was the fact that he was one of the first big guys that was being misused. In Minnesota KG was slated into that Power Forward spot, simply because he was too slender to play center. In reality, any progressive minded coach should have seen that unleashing Garnett as a Center would have hurried the small-ball movement, even before Phoenix had a chance to run teams off the floor playing Amare Stoudemire at Center. KG is one of the most uniquely skilled and athletic human beings to ever play basketball; built like Gumby but able to protect the rim and do things that few individuals over 7’0″ have ever been able to do. Rather than saddling Garnett with crappy Centers like Michael Olowokandi, Ervin Johnson and Rasho Nesterovic, the Wolves should have been playing KG at Center and forcing teams to adjust to a seven-foot freak show playing near the perimeter.

Even in Boston Garnett never got the small-ball Center look until it was his final season as a Celtic. In KG’s first four seasons in Boston he spent 89 percent of his minutes playing Power Forward (alongside Kendrick Perkins) per Basketball-Reference. Between 2002 and 2004, Garnett’s peak, he played 87 percent of his minutes at Power Forward. It feels like a missed opportunity. It feels like Garnett could have been used in more inventive ways, kinda like how Golden State uses Draymond Green (and probably how they will eventually use Kevin Durant in crunch-time) or how Dallas has used Dirk Nowitzki. Instead Garnett was trapped in unimaginative offensive systems with underwhelming teammates for far too long.

There’s a silver lining though: Garnett was traded to Boston in 2007 and less than a year later he was hollering “Anything is Possible!” at the top of his lungs after the Celtics had won their first NBA Championship since 1986. We never got to see prime-Garnett unleashed on a true championship contender, but slightly post-prime KG was still a guy who deserved to win a title and he was still Boston’s best player. I don’t want to think what the narrative of Garnett’s career would be like if he never got a championship. We’d probably never fully appreciate him for what he brought to the table … edge, heart, an ungodly combination of skill and will, incredible soundbites and a lifetime of bizarre and memorable anecdotes about what an unusual character he was.

Garnett announced his retirement a little over a month ago, and now there’s something else about him that stands out. Sure, it’s weird to think about how KG has been around in the NBA for nearly all of my twenty-four and a half years on planet earth, but it’s even weirder to think that twenty-one of Garnett’s 40 years have been spent in the NBA. For over half of his life so far Kevin Garnett gave all of himself to pro basketball. That notion, for a variety of reasons, is hard to wrap my head around. But I guess KG was right; anything is possible.