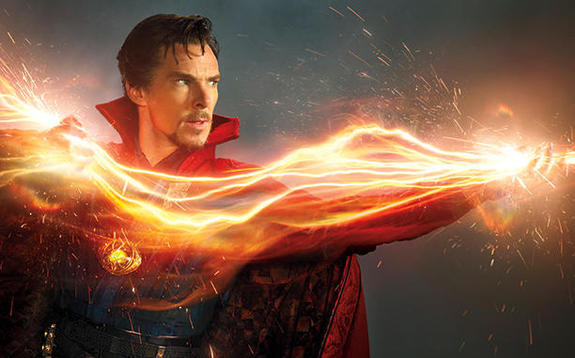 Marvel introduces the mystic arts to their cinematic universe in the form of Doctor Strange. Dr. Stephen Vincent Strange is an arrogant, yet talented, neurosurgeon that experiences a terrible accident, leaving him with damaged hands. In his journey to heal them, Dr. Strange is drawn into a world of magic by meeting the Ancient One. Benedict Cumberbatch is expertly casted as the title character, and he is joined by a group of very gifted actors, including Rachel McAdams, Chiwetel Ejiofor, Tilda Swinton, and Mads Mikkelsen.

Scott Derrickson is in the director’s chair for this trip, and he makes Doctor Strange stand out by creating psychedelic visuals for the audience to devour. Derrickson has a background in Horror and Sci-Fi films, and his work with the unusual helps him greatly in dealing with the M.C. Escher inspired, shape-shifting magic of Doctor Strange. There are parts of the film where it feels like Inception and Fantasia had a baby, and that baby is on a multi-dimensional acid trip. It’s really a sight to behold, and lends itself well to the 3D conversion, unlike most movies.

Beneath the wonderful aesthetics, there is a basic origin story that’s very familiar. It closely follows the beats of Tony Stark’s beginnings, and does nothing new with that journey. Along the way, there’s also quite a bit of expository dialogue. Not too many people are very familiar with this character and his world of magic, so some of it is necessary, but there are opportunities where they can show rather than tell. Despite the familiar storyline and some scenes where the dialogue seems stuffed, the cast bring its A game.

Benedict Cumberbatch as Doctor Strange is another inspired casting decision from Marvel Studios. Doctor Strange starts off as this arrogant neurosurgeon that’s more concerned with his record than actually helping people. Through his journey to find a cure for his damaged hands, he humbles himself when he starts to train with The Ancient One, played by Tilda Swinton. Cumberbatch takes care of the dramatic scenes with a gravitas that’s near flawless, but he also has the ability to be humorous, both with quips and physical comedy. There are some heroic parts in the film, like Doctor Strange’s realization of spiritual power; however, some of them are overshadowed by the humor, which sometimes dilutes an epic moment. Nevertheless, Cumberbatch puts forth a valiant, charismatic performance.

Rachel McAdams plays Christine, the sort-of love interest, and acts opposite Cumberbatch very well. Their scenes right after Doctor Strange suffers from his car accident are intense and allow us to truly care for their characters throughout the story. Chiwetel Ejiofor, as the loyal Baron Mordo, is also a standout. Mordo is a character that’s significantly affected by secrets that the Ancient One holds, diverting his path to one of vengeance. The Ancient One, played by Tilda Swinton, is the mentor to Doctor Strange, and she’s interesting enough, even though we never learn too much about her. Then there’s the villain of the film, Kaecilius, played by the talented Mads Mikkelsen. Unfortunately, he’s just another thinly written bad guy in a Marvel film.

Doctor Strange is another mark in the win column for Marvel Studios. It’s one of the better origin story films that they’ve put out, even if it feels familiar, because of the hypnotic visuals and Benedict Cumberbatch’s exceptional performance. Although briefly, the film entices our yearning for confirmation that we are more than just physical beings, and that the spiritual world exists if only we can open our minds to it. This film kicks open the door to alternate realities through a spiritual superhero, which extends the imaginative possibilities of stories to come.