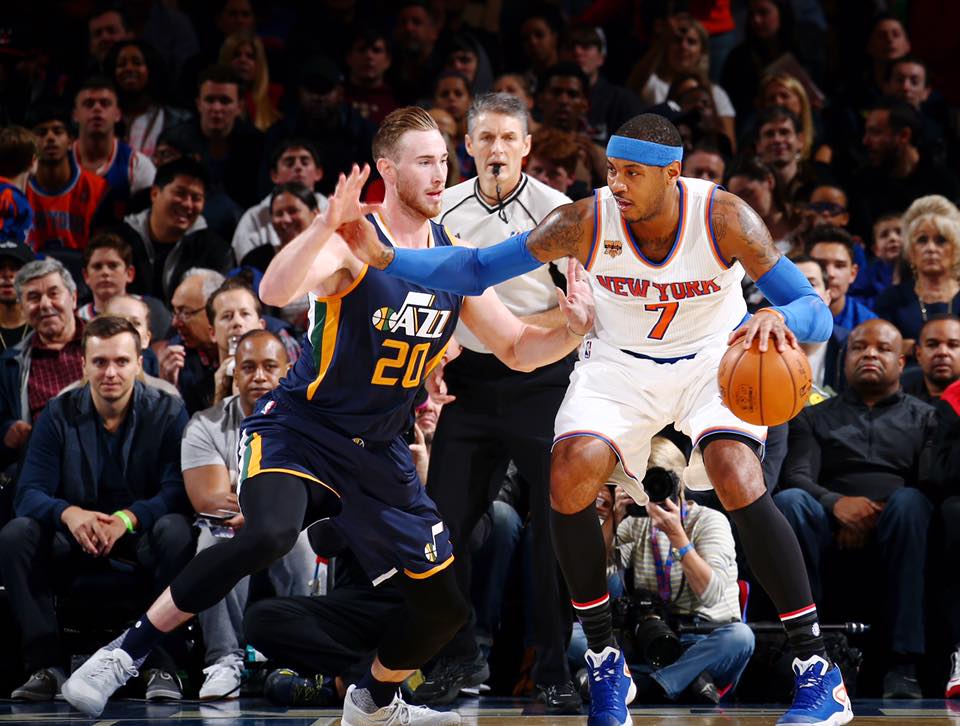 Martin Luther King Day has become the NBA’s biggest day of the regular season outside of Christmas Day and Opening Night. With four games on the national schedule and five others available if you’re an NBA League Pass subscriber, I’m left with plenty of questions (and probable answers) for all games on the schedule.

–Which backcourt gets the nod: Damian Lillard and C.J. McCollum or John Wall and Bradley Beal?

Three months ago I would have gone with Lillard and McCollum and not thought twice about it. Now I at least have to think twice, maybe three times about it. Both duos are saddled by subpar supporting casts and will spend the next three months fighting for Playoff spots right down to the wire. As much as people love talking about Bradley Beal’s breakout season, not enough credit heading the direction of C.J. McCollum despite the fact that he’s turned into one of the most ridiculously efficient perimeter scoring weapons in the league in just two years. Seriously, two years ago McCollum averaged seven points per game. This year: 24 points and 48-45-90 shooting splits … that shit is right on par with what Stephen Curry, Kawhi Leonard and Kyrie Irving are doing.

The Wall/Lillard debate is one worth having. They’re both in the midst of seasons where they are scoring and shooting more than ever, so that’s a wash. Wall’s a better distributor and when he’s engaged he’s miles better than Dame is defensively. Lillard is a more natural scorer, but Wall’s on Lillard’s corner this year in terms of crunch-time scoring, a new wrinkle for Wall. I guess it all comes down to personal preference. I like McCollum a whole lot more than I do Beal, and struggle to make up my mind between Wall and Lillard. Slight edge to the Blazers.

–Shouldn’t the league try to flex this game onto NBA TV?

It definitely should be higher on Adam Silver’s list of priorities than “Get an NBA Team in Mexico” and “Make sure Zaza Pachulia doesn’t end up in the All-Star Game.” Just write a clause into the NBA’s scheduling and television policy that calls for Giannis Antetokounmpo and Joel Embiid being flexed onto NBA TV any time they are playing. Do the right thing Adam.

–Will both, either, or neither of these teams make the Playoffs?

I’ll say one of the two will, but I’ll remain non-committal as to which of the two it will be. Both teams are oddly constructed and feel like the kind of team you end up drafting if you ever did the franchise mode in NBA 2K and do a fantasy draft before the season. It’s like the Pelicans had the third pick, drafted Anthony Davis, then had to wait fifty-something more picks until they could make their next selection and desperately had to talk themselves into Jrue Holiday being a worthy second option and then they realized their team was gonna stink, but you can’t just quit the game and start the draft over again because it’s real life.

For the Pacers, it would be like deciding beforehand draft a team that could get up and down the floor and put points on the board and on paper the guys you picked looked like a roster that could do just that. But then you get a peak at your team ratings before hand and your offense rating is like 80 and somehow your defense is better than your offense and then you get into the game and realize there is no five-man unit that actually works all that well, but you can’t just quit the game and start over because it’s real life.

–Wouldn’t Hornets/Celtics be a delightful 1st Round Playoff series?

Oh, it would be a spectacular series and not just because of the sure-to-be-legendary Isaiah Thomas/Kemba Walker crunch-time battle. Let’s go ahead and pencil this into the 3/6 match-up, and while we’re at it, let’s lock in Cavaliers/Knicks, Raptors/Bulls and Bucks/Hawks for those other three 1st Round series in the Eastern Conference, and then we’re all set.

–Can Devin Booker continue his hot streak against the best defense in the NBA?

The second-year Suns guard is averaging 28 points per game in six January games and he’s scored 39 points in each of the last two games against Dallas (not all that impressive) and San Antonio (incredibly impressive). The Jazz have the best defensive rating in the NBA and have held Booker to 20 and 21 points in their first two wins against the Suns this season. I don’t like the chances of Booker’s hot streak continuing, but I do like the Suns outlook moving forward.

–Is the Carmelo Anthony trade chatter worth getting excited about?

Up until about 7 pm on Sunday, I would have advised not to get too riled up about it. Despite the needling comments from Phil Jackson, the boos the MSG crowd serenaded Melo with after shooting an airball against the Bulls last week and the locker room tirade he supposedly went on after the Knicks blew a game against Philadelphia, Melo could still put the kibosh on any deal the Knicks could possibly want to make to move him. Then, I saw this Frank Isola gem making the rounds on Twitter:

Carmelo: "If they feel like my time in New York is over I guess that’s a conversation we should have."

And that caught my attention. Now I feel like we need to go back to the drawing board and re-evaluate everything. The Knicks and Melo have one month to have this conversation, and if they don’t then both sides will regret it. It’s time for Melo to hand the Knicks a list of teams he would waive his No Trade Clause for. It’s time for the Knicks to realize that they fudged up back in 2011 when they gutted their roster to trade for Melo when they could have just waited six months and signed him in free agency, and then come to another realization that maybe they shouldn’t have given a max deal with a No Trade Clause to a “star” player on the wrong side of thirty. Give me three or four weeks to find a deal for the Knicks and Melo, and if they haven’t done the right thing yet I’ll be sure to include it in my highly anticipated Second Annual 30-Team NBA Trade Deadline Challenge.

–When will people learn how good Nikola Jokic is?

Hopefully before the Knicks trade Melo goes down, but I wouldn’t count on that. The big Serbian is averaging 18 points on 65% shooting, 9 rebounds and 5 assists per game since the beginning of December, and there is a particular pizzazz to most of those assists. If you aren’t haven’t seen Jokic play, pull up YouTube and admire the man’s work. Then familiarize yourself with the pronunciation of his last name. That’s a soft J back there folks.

–Where do Russell Westbrook and Chris Paul land in the most recent version of the Point Guard Power Rankings?

Oh man, I can’t believe I’m putting myself on the spot like this. Alright let’s start at the back end of the Top 12.

Conley and Hill are cut from the same cloth: perennially underrated to the point where we talk about how they aren’t really underrated, but in all actuality they are still underrated because the only time anyone ever says anything about them is when they are saying “He isn’t underrated anymore because everyone says he’s underrated.” My head hurts. Kemba’s case is slightly different, but for the season he’s having (23 points, 4 rebounds, 5 dimes per night with 46-41-83 shooting splits) he’s equally as underrated. Let’s move on before I have to type “underrated” one more time.

9a: John Wall
9b: Damian Lillard

I still haven’t made up my mind. Nobody gets to be #8. Sorry fellas.

As a collective NBA fanbase, we need to come together to talk about three things more than we already do. First, Isaiah Thomas has turned himself into the best under-six-foot scorer in NBA history. That’s rather significant. Second, how the hell did a dude who could put the ball in the basket like this slip to the very end of the second round? He’s quickly climbing the list of best 2nd Round Draft Picks ever. And third: did y’all know the Kings traded IT to the Phoenix Suns for Alex Oriakhi and a trade exception? I’m not messing around.

Just in case there’s any misunderstanding, Lowry is the best player on the Toronto and the most deserving guard in the Eastern Conference of starting in the All-Star Game. Aside from a fully-engaged Chris Paul, he’s probably the best defensive guard on the list and as a Cavs fan, I pray that DeRozan, not Lowry, gets the late game shots anytime the Raptors and Cavaliers are going down to the wire. Great, great player in the midst of an exceptional season. Not better than the next five guys.

We can’t just ignore the fact that he’s playing alongside the best basketball player in the world. Kyrie is #5 right now, except for in the last minute of a tight game. Then he’s probably #1 on this list.

I don’t at all feel great about this. For what it’s worth, I think Harden is the MVP of the league thus far and Russ has been the most fun player to watch this season on a night to night basis. That kind of stuff means something. Chris Paul will forever be what I believe a perfect Point Guard is, and Steph, a year removed from setting the NBA on fire, is putting up numbers that are on par with his first MVP season. I didn’t want to overreact and push Steph too far down the list.

–Will this game tell us anything about the assumed and highly anticipated Finals rematch in June?

Nope. Nothing. Again, there is no need to overreact. Last year Golden State won their first regular season meeting against Cleveland by 6 points, then won by 34 when they met again on Martin Luther King Day. You know how the rest of the story goes. This game tells us nothing. Just sit back and enjoy it. See ya in June.