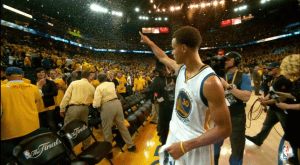 Stephen Curry became the latest athlete to weigh in on President Trump when he took issue with comments made about the president by the chief executive of his primary sponsor, Under Armour.

In an interview with CNBC on Tuesday, Under Armour’s Kevin Plank described Trump as “a real asset” to the country.

After a discussion between Curry and Plank, Under Armour released a statement Wednesday in an effort to clarify its chief executive’s remarks. The statement said that Plank’s comments to CNBC were about Trump’s business policies, not his social viewpoints.

“We engage in policy, not politics,” the statement read. “We believe in advocating for fair trade, an inclusive immigration policy that welcomes the best and the brightest and those seeking opportunity in the great tradition of our country, and tax reform that drives hiring to help create new jobs globally, across America and in Baltimore,” the company’s headquarters.

The company’s response seemed to satisfy Curry, who endorsed the Democratic nominee Hillary Clinton in the presidential election. Nevertheless, Curry, who is under contract with Under Armour through 2024, signaled his willingness to leave a company that did not align with his values by saying, “There is no amount of money, there is no platform I wouldn’t jump off, if it wasn’t in line with who I am.” The New York Times