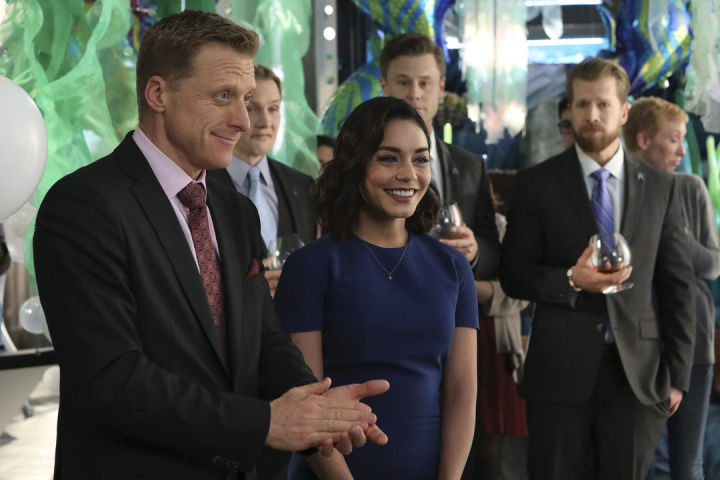 The third episode of Powerless showed much more potential than the previous two episodes. The plots were exactly what this show should be doing. It’s still light on laughs. But, far more jokes landed than we’ve seen previously. Ron Funches continues to be a comedic gift. His chemistry with Danny Pudi is fantastic.

In the main storyline, Emily Locke teamed up with Van Wayne. They tried to land a big account from Atlantis. This combined the whimsical with the mundane perfectly. I loved the detail that Ron is from Atlantis. However, it did make it confusing when Emily and Van were scrambling to learn about Atlantis customs. Why didn’t they just consult Ron? This is an example of how clunky the plotting on Powerless can be.

A first act in which Van loses an account belonging to the Kane’s showed that Powerless is capable of making the kinds of subtle references fans are hoping for. The line about giving him a break because their families are friends worked without being at all heavy-handed.

In the subplot, Ron, Teddy and Jackie wondered if a new guy is actually a superhero. This had some fun bits, including the episode’s best joke in which Ron says he believes that “Bruce Wayne is The Flash and Stephen Baldwin is actually a character played by Alec Baldwin.” The ending in which Wendy simply hit him with a chair and then declared him not a superhero when he buckled over was great.

Van is still a bit too cartoonish for anyone to really care about him, but this episode took some steps towards humanizing him. The running gag where he complained about how often Emily talks about her father was great, although they did hit it a couple times too many. Plus, it all wrapped up with Van and Emily singing a duet together, which I’ll always be in favor of.