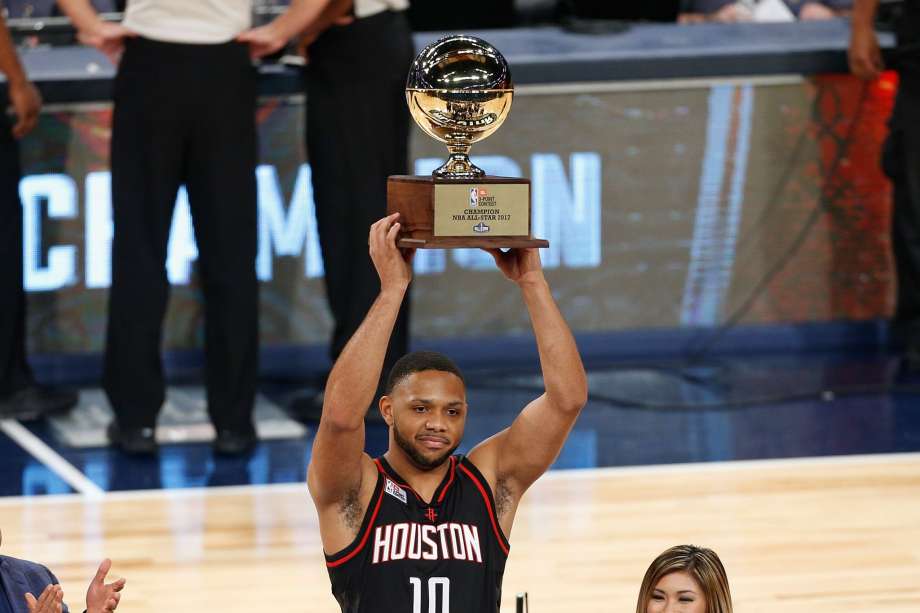 While the NBA Three-Point Contest doesn’t give you the most glitz and glamour when it comes to the All-Star Weekend festivities, what it does provide is consistency. Year after year, we see some of the greatest shooters do what they do and compete, which is why the Three-Point Contest is extremely underrated.

This contest gave you a little bit of everything and definitely was the most competition of all the events. After the dust settled, though, it was Eric Gordon, oddly enough, who walked away with the trophy after winning his extra championship round, which hasn’t happened since the Kevin Love and Kevin Durant duel in 2012, against Kyrie Irving.

First Round
The first round actually gave many viewers a few surprises. Three of the first four contestants put up some good scores to set the pace. Kemba dropped 19, Kyrie followed that up with 20, and Gordon calmly scored 24. Klay Thompson, former reigning champ, and Nick Young came super close but couldn’t crack the top 3 since they only had 18. Wes Matthews, C.J. McCollum, and Kyle Lowry all nearly put everyone to sleep scoring 11, 10, and 9. Yes, Lowry had 9, you read that correctly. Like I said, a few surprises.

Championship Round
The championship round was set with Kemba Walker, Kyrie Irving, and Eric Gordon, in that order. Kemba literally came and went, only scoring 17. Kyrie came up next and dropped 20, moving him into first. Gordon was next and in truly dramatic fashion, ended up with 20. Gordon definitely had a chance to win in the championship round but he missed his last money ball and set the stage for a showdown with Kyrie Irving.

Overtime Round
In the extra round, Kyrie came out hot from the first corner and found his stroke with the money ball rack but that was it. Kyrie definitely looked like he ran out of steam midway through and ended up with a score of 18. Eric Gordon came up and ended the contest, needing only 4 racks to do it. After missing his first 3 shots, Gordon went on to make 11/12 shots, including 4/5 from his money ball rack. By the time he finished rack 3 he had 17 already, he faded a little towards the end and only ended up with 21 to take home the trophy, but it definitely was a good showing.

Though the favorite got bounced early, and Steph Curry was not competing, we still got a great show. Eric Gordon, formerly a member of the Pelicans, took home the trophy, becoming the first player in Rockets franchise history to win the Three-Point Contest. This has been a resurgent season for Eric Gordon and this definitely was just another stop on his redemption tour. Expect more big things from him in the second half of the season as he tries to secure the Sixth Man of the Year Award.