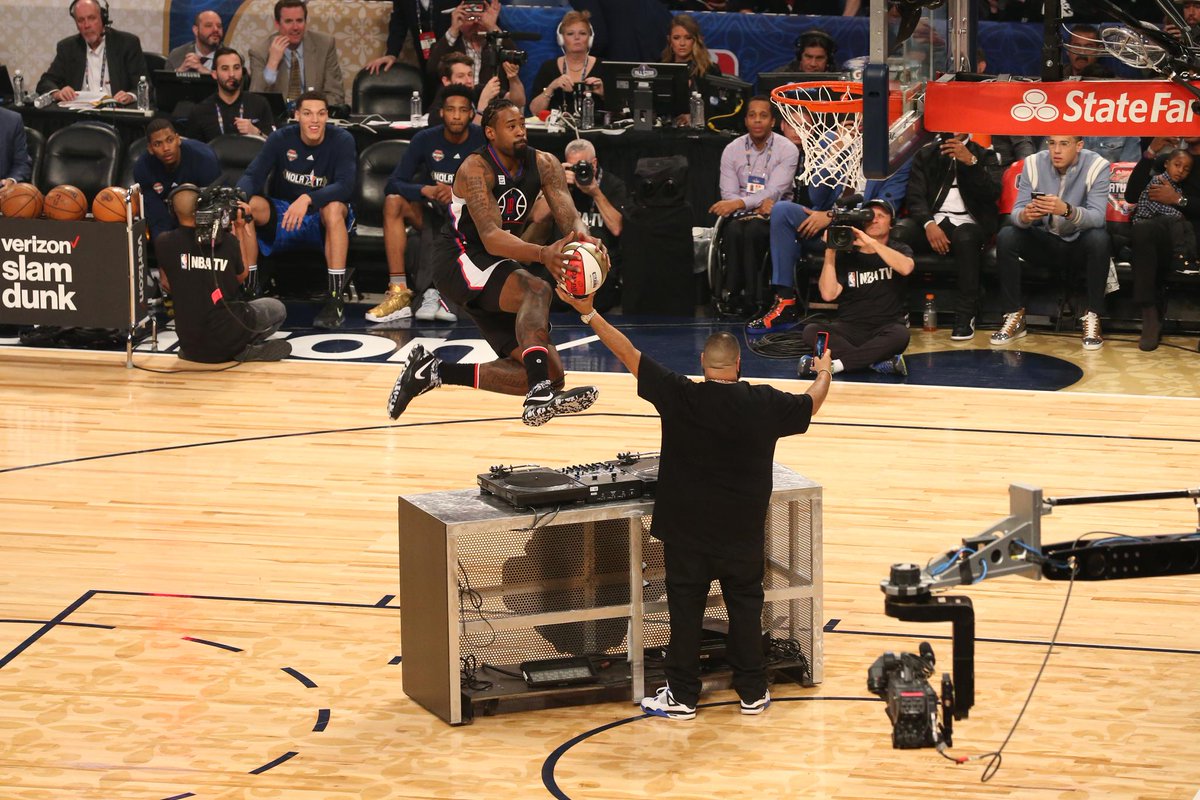 So I’m gonna pull a Charles Barkley and shit on the current NBA product for a bit. I hate to be that guy, but I took on the task of recapping the Doritos Verizon Slam Dunk Contest, and to be blunt, it wasn’t very good. I can say this with complete confidence because over the last week and a half I’ve been re-watching all of the old Dunk Contest’s on YouTube because I expected one of two things to happen last night:

1: I expected that it was a possibility that Aaron Gordon could put on an absolute show, avenge his narrow defeat at the hands of Zach LaVine last year and put his name in the Dunk Contest G.O.A.T. conversation.

2: I expected that it was a possibility that DeAndre Jordan could win and enter the “Best Big Man to win a Dunk Contest” discussion.

Neither of those two things happened. DeAndre Jordan kicked the show off by dunking over DJ Khaled. I’m dead serious. Aaron Gordon had a drone descend from the rafters to assist him on an alley-oop, only Gordon missed the dunk multiple times before getting one to go down. I’m dead fucking serious. I mean really … could I make that stuff up?

Gordon and Jordan both failed to make the final round of the dunk contest. They were out-dunked by Derrick Jones Jr. (a dude who has five buckets in NBA action this year) and Glenn Robinson III (averaging 6 points per game this year). If you’re underwhelmed reading those names, well, we’re right on track. Jones and Robinson combined to dunk over something like 59 people in their eight combined dunks, and not a single one of them was remotely memorable or different than anything that has already been done. Robinson won, but that’s not the big takeaway of the night.

The NBA Slam Dunk Contest has a problem. This problem isn’t being able to stand in a single file line. Last night was the blueprint for Kindergarten teachers everywhere. Anyway, this is a problem that we as a collective fanbase momentarily forgot about last year during the LaVine/Gordon duel.

The NBA Slam Dunk Contest has relied too heavily on the overuse of props (people included) for far too long. It’s hard to figure out exactly when this problem started, but since it’s so easy to point the finger of blame at Dwight Howard for basically everything, I’ll blame Dwight for bastardizing the Dunk Contest with his ridiculous Superman shtick back in 2008. For the record, the Superman dunk was Dwight’s worst of the night, but it’s the one people remember because people are stupid. So maybe the fans are to blame.

We can continue to track this problem to the 2011 Dunk Contest when Blake famously dunked over a Kia (shout out to some not so subtle product placement) and defeated JaVale McGee in the final round. Much like Dwight’s Superman slam, Blake’s Kia dunk was his worst of the night. But at this point there was an unfortunate (and untrue) understanding that props were necessary for the Dunk Contest to be relevant again.

This isn’t the case. Not all of the old dunks hold up well now — there are some very simple Reverse Dunks in the early contests that don’t fit in at all nowadays — but the best straightforward dunks of the past are still remarkable many years later. And here’s the kicker: these dunkers apparently think that adding a some pizzazz to their dunks will help them stand out from the field, when in fact the overuse of outside help has made most modern dunkers hard to differentiate from one another. The guys who don’t try to go over the top with the pre-dunk theatrics are the ones that really stand out.

Larry Nance‘s shorts were so short and his legs were so long that it looked like he was about 13 feet tall, and normally tall dunkers are at a disadvantage, but when you have a 13-footer out there doing cradle dunks, it’s a sight to see.

Dominique Wilkins dunked like he hated the floor. He exploded so recklessly off the ground it was like he was trying to two-foot stomp through the hardwood. He also dunked like he hated the rim. It was as if the rim had offended him personally; like it was making fun of him for not being able to penetrate through the ground, and Nique decided it that kind of disrespect wouldn’t be tolerated.

Spud Webb was 5’7″ tall, 150 lbs. and was out there doing off-the-bounce 360’s like he was going through a lay-up line. I once dated a girl who was 2 inches taller than Spud Webb. That’s ridiculous. She wasn’t remotely similar to him in any other way.

Michael Jordan had an easily identifiable swagger (I suppose it was warranted) and though it will sound like a cliche at this point, he did seem to fly through the air at some points during some dunks. And MJ never used any sort of prop. Never did the two balls dunk. Never jumped over anyone. Never caught any alley-oop. He never even through an oop to himself. He was out there just dunking, and doing it really, really well.

Isaiah Rider got to wear those badass bright Blue and Green mid-90’s Timberwolves uniforms, so he should have gotten a 50 for every dunk just based on style alone.

Vince Carter put on the single greatest Dunk Contest performance ever in 2000; one so monumental that I remember exactly where I was sitting at my Grandma’s house watching it. He was Nique reincarnated, only with the swagger of MJ multiplied by 10.

Jason Richardson is my pick for most underrated Dunk Contest dunker ever; a legend of the era right before the Dunk Contest jumped the shark. He mastered the art of alley-ooping it to himself, and repeatedly found ways to do shit we hadn’t seen before. His off the glass through the legs dunk from 2004 remains one of the greatest Dunk Contest dunks ever, and the baseline alley-oop to himself that he reversed and brought through his legs isn’t far behind.

LaVine and Gordon gave us a glimpse of that kind of Dunk Contest brilliance last year, but this year we’ve regressed back to the sad norm. They say that sometimes less is more, and last night’s Dunk Contest had way too much shit going on that wasn’t dunking.