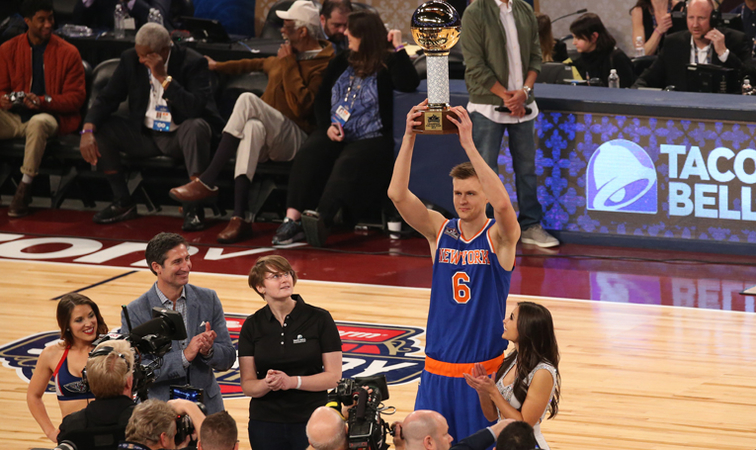 It’s no secret this season has been the highest form of garbage for the New York Knicks. Fans have had to watch Derrick Rose and Carmelo Anthony  freeze out Kristaps Porzingis late in games, Phil Jackson publicly come at Carmelo and James Dolan disrespect Charles Oakley. Then PorzinGOD lifted the fan base’s spirits.

The competition in this year’s NBA All-Star Weekend Skills Challenge was loaded with big men. Nikola Jokic was a popular pick to win the big man bracket with Anthony Davis and DeMarcus Cousins providing stiff competition. Porzingis opened up by narrowly escaping Boogie while Jokic easily silenced Davis. That set up a gauntlet for the title of best Euro big man.

For the guards things were much more mundane. It wasn’t a good showing for Kentucky alums as Devin Booker and John Wall were both handled swiftly. Isaiah Thomas–a vet in this specific event–slayed Booker with such ease he looked like he was just warming up. Wall is another veteran of the event, but has yet to win and Gordon Hayward made sure that trend continued. This is Hayward’s first introduction to the uber casual fans and he made it count by using his great asset (long range shooting) to take down Wall.

Hayward’s next opponent was his teammate IT and again Hayward was able to upset a vet thanks to his ability to hit that three. The inclusion of this three has proved to be the key factor in winning. That’s what made Jokic vs. Porzingis so intriguing. Both possess a similar versatile skill set, but Porzingis is the better three-point shooter, hitting on 38.4-percent.

Jokic kicked things off by telling Porzingis to get back, an amateur head game tactic. You can’t get inside God’s head Joker. In true New York fashion Porzingis gave him the “deadass?” hand gesture and proceeded to leave the Joker sucking wind. He dusted Jokic, threw a perfect chest pass and got up two threes before Jokic could even finish. Don’t fuck with Porzingis’ shine Joker, you will get embarrassed.

Porzingis carried that momentum over to the finals. Easily the best race of the night Hayward did everything he could to complete the improbable win. He shrewdly cut off Porzingis’ path but the petty move ended up backfiring as Porzingis’ lay up allowed for a better rebound which gave him the precious seconds to get down the court first and launch the three.

A couple things were accomplished with Porzingis’ win. One, big men have officially Deboed this event. Towns shocked Thomas last year, but this year nothing seemed odd about Porzingis winning. It’s clear the bigs are quickly becoming the premier players and evolving to the point it’s not even fair to have the guards compete against them. And most importantly the Knicks, for two straight nights, had something to be proud. How often can you say that? I haven’t seen Knicks Twitter this happy all season. God bless you PorzinGOD.