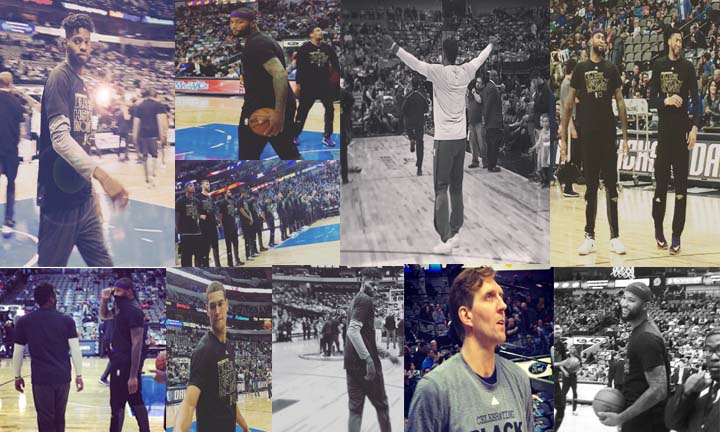 The energy inside the American Airlines Center on Saturday night felt warranted after so many months of wading in a stagnate lackluster cesspool of dismal grey suck. Particular events that unfolded before the 2016-17 NBA trade deadline felt their way onto the court as a brand new Dallas Mavericks team faced a brand new New Orleans Pelicans team.

Teams barely had time to recover from hearing the news that former Sacramento Kings All-Star DeMarcus Cousins was shipped off to join Anthony “The Brow” Davis in the Big Easy (for nothing but a half empty bottle of lube in return) before the trade deadline hit on Thursday. In the eyes of the NBA, every trade made after that apocalyptic KABLOOM could be rendered wan and left for dead in a shallow ditch.

Fans/media/skeptics of the Mavericks thought that.

Wake me up with a good deal please. I'm tired of thinking the mavs are playing checkers while the league is playing chess

There was no whisper of “perhaps” or “we might!” throughout the Metroplex – people knew better. Hopes of grandeur already flew too close to the sun, lost in a tetchy gamble that was always too good to be true every single fucking year so people knew better, even if it cost them their fandom and/or sanity.

The Mavericks front office had laid stagnant during the moments leading up to the trade deadline, hidden in the grass with that not-so-metaphorical snake Boogie once hid, waiting for the right moment. A moment that arrived mere hours before the deadline hit.

“It’s pretty clear that he’s going to help us,” Dallas head coach Rick Carlisle said following the Mavericks’ 96-83 win over a team who supposedly had omnipotent combination, to say the least. “The minutes are going to be there whether he starts or doesn’t start. The guys really loved playing with him tonight and really took to him.”

Wait… did the Mavs do something right during the trade deadline?

Noel, who suffered from injuries during his four years with Philadelphia, was apparently thrilled to learn of the trade and saw is as an opportunity to start anew. He ended up proving his joy on the court against the Pelicans by putting up nine points and 10 rebounds in 30 minutes off the bench.

Noel received a standing ovation when he was brought into the game during the first quarter.

“There’s a lot of love,” Noel said to the press following the win. “Getting [a standing ovation from the fans] in my first game here, that’s something I’m appreciative of. I’m going to work my butt off to please the fan base, and it felt great to get a win in my first game in a Maverick uniform.”

Noel brings a much needed balance to the Mavericks’ offense with his keen ability to roll hard to the rim.

“He helped us in a lot of ways,” Carlisle said of his newest player. “He had impact on offense – even situations where he wasn’t touching the ball with his rolls. I don’t know how many deflections he had. It really eases our front court rotation some.”

It also helps that the new “Fire and Ice” combo of Davis and Boogie blew chunks offensively on Saturday whenever Noel was on the floor.

This could be a sign of great things to come in Dallas.

But, alas, we’re trying not to get hopes up too much considering Dallas’ knack for obtaining the injury bug. Plus, rebuilding takes time, which is a mode that the Mavs are shifting to, but with the youth and freakish talent of the 22-year-old Noel (who has been compared to a young Tyson Chandler), it could be a mode that pays off more quickly than not.

Hopefully before Dirk Notwitzki actually retires (or breaks a hip, which ever comes first).