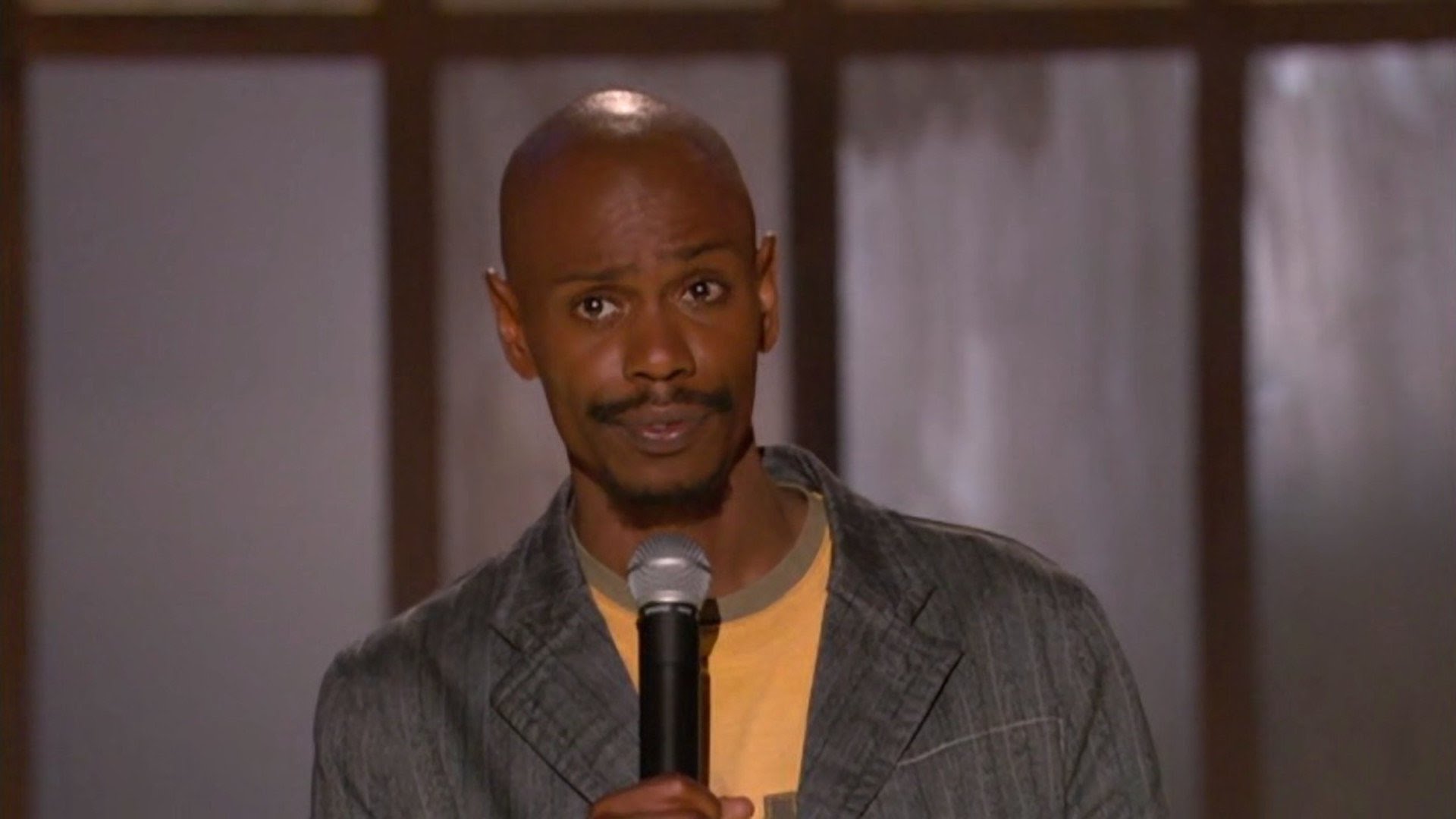 First of all, MASSIVE thanks to Hardwood and Hollywood, Frankie Lloyd, and Dennis Velasco. The completion of this list was arduous and the patience of everyone involved was absolutely necessary in making it happen. And most especially, I need to thank Tyler Birss, with whom this has been a join effort. There is no way this gets done without Tyler. And thanks to the readers for sticking with us while we finalize the Top 50 Comedians of All Time.

If Richard Prior is Bill Russell and George Carlin is Kareem-Abdul Jabbar, Dave Chappelle is Michael Jordan. Chappelle may not have the most points or rebounds in history. He may not even have the most championships. What he has is a universally recognized dominion over his industry that was so dramatic that it permeated nearly every aspect of American culture. In a “league” filled with some of the best talent stand-up comedy has ever seen, Dave Chappelle stood head and shoulders above the rest.

His penetrating insights into some of the most perplexing aspects of society could very easily have brought upon the kind of rage and cynicism seen in so many other comics. But somehow, Chappelle manages to dish out heavy critiques while maintaining a visage of positivity. Maybe more than any other comedian in history, his material is derived from empathy instead of otherism; the mocking of the “other.”

If there is a better stand-up special, beginning to end, than Killing Them Softly, I haven’t seen it. In fact, I’ve never seen a crowd react to live comedy the way that crowd did for that show, often erupting as if at a sporting event. For What It’s Worth is also in contention for a Top 10 special. I debated for a long time whether or not to include Chappelle’s Show since most of that qualifies as sketch comedy and not stand-up, but there is also plenty of the latter mixed in.

Much like his recent appearance on Saturday Night Live where he delivered one of the greatest opening monologues to any show in the last 25 years, it’s difficult to classify that as stand-up. But it serves as an eternal reminder that Chappelle is in a class of his own when it comes to standing on a stage with a mic in his hand.

Chappelle’s writing is sharp-witted and intelligent but not difficult to “get.” He can talk about all of the tropes (race relations, sex, drugs) without it ever feeling derivative or basic. He is inclusive rather than exclusive. His jokes aim to inspire empathy and often reach that level of “so real it’s almost not that funny anymore.” He holds up a mirror and asks us to really take a look. He is willing to challenge all ideologies through the disinfectant of humor, including his own and not just the one’s he doesn’t like.

This willingness to look inward instead of just outward is what makes his comedy so special and also almost certainly contributed to his feelings of isolation leading to some well publicized events, including his dramatic departure from Comedy Central.

Through this much discussed leaving of the scene, Chappelle never lost his crown. And now he is back. Will this be Michael Jordan playing for the Washington Wizards? Who knows. But so far in his career, Chappelle has never disappointed.

He may not have the overall quantity that some others on this list do, and he may not have changed the game quite as much as the Carlin’s and Prior’s of the world, but Dave Chappelle at his best – which is pretty much always — is simply the best.