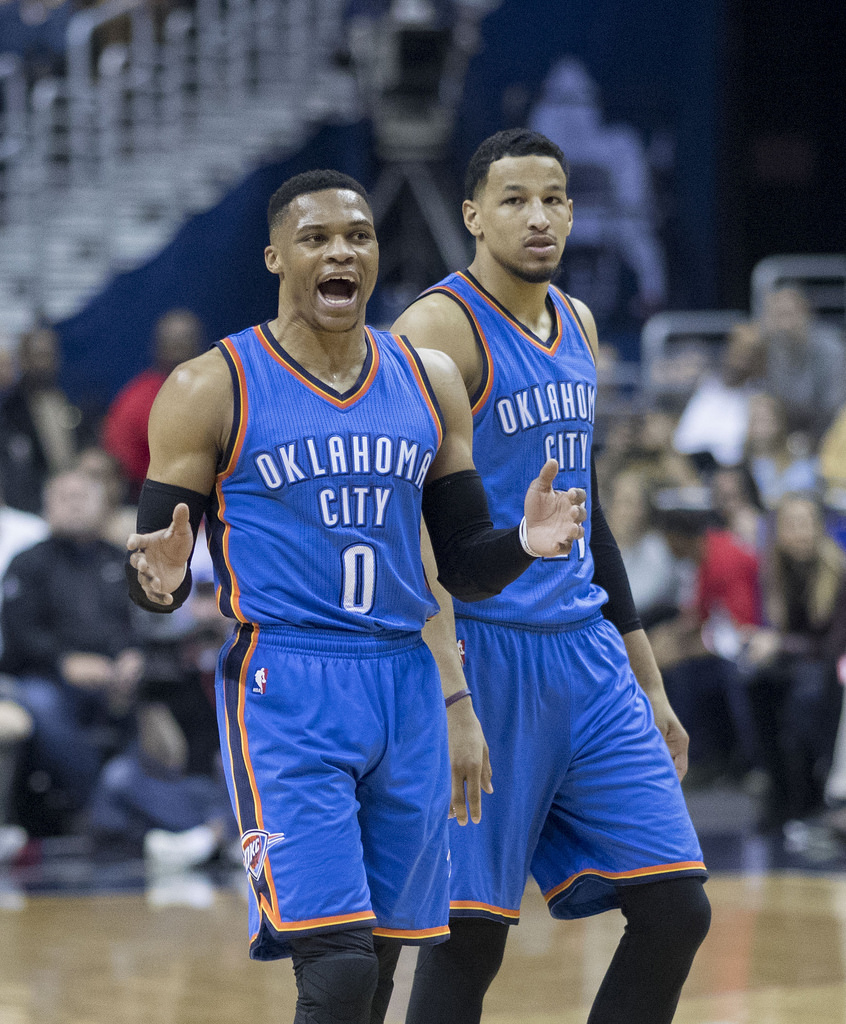 Dennis Velasco: To be honest, if it’s Westbrook or Harden, I won’t complain. Harden probably should have won last year, so he may get the “make good” votes, plus his team with a similar level type of cast, won more games than the Thunder. But, Westbrook averaged a freakin’ triple-double for the season. My gut feeling… the Beard wins thisclose with Russ being in line to get the “make good” votes next year. After writing that, I feel horrible and sick to my stomach. … Okay, I just did a five-minute Nae Nae and feel better. Let me know if you want to see the video.

Dan Tria: This award is the hardest to define, but there are three basic categories of MVPs – best player on the best team, guy who serves as an “alternative” best player in the game, or guy having an unprecedented season. All the “wins matter” people who live their joyless existence will go for the NBA’s most overrated player – James Harden. Yes, I said it. But he’s not on the best team, and is nowhere near a credible alternative for LeBron (the game’s best player). But, he is having an unprecedented season, even on the defensive end! Russell Westbrook, however, is doing something no one has done since Oscar Robinson and doing it in an NBA that is more competitive than in the Big O’s day. Here’s the other reason Russ is the MVP – without his nightly feats of greatness, the Thunder are absolutely terrible. There’s the idea of “value” creeping into the award. Look – the second best player in OKC is Enes Kanter. It would be criminal to give the award to anyone but Westbrook – especially a year after Steph Curry was the first unanimous MVP.

Those 16 seconds should suffice as an explanation as to why Russell Westbrook should be MVP. When Kevin Durant left town for the rival Warriors it was not betrayal, but rather setting Russ free. Boy did Russ run free this season. I will not mention triple-doubles. Instead I will mention he played in every regular season game. He carried a team to a sixth seed whose fifth leading scorer is a guy they traded for at the deadline (Taj Gibson for inquiring minds). In a time when star players rest for big games Westbrook never did. Every night he came for your head whether you were ready or not. He was this season’s John Wick. James Harden (who played just as many games as Russ by the way) and Kawhi Leonard deserve just as much consideration, but any chance ended with his performance in Denver last Sunday. We’ll never see this line for a season again: 31.9 points, 10.7 rebounds, 10.4 assists, 30.90 PER.

Tyler Birss: Spoiler – this is between James Harden and Russell Westbrook. For the majority of this season, my choice was Harden. He had all of the combinations necessary for this award working – individual greatness, elite level team success, and the ability to heavily raise the play of his teammates. My thoughts changed when Westbrook began to blow Harden out of the water on two of these levels – individual greatness and the making others better aspect. Yes, Harden plays on a more successful team, and yes, both the Houston Rockets and Oklahoma City Thunder would be horrible without its MVP candidates, but what Westbrook has done individually is one of the most impressive runs in sports history. Even though it’s extremely unhealthy for one player to have to do this much, Westbrook, put simply, is more valuable to his team than Harden. Barely, but enough to win the award.

Sonny Giuliano: As I wrote recently with Hardwood and Hollywood’s biggest nerd Dalton Baggett [Editor’s Note: Sonny has never seen my comic book collection – FB] , if I’m attempting to narrow down my MVP choice between any number of players, I ask myself four questions, and whoever turns out to be the answer to more of those questions is the player who gets the edge. Those four questions are:

1: Who had the best statistical season?

2: Who is the better all-around player in the league?

3: Twenty years from now, who will be the player you remember most from this season?

4: How well did the players team do in relation to realistic expectations?

Now just because Russ might not be the best all-around player in the league and the Thunder are only 6th in the Western Conference, that doesn’t mean he shouldn’t still edge out James Harden, Kawhi Leonard and LeBron James because his season has been so mind-blowing statistically, and because he’s absolutely owned this season from start to finish. Russ has been the big story all season long. In October, the three big narratives were Could the Cleveland Cavaliers defend their Title, How much better will the Golden State Warriors be with Kevin Durant, and What kind of season will Russell Westbrook have now that’s he’s totally unleashed and running a one-man show in Oklahoma City. And from the very first night of the season, Russ has been the NBA’s alpha dog and the league’s most interesting and entertaining player night to night.

Dylan Hamann: The bearded one has taken over, big time. He’s basically the Rockets offense, accounting for 57-points scored/assisted on. That’s the most since Tiny Archibald in 1973! Harden doesn’t care that Dwight Howard left, because he doesn’t need him. on the other hand, Westbrook NEEDS Kevin Durant if he wants to get to the Finals. Russ needs someone else to help carry the workload, unless he’s satisfied with breaking his back every game to only to carry OKC to the 6th seed. Now, major props to Westbrook for his play throughout the season and getting OKC Into the playoffs, but Harden did the same and his team has the better record. Statistically, when we look at past MVPs, there hasn’t been a single MVP in the fifth seed or lower.

When it get’s down to it, Harden has some of the best moves in the league and he doesn’t need triple-doubles to show he is the best player this season. Major props to Westbrook and his record-breaking season, but it’s just not enough.

Plus Harden has a beard a man could only dream of.

Mike Bitanga: Kevin Durant left for the Golden State Warriors last summer, and Russell Westbrook went insane on the hardwood this entire season to win MVP. That just sounds right. The triple-doubles, the game-winners, the tenacity; Westbrook completely hulked out after the break up, putting up numbers that are bringing up comparisons to Oscar Robertson. James Harden is definitely the other guy in the conversation, and it could go to either player, but Westbrook seems to have a slight edge. Westbrook is averaging 31.9 points, 10.7 rebounds, 10.4 assists, and 1.7 steals per game. He’s a straight up Monstar.