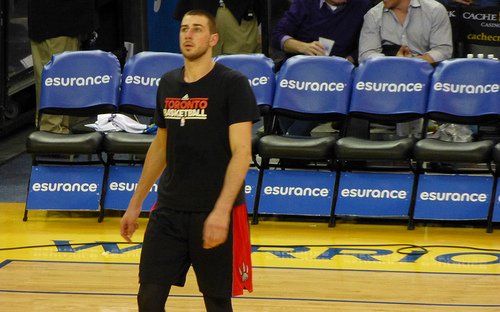 Jonas Valanciunas drew some concern from Kestutis Kemzura, the Lithuania national team basketball coach, in the 2012 London Olympics. He expressed his concerns to Sporting News that the then 20-year-old big man was struggling to find his A-game in the tournament. To make matters worse, four years later, Kemzura still saw Valanciunas playing horribly at the 2016 Rio Olympics. He only managed to average 6.7 points and 7.0 rebounds, and Kemzura could not find a concrete answer for his player’s dismal performances. Something for the Toronto Raptors to think about as online odds for the major NBA games take shape.

According to hearsay from leading NBA analysts and executives, Valanciunas has a reputation of showing little enthusiasm about training, and his sluggishness to adapt fails to deliver rim protection, a basic big man duty. As such, the Raptors still have an uphill climb to restructure their team this summer. Cory Joseph, DeMarre Carroll, and Patrick Patterson are some of the rotation players who have already left the club with the aim of developing young talent. However, the Raptors are yet to shed Valanciunas, who still remains a significant hurdle to complete their restructuring.

Many questionable factors surrounding the Lithuanian trickles down to the fact that most big players need to play in such a way that it reflects the game now – quick and with ball movement. According to one general manager, Valanciunas is still young and talented, but he has not improved his game for the last three years due to lack of dedication, which sabotages his trade value. Furthermore, the Lithuanian professional basketballer has an unfair reputation on the floor, in which his effectiveness comes out only when he has the ball. However, his teammates usually prefer giving the ball to Kyle Lowry and DeMar DeRozan, naturally, on offense.

Toronto only has up to February to trade Valanciunas even though, according to rumors, they continue to try to negotiate a deal. Discussions with Atlanta, Charlotte, Phoenix, Portland, and Sacramento have already collapsed. The worst fear regarding Valanciunas is failing to secure a trade and him disappearing within the squad. Painstakingly, the Raptors have offseason plans of cutting down salaries expenditures in favor of developing young talent, including Pascal Siakam and Jakob Poeltl. Poeltl returned to the United States from Australia and has been progressing well, especially regarding his shooting mechanics.

Since Patterson already left, the 21- and 23-year-old young and hungry players, Poeltl and Siakam respectively, will have more time to play. Next season, it seems the Raptors could prefer small lineups, particularly with the combination of Serge Ibaka with either youngster. The two players have a huge role to play in a lineup of players aged 24 or less, such as Bruno Caboclo, Norman Powell, and OG Anunoby.

The Raptors have focused their energies to revitalize a team that seemed unprogressive after only reaching the Eastern Conference semifinals last season, even though two years ago, they played in the conference finals. So far, Toronto has shown relentlessness in carrying out a complete overhaul of the squad to cut expenditures and open up growth opportunities for young players. The biggest challenge there is Valanciunas.