Kyrie Irving, current Cleveland Cavaliers star, wants out of Cleveland to be the main man. Irving said “he wanted to be the focal point, wanted to be the franchise player and no longer wanted to play alongside LeBron,” according to David Aldridge. So now that the Cavs franchise is potentially crumbling apart, let’s see some destinations that Irving could be shipped to and how that will happen with the help of ESPN’s lovely Trade Machine. Each trade will receive grades, an explanation of said grade, and a score out of ten on how likely it could happen. Let the games begin! 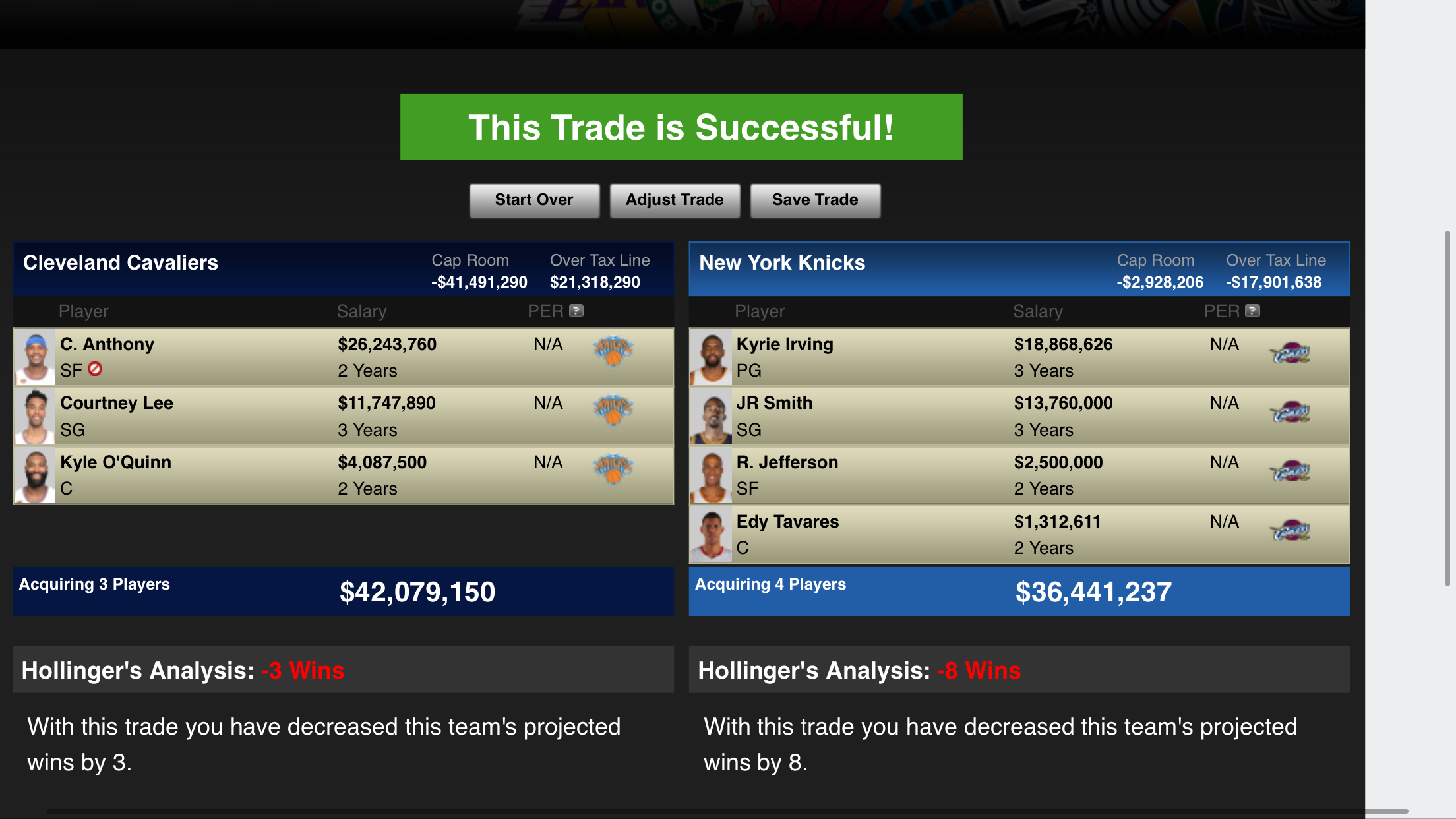 Cavs Grade: C
Look, the main reason this trade grade is not higher is because I don’t see the point in picking up Anthony if you already have James. The upside of this trade is they get a developing Kyle O’Quinn and a first round pick. Courtney Lee could start over Iman Shumpert, as he’s a slight upgrade in both defense and shooting. The Cavs do trade away Smith and Jefferson, both of whom were integral parts in the 2016 NBA Finals, especially Jefferson for his defense. Overall, with this trade, the Cavs have no direction whatsoever; basically, they’re just waiting until James says bye-bye.

Knicks Grade: B
Yes, the Knicks are basically stealing Irving and dumping Anthony’s contract and old body to the distraught Cavs, but this trade certainly isn’t perfect. Who in their right mind wants Edy Tavares, especially after losing Kyle O’Quinn. Here’s your answer… nobody. Well, maybe Phil Jackson might have, but he’s not there anymore. Lee isn’t too big of a loss, plus the pick is top-ten protected, so if by some miracle this team flails or blows themselves up mid-season, you still potentially have your pick. This definitely favors the Knicks.

Actuality Score: 7.0
Only because the Knicks and Cavs both have new GMs who may be eager to get a trade going and find a direction after a trade; this could be that trade that shows them what they have to work with. Other than that, if I were the Cavs, I wouldn’t do this trade at all. If I were the Knicks, I’d participate fully in this robbery. 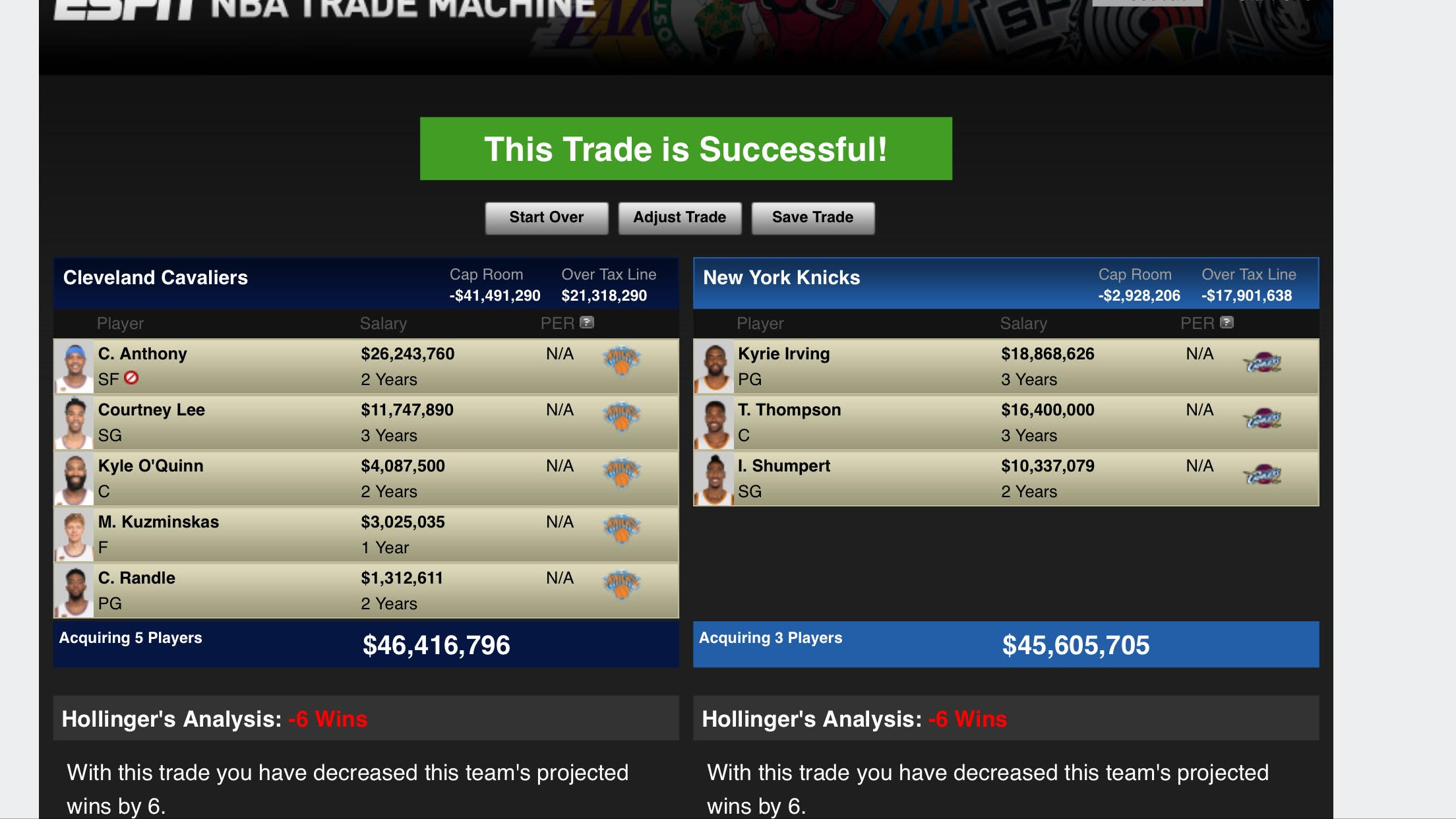 There is little value here that the Cavs are getting. It’s very confusing, yet you get young guys who can grow like Chasson, Kuzminskas, and O’Quinn, but you get a win now “superstar” in Anthony, and a washed up Courtney Lee. Why would the Cavs ever do this? This is the worst trade scenario for the Cavs in terms of potential Knicks trades.

Knicks Grade: A-
Could you imagine this team? There starting lineup would be – Irving, Tim Hardaway Jr., Lance Thomas, Porzingis, and Tristan Thompson. If that team doesn’t compete with the Boston Celtics, I don’t know what will. This team has one offensive big man and a defensive big man. (I don’t think I need to tell you which is which). The only weak part is the SF position which you can trade for somebody decent to back up Thomas, or throw everything you have left at a team to get a star at the position. This would be a perfect trade for the Knicks if they could get rid of Joakim Noah‘s excessive deal.

Actuality Score: 3.5
Are you kidding me? Do you actually think whoever is in charge of the Cavaliers would take this deal? I’ll answer for you – no. On second thought, maybe they would. For the Knicks this is a Win-Now no-brainer. This would be a theft. 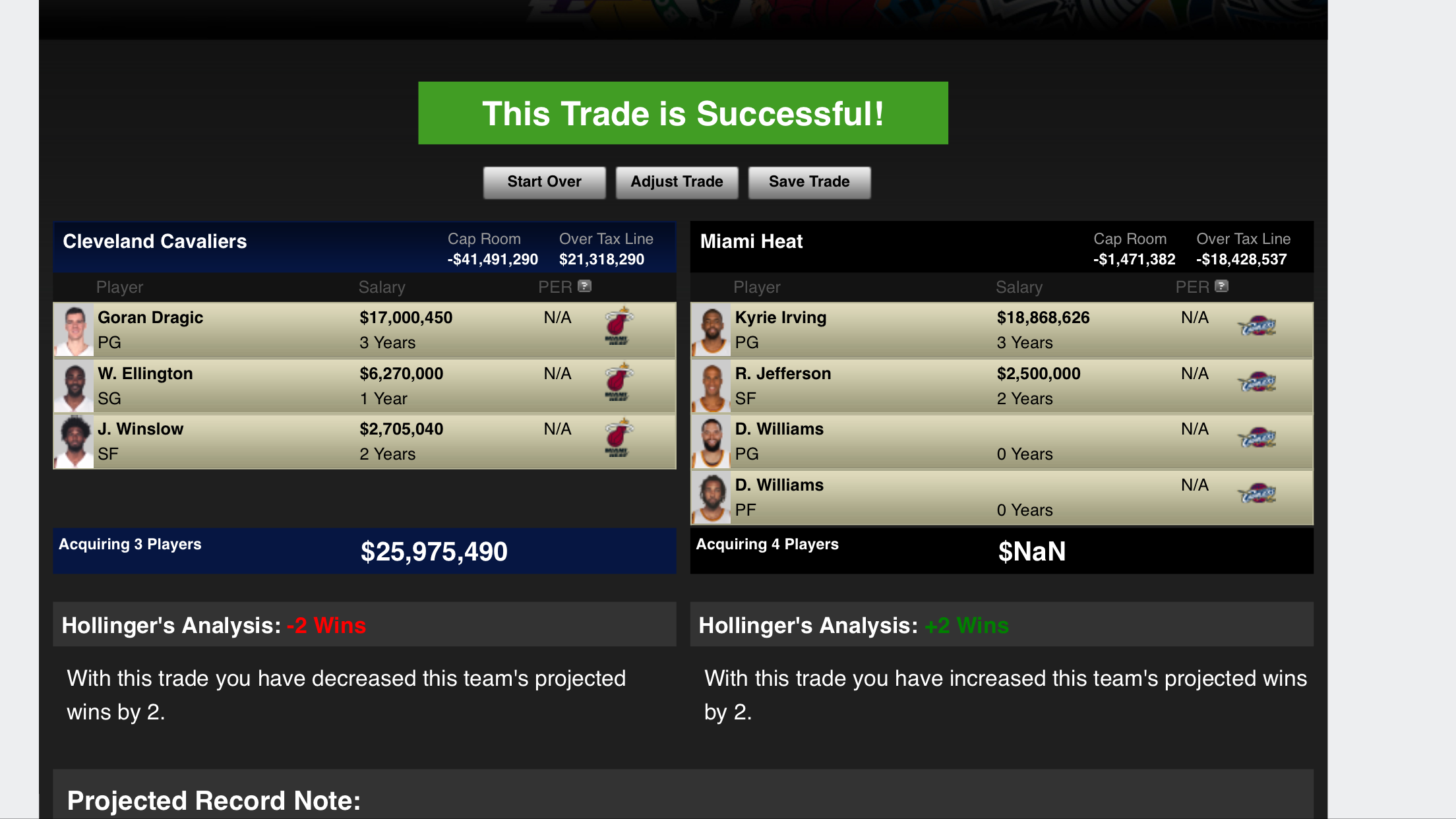 Cavs Grade: B-
The Cavs get great young talent in Winslow. He can progress and become a great wing defender with a shot. Wayne Ellington can play backup SG while Smith is at SF. Dragic becomes their starting point guard. Dragic was constantly improving last season dishing the ball more while being able to put up a shot every once in awhile. This might give the Cavs the three seed next year. None of these will be enough for a top seed, however.

Heat Grade: A
This is about as perfect as a trade can get for the Heat. They get an amazing scoring threat who can practically do it all in Irving. They also secure that they at least have two small forwards with this deal and decent ones at best. Also, you have a solidified backup point instead of Josh Richardson.

Actuality Grade: 8.0
This gets a high rating mainly because the Cavs are reported as being fond of Winslow, and this way they still have a starting caliber guard, and they also are receiving Ellington and three second round picks. The upside of those picks is they can help you package up for more “role players” and “playmakers” that James desires. Bottom line, if you are the Heat, I don’t see a reason to decline this deal. 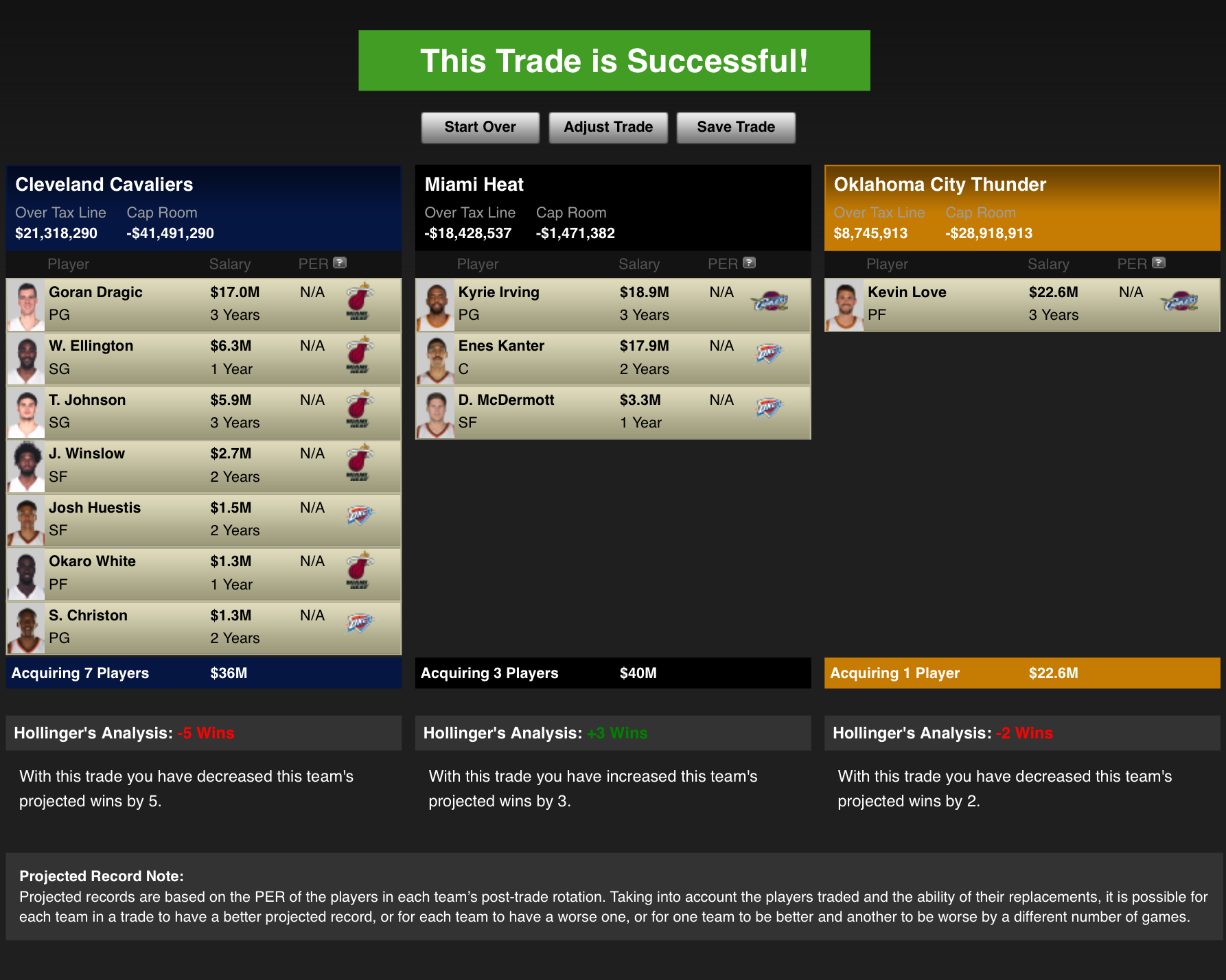 Complete Grade:
So for this monster of a deal I’m going to just do an all together summation, then give ratings. So there are multiple big pieces moving. On the Cavs side they pick up a good point guard. They pick up two more shooting guards which isn’t quite a great thing for them, but these guys are of similar value but lessser price than JR Smith and Iman Shumpert. You can package those guys by sending them to the San Antonio Spurs for Tony Parker, Dejounte Murray, and David Lee. Also giving San Antonio their first round pick this year and cash considerations. The Cavs will also receive a second round pick to be determined. Finally for the Cavs they get an absolute stud in Winslow. This easily makes Miami the second best team in the East. For the Thunder it’s simple. You get another piece for a championship run in Love. This could possibly let them contend with the Warriors.

Actuality Rating: 1
No GM in the league is crazy enough to do this. It may make sense when I explain it, but for some GMs there is just too many question marks. Also I feel out of all people Dan Gilbert and the Cavs would wimp out of this one.

Thanks for reading the first part of this piece, part two will be out soon as well.