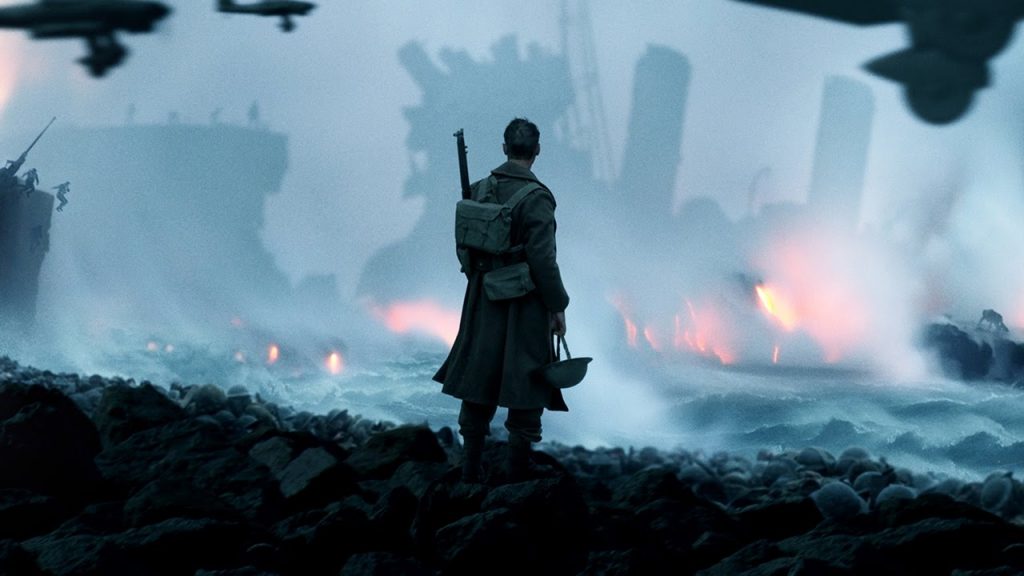 Flyers float in the air, as a weary young soldier nabs one. It reads, “We surround you.” The German army has Allied soldiers from Belgium, the British Empire, and France enclosed, as the Allied soldiers attempt to evacuate in Christopher Nolan’s World War II film, Dunkirk. Nolan takes on the war genre this time around, and gives us a war film unlike any other before it. Dunkirk stars Fionn Whitehead, Mark Rylance, Cillian Murphy, and Tom Hardy.

Dunkirk is a war experience on celluloid. It is unwavering, tense, and encompasses the feeling of being on a battlefield where hope is just out of reach, dangling in the distance like a cruel joke. The film is a technical masterpiece, from sound mixing, to cinematography, and editing. From the first piercing bullet fired, you know that this film is a ticking time bomb. Nolan proves once again why he is a master of his craft.

The film jumps back and forth between different perspectives of the same events, making for introspective observations of the human condition during war. It may be a little confusing at first, but it works very well. Now, the film hits the ground running from the very first scene, and there isn’t much time dedicated to character development, as it makes it about the event more than anything else. This is initially somewhat odd, but it works if you open up to it, as you can find relativity through their actions in war without needing to know their backstories.

The script is straight forward, but since it hops around various perspectives to delve deeper into the war, it makes the experience an exhausting one, and I mean that in a good way. You may feel a little heavier walking out of the theater. Did I mention that this movie is PG-13? No blood, no limbs, no problem for Nolan.

There is fantastic acting all around, especially by Tom Hardy and and Mark Rylance. Tom Hardy plays Farrier, a Spitfire pilot that’s doing his utmost to protect those on the ground and sea.  Hardy is, once again, behind a mask for a majority of the film, but he is able to express emotions through his eyes better than what half of Hollywood could do with their whole face. Mark Rylance also stands out as a Mr. Dawson, a dedicated civilian and father that bravely puts his life on the line to save as many soldiers as possible.

Surviving is a victory through mental perseverance, and that is one essential aspect of war that Dunkirk shows us. This is a beautifully shot war film with tension that never falters. We know that war is hell, but now with Dunkirk we can feel it. The film allows us to experience cowardly actions and heroic feats, as if we were there. Dunkirk is yet another victory for Mr. Nolan.