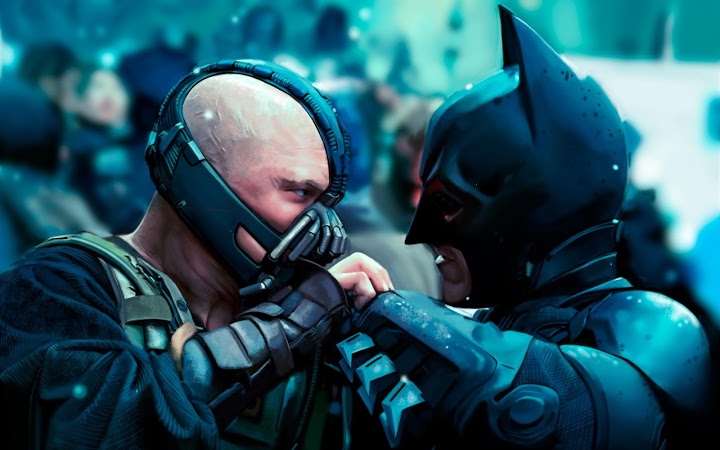 Christopher Nolan’s The Dark Knight Rises was released on July 10, 2012. The film was the final installment of Nolan’s Batman film trilogy. The film’s cast included Christian Bale (The Prestige), Anne Hathaway (The Devil Wears Prada), Tom Hardy (Warrior), Gary Oldman (The Fifth Element), Michael Caine (The Italian Job), and Morgan Freeman (Ted 2). The plot involved an older Batman fighting Bane in order to save Gotham City from nuclear destruction. Given the five year anniversary, let’s discuss five facts that you may not have known abut the movie.

Fact 1: In order to play Bane, Tom Hardy (who stands at 5’9″) had to wear 3 inch lifts in order to appear as tall or taller than costars Christian Bale, Morgan Freeman, and Michael Caine.

Fact 2: Production designer Nathan Crowley approached designing the Bat as if he was designing a military project so it can fit in with the previously shown Tumbler and Batpod. He drew inspiration from military aircraft such as the Harrier Jump jet, the Bell Boeing V-22 Osprey, and the Boeing AH-64 Apache.

Fact 3: Bane’s voice sounded super distorted the first time around. His lines had to be re-recorded because it was almost impossible to understand what he was saying.

Fact 4: There were approximately 10,000 extras used during the football game scene. Some of the Pittsburgh Steelers such as Hines Ward and Ben Roethlisberger played football players.

Fact 5: The film’s plot was going to include the Joker on trial and Two-Face, having survived his fall in The Dark Knight, going on a rampage across Gotham. However, since Heath Ledger died, the film’s plot was changed.

The Dark Knight Rises was the third film in Nolan’s Batman film trilogy. The film was released on July 20, 2012. Hopefully this article reminds you of how excellent the movie was and why it’s worth revisiting five years later.