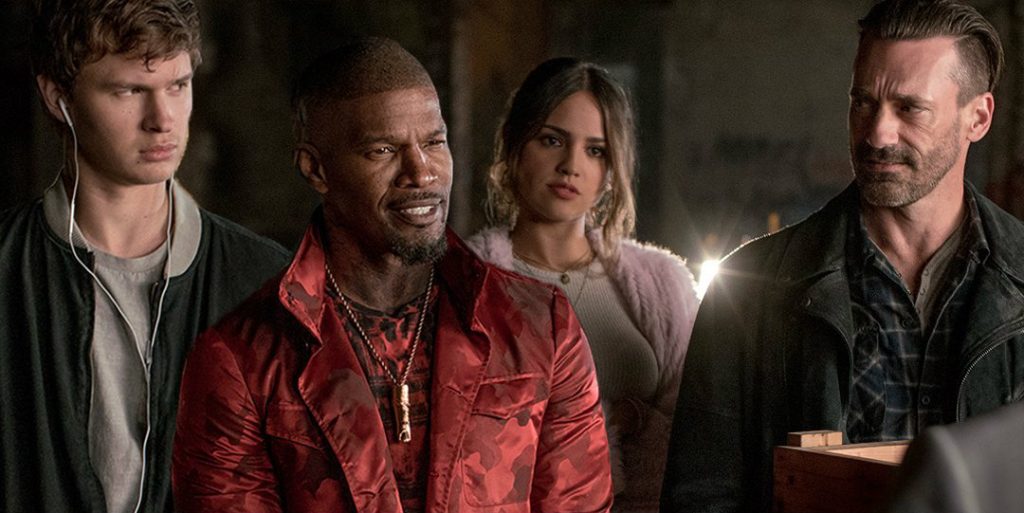 Music makes the world go round for a character named Baby, and his world is any wheel that he’s behind. Written and directed by Edgar Wright, Baby Driver tells the story of a talented getaway driver that gets pressed into working for a crime boss to pull off some heists. Baby has tinnitus, a hearing impairment leaving him with a constant ringing in his ear, and he drowns it out with some of the best tunes on his iPod. This action flick stars Ansel Elgort, Kevin Spacey, Jamie Foxx, Jon Hamm, and Jon Bernthal.

Wright has made a massively entertaining film with a clever script, interesting characters, and amazing practical stunts. Once again, he adds a flick to his filmography that is hard to rank because all of them are exceptional. The car chases are beautifully done, as Baby is a wizard behind the wheel. He’s drifting through traffic, playing three-car monte with the cops, and slipping by like butter. The driving stunt team did a terrific job all around, pulling off all the crazy, creative ideas Wright threw at them.

The soundtrack is on point with every scene as well, but it doesn’t make the movie, rather it compliments it, as each song used was well-thought out. At times, it almost feels like it’s partially a musical, as Baby will dance around to the tunes as the camera sticks with him. This film is very stylish, but it does have substance, as seen through each character.

Baby is a quiet, ballsy character that is quite likable. Ansel Elgort plays the do-right wheelman with confidence. Music drives Baby so that he can drive like a man possessed, and Elgort embodies that so well. The audience is always in tune with how he feels, as conveyed through his body language, and the songs that compliment his emotions. Elgort shifts beautifully through all the chaos of the criminal world, and although he has a heart of gold, when he’s revving up, you can see the devil in him.

The veteran supporting cast doesn’t just show face, their characters are actually quite interesting. Kevin Spacey as Doc, the brains of the operation, is menacing, but with more to him that breaks past the cliche ruthless crime boss. Jon Hamm plays Buddy, a fairly nice thief, until he’s pushed to the limit and is out for revenge. Last but not least, Jamie Foxx plays Bats, who’s pretty much just batshit crazy, and he’s clearly having some fun in the role. None of their roles feel wasted, when they easily could’ve been.

The minor flaw in the film is the chemistry between Baby and his love interest, Deborah. Lily James does very well in the role, but there could’ve been a little more done to develop the relationship so that the audience would care more; however, there’s enough incentive to cheer for them in the final act.

Baby Driver is a pulsing, stylish flick that grooves through violence. The mix of amazing scenes and perfectly fitting tunes can only be done by the insane Edgar Wright, and he does so masterfully with Baby Driver. Even the bullets are on beat! This is a film with a throwback premise, but a unique take on the getaway driver. Wright perfectly orchestrates style, action, and story together, resulting in a comedic action flick that’s always on beat, even when life isn’t.