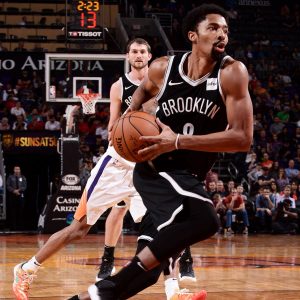 The Brooklyn Nets were already without Jeremy Lin due to injury, and now with D’Angelo Russell on the sidelines with a knee injury, Spencer Dinwiddie has been thrust into the starting lineup. Spencer did not disappoint, but quite the contrary as he exploded during a 118-107 win over the Jazz on Friday, scoring a career-high 25 points, five rebounds, eight assists, two steals, six 3-pointers, and no turnovers.

Dinwiddie is the first player in Nets franchise history to record 25 points, six 3-pointers, and eight assists with no turnovers in a game. With D’Angelo expected to miss a good amount of time, Dinwiddie now has the keys to a young Brooklyn squad with it’s eyes on the future. With Friday night’s performance he may have cemented his role moving forward with the team.