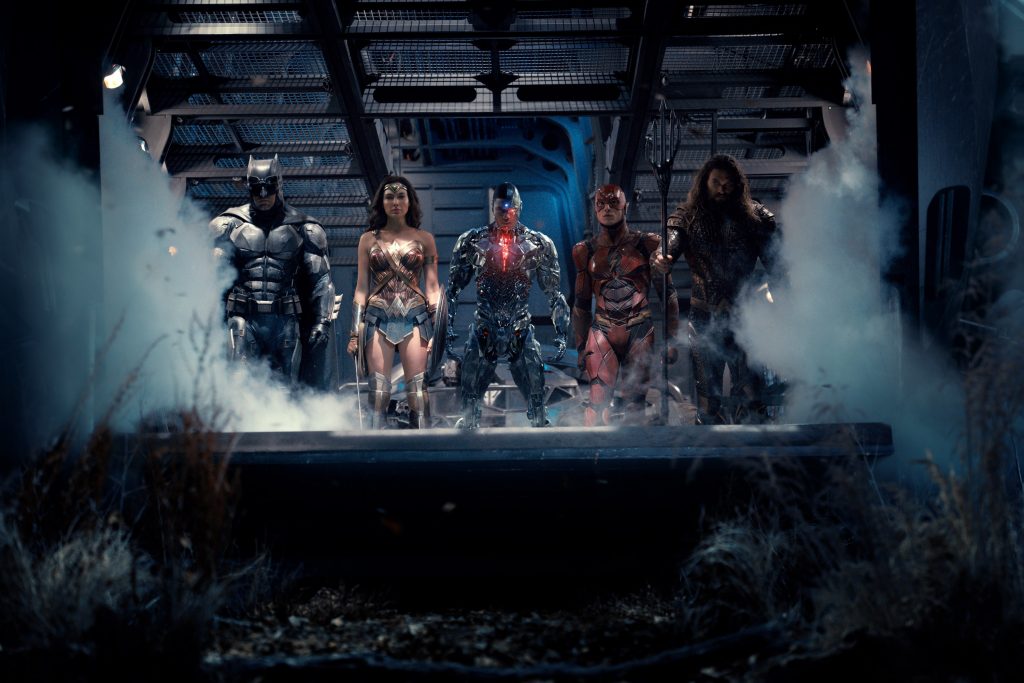 Batman, Wonder Woman, The Flash, Aquaman, and Cyborg share the silver screen for the very first time in Justice League. The ancient, powerful extraterrestrial named Steppenwolf invades Earth with his army of parademons, as Batman and Wonder Woman assemble a team of metahumans to stop him from retrieving the all-powerful mother boxes. Zack Snyder is back in the director’s chair, with a little help from Joss Whedon, to bring us the highly anticipated super hero team flick. Ben Affleck, Gal Gadot, and Henry Cavill return, and they’re joined by Ezra Miller, Jason Mamoa, and Ray Fisher to make this comic-book dream come to life.

Snyder’s direction in this film is much easier to follow, especially in comparison to Batman vs. Superman: Dawn of Justice. He indeed goes from point A to point B with a clear plot; however, it’s not a very interesting one. There are jokes throughout the film, but several of them fall flat and feel somewhat forced. At times, the humor just doesn’t match with some of the characters. The CGI used in this film ranges from decent to Star Wars prequel vomit (okay, maybe not that horrible). With all the editing and reshoots done, the film feels like it’s missing pieces here and there; although, it does flow better as the film progresses.

Danny Elfman gives us an epic score, and mixes the classic 1989 Batman theme song in as well. For fans of Batman 89’ or The Batman Animated Series, the tune is quite a pleasant surprise. Eflman even resurrects the 1978 Superman score by John Williams. There are some fitting song choices as well, such as “Everybody Knows” covered by Sigrid, and “Icky Thump by The White Stripes.

The villain of the film, Steppenwolf, is like a CGI video game boss in a mediocre game. He poses no real threat, and his motivation to use the mother boxes to conquer the world is bland. His army of fear-hungry parademons could be more threatening, but the crew squashes them like bugs left and right.

What makes this movie is the portrayal of the Justice League members and their chemistry with each other. Ben Affleck as Batman/Bruce Wayne continues to impress as the Caped Crusader. He’s not the blood-thirsty Batman from the previous film, as he’s trying to give the world all he can because he only has a few battles left. Gal Gadot continues to do a magnificent job as Wonder Woman, fighting for those who cannot. Ezra Miller makes for a notable Flash, giving a quirky performance that works. He’s a stand-in for the audience at times, representing how we would react to these superhero legends. Jason Mamoa’s Aquaman doesn’t do a whole lot, but he does have a certain swagger that can definitely carry a whole film on its own. Finally, there’s Ray Fisher as Cyborg, the lesser known character of the Justice League. Fisher portrays the character well, even when he’s put in sweatpants half the time to save money on CGI.

It’s safe to say that you probably know that Superman is making a comeback in this film. Henry Cavill as Superman truly feels like a beacon of hope in Justice League, and this is probably the best performance that Cavill gives as the ultimate boy scout.

Justice League is not a terrible flick, but it could have been so much better. All the actors turn in worthy performances. Despite the mediocrity of the film, there are a few moments that work really well, like Batman coaching The Flash in his first battle, or Wonder Woman and Batman’s discussion about a certain resurrection. These are glimpses of a better movie that could’ve been.