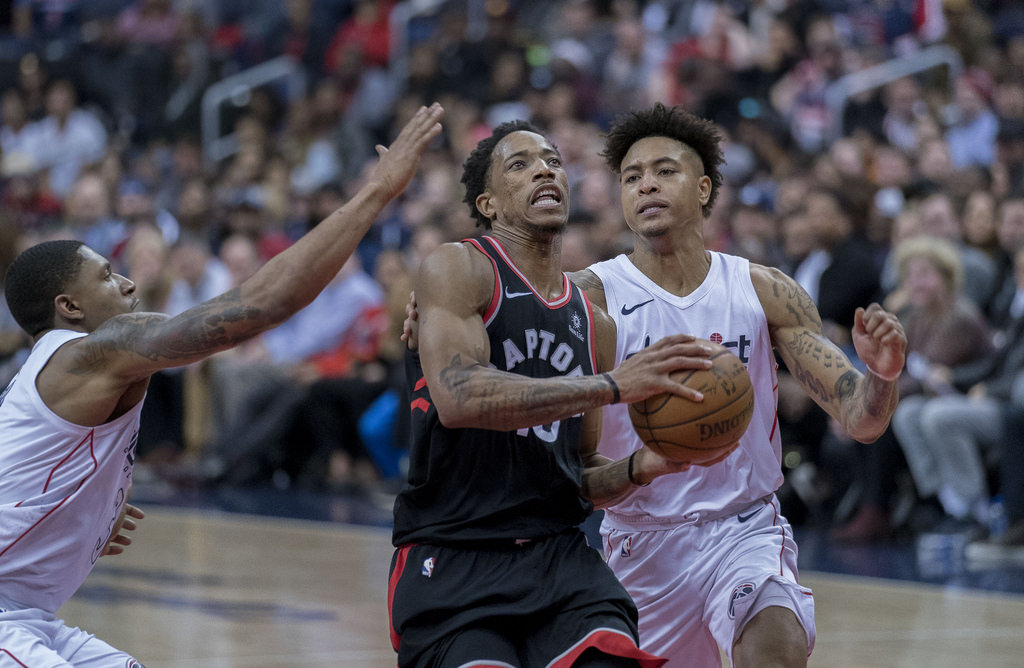 Since the 2013-14 NBA season, the Toronto Raptors have either sat atop the Atlantic Division at the end of the regular season and/or won 50+ games. They’ve done both those deeds twice in this five-year span – this current season and two seasons ago. In a nutshell, they’ve been very, very good, even though they always seem to be underrated. However, when you look at their playoff performance in this span, perhaps it’s right to sort of overlook the team up north.

Despite owning homecourt advantage in every single first round matchup, the Raptors have lost every single Game 1 in recent postseasons:

“Our Game 1 is our Game 7,” Kyle Lowry said recently, as a way to, one can assume, acknowledge the team’s Game 1 futility in order to focus and get passed it, and hopefully win the game. Well, as a(n) (in)famous United States president recently said, Mission Accomplished! Raptors won 114-106 in Game 1 of their first round series. Serge Ibaka led the way, scoring 23 points and grabbing a dozen rebounds. The Raptors’ star, DeMar DeRozan had a bad shooting performance (6-for-17), finishing with 17 points, but also six dimes. Lowry dropped 11 points and nine dimes.

Toronto got over the hump! So, could this be their year? A year in which they finished above teams with better expectations and better chances of being the top dog in the East before the season? The Boston Celtics added Kyrie Irving and Gordon Hayward before the season and were co-favorites to take the East along with the defending Eastern Conference champion, Cleveland Cavaliers, led by that guy named LeBron James. Well, with injuries, seemingly bad chemistry, and just good old-fashioned bad luck to those two teams, this year is as good a time as any for the Raptors to actually be recognized as true contenders and not some band of also-rans.

Don’t believe in the power of the dinos and think that this is just some sort of anomaly in their postseason pursuits? Well, after last night’s win in Game 2 over the Wizards, the Raptors are now 2-0 in the series, the first time they’ve ever been 2-0 in franchise history! It’s a sign from the basketball gods!!! Okay, fine, all of that is hyperbole since it’s a small sample size, so let’s get analytical here about the season.

For a Dwayne Casey-led team, this season’s team put up the best ever team record (59-23) and SRS (Simple Rating System; a team rating that takes into account average point differential and strength of schedule. The rating is denominated in points above/below average, where zero is average) of 7.29, followed by a 4.08 from two seasons ago. They also played at its fastest pace (number of possessions per 48 minutes) of 97.4, which is better than 94.7 they put up last season. They also have the best Offensive Rating (points per 100 possessions) of 113.8 in franchise history after last season’s 112.3. The Raptors were fifth in the league in Effective FG% at 53.9, fourth in True Shooting Percentage at 57.5, third in Offensive Efficiency at 111.0 behind the Golden State Warriors (112.3) and Houston Rockets (112.2), and fifth in Defensive Efficiency at 103.4.

Whew! That all said, the Raptors, like every other NBA team not playing golf, still need to play the games. But, despite walking in unknown lands, all of the numbers above are a good map to look at as to why they’ll be successful.