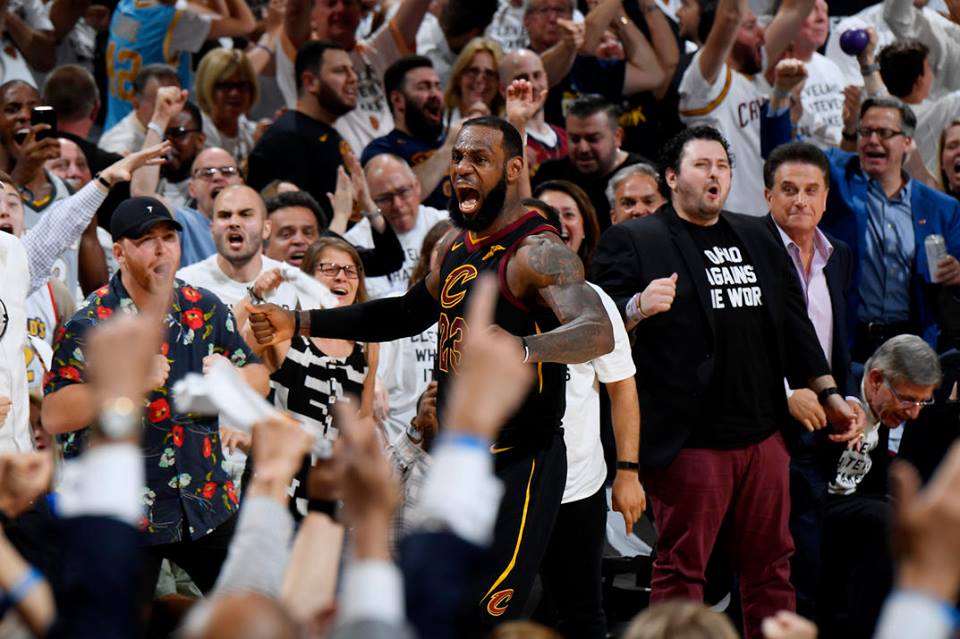 Last night, an hour or so after Game 7 of the Eastern Conference Finals had concluded, my Aunt Mary called me. She often does this after big Cleveland Cavaliers wins. She did this after significant Miami Heat wins from 2011 through 2014 too, because she knows better than almost anybody how emotionally invested I am in the career of LeBron James, because she was one of the first people I told about LeBron James.

That’s what she told me last night. She was very frantic and excited as she always is, and I had been frantic and excited a bit earlier too considering my favorite basketball player was now going to his eighth consecutive NBA Finals, but by that time I had calmed a bit. And I actually corrected her while we were on the phone.

“Thanks, Aunt Mary. But I didn’t know this. I didn’t know he was going to be this great. There was no way to tell that this was coming.”

Now of course, the argument could be made that this was in the cards all along. After all, James signed a $90 million Nike contract before he ever played in an NBA game. His high school team, St. Vincent-St. Mary’s, was featured on ESPN multiple times during his final two years there. He appeared on the cover of Sports Illustrated and was heralded as “The Chosen One” when he was 17 years old. And if you’re a member of the “It’s stupid to compare LeBron to MJ … LeBron will never be MJ” crowd, I suggest that you go don’t go back and re-read that terrific cover story, because the first mention of Michael Jordan comes in the first paragraph. If you continue reading, his name is mentioned 18 more times, the last of which is here:

“Above the television in the Jameses’ modest west Akron apartment, LeBron keeps an ersatz SI cover featuring his photograph and the cover line IS HE THE NEXT MICHAEL JORDAN? It’s preposterously too early to answer, of course, yet judging from young LeBron’s unprecedented rise, it’s a question that is at least worth asking.”

As early as February 18th, 2002, the sports world was wondering if LeBron James, a Junior in high school, was going to reach the heights that the undisputed greatest basketball player of all-time had reached. In retrospect, it’s preposterous that these expectations were put on the shoulders of a 17 year old. Even more preposterous than that is the fact that somehow, against the truly overwhelming odds and many years of history, LeBron James has not just lived up to the hype … he’s surpassed it.

This column isn’t going to descend into the typical Jordan vs. LeBron fodder that you’ve read on various sites and will continue to read until the next guy in line in the Greatest of All-Time discussion is playing while MJ and LeBron are both out of the league. An unbiased take on that debate is often fun and insightful, but that’s not what this is meant to be. Truth be told, I wanted to get through this whole thing without mentioning the name of the Ghost in Chicago once, but it’s impossible to do that since he’s been The Bar for so long.

Ultimately, this column isn’t meant to re-establish and re-introduce my belief that LeBron has surpassed Michael Jordan, nor am I going to try to convince anyone that they should alter their positioning on the All-Time List that all NBA fans have their own version of. If you haven’t bumped LeBron past Jordan yet, it’s likely a hang-up on the whole Finals record thing, and if you’re choosing that path of simple math as your route to get you to your destination, then so be it. I’m not changing your mind, and nothing that LeBron James can do will either.

All I’m asking is this: take a deep breath, put aside your personal feelings (love or hate, because either way you are going to have a biased outlook), think about the expectations and how the deck was stacked against him — the ceiling sports fans and experts and analysts set for LeBron James was “Michael Jordan” and anything below that was going to be deemed a failure — and then just appreciate the career we’ve been witnesses to for the last decade and a half. If you’re having trouble doing that on your first attempt, try again. If you can’t do it that second time, try again. Don’t stop trying until you are able to put this into perspective, because as an NBA or a sports fan, it’s very important that we don’t let the accomplishments or the story of any truly profound athlete become marginalized, especially that of the most important athlete of the 21st Century.

If you aren’t a true sports fan — if this shit doesn’t course through your veins — then this is all irrelevant. If you don’t think about this stuff on a daily basis and if the history of sport doesn’t matter to you, then even though I believe it’s your obligation to handle this stuff with care, you never will and my words hold no weight for you. If you do belong to the breed that I come from, if we’re cut from the same cloth, you know that this stuff is important. You know that sports are vital to society as a whole, and you know that the greatest athletes of All-Time, and I’m talking about the guys at the very top of the pyramid — Jordan, LeBron, Muhammad Ali, Tom Brady, Jim Brown, Wayne Gretzky, Bill Russell, Tiger Woods, Babe Ruth, etc. — you know that these athletes and their stories need to be told accurately to keep this going. If we minimize what they accomplished, if we minimize the fact that at times they resembled real life honest to God superheroes, then this eventually all fades away. And we can’t let that happen.

I understand why there are those who suffer from LeBron fatigue … if you’re a fan of a team who has crossed his path a number of times, it’s natural that you’d develop a distaste for him over time. But there is a very large difference between dislike and lack of appreciation, and my challenge to all of the sports fans out there who call themselves as either knowledgeable or passionate would be to make sure you can distinguish the two.

I suspect that in time we’ll eventually get to that place. The ground that LeBron has made up on that front just in the last two years is remarkable and actually somewhat surprising given what I know about how hard-headed some sports fans and analysts are, but once he’s out of the NBA it’ll be easy for his legacy to be appreciated. It’s unfortunate, but often times sports fans don’t know what they’ve got until it’s gone. Maybe there’s a surge of appreciation now because common sense says LeBron’s career is in it’s last act. Fifteen years, over 50,000 minutes and now nine NBA Finals appearances … that’s a full pantheon career. But based on what we’ve seen over the past month, it doesn’t look like LeBron is fading.

Yet again, LeBron James has used the postseason to remind everyone that he’s still the very best player in the NBA by a more considerable margin than we often realize. Even I — someone who has been called a LeBron lover, fanboy, and apologist over the last month — am surprised by what he’s been able to do. I didn’t see this level of dominance in the 2018 Playoffs coming. I didn’t see any of this coming in February 2002 when I was gushing to my Aunt Mary about a 17 year old who was going to be my favorite NBA player. There’s no way to say we could have seen it coming. It seems impossible that anyone could’ve conjured this combination of longevity, dominance, brilliance, clutch play, and importance off the floor and projected it onto LeBron James, but that’s what has happened. No matter how many more awards or championships LeBron James wins, this will forever be his legacy, and we’ve all failed him and every other once in a lifetime athlete who has come before him if we don’t cherish that.