Dinosaurs roamed the Earth and had their time, but if they were really brought back through cloning, what rights do they have? Jurassic World: Fallen Kingdom picks up a few years after the events of Jurassic World, and throws that question out there for Claire and Owen to chew on, as a volcano is about to erupt and wipe out the dinosaurs on Isla Nublar. J.A. Bayona is in the director’s seat this time, and Chris Pratt and Bryce Dallas Howard are back, and they’re joined by Rafe Spall, Justice Smith, Daniella Pineda, Toby Jones and James Cromwell.

Filled with half-baked ideas, this Jurassic World sequel just doesn’t have any solid footing, and honestly fills like filler. However, it’s quite entertaining filler, and also beautifully shot. Silhouettes, reflections and sharp angles are just some of the tricks Director J.A. Bayona and his crew use to create a visually pleasing film. It also mixes the use of practical effects with CGI quite well, and, at times, the dinosaurs look just short of amazing. Bayona also creates some thrilling action sequences that are also fun, making it easy to overlook the messy plot for a few moments.

As for the script, it basically feels like a rough draft that had pretty good potential of topping Jurassic World, but with no follow through. There are plenty of interesting concepts floating around in the film, like whether or not cloned dinosaurs deserve to be treated like an endangered species, but those ideas are only treaded upon very lightly. The script also contains some very questionable actions by many of the characters, even the likable ones.

Pratt and Howard Still Having Fun 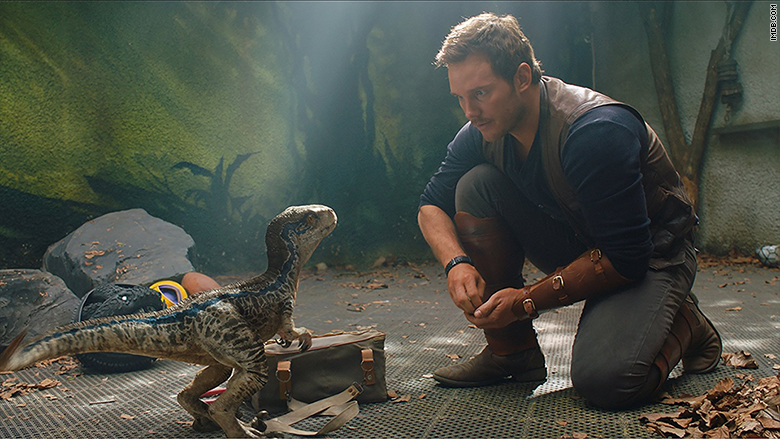 Chris Pratt is back as Owen Grady, the burly badass with a soft spot for a particular raptor named Blue. Pratt’s doing his usual routine, making snarky remarks and kicking butt, but it’s enjoyable to watch. We get a little more into his relationship with Blue, but it’s only effective enough to elicit the minimal emotional response. Bryce Dallas Howard is back as well, playing Claire, who is adamant about rescuing the dinosaurs on Isla Nublar, since she’s been fighting for dinosaur rights since the chaotic events of Jurassic World. Claire is more likable in this flick, and has a little more depth to her character, as she contemplates her past actions that are questionable at best.

There are two new, younger characters, and I don’t remember their names because they just weren’t that interesting. Sure, they were kind of funny every now and then, but they didn’t feel necessary. I guess you could call them the comic relief, but sometimes they’re just a nuisance. Then there’s Jeff Goldblum, who’s back as Ian Malcolm, but it’s basically a cameo role, so don’t hold your breath. They also introduce a new character played by James Cromwell, named Benjamin Lockwood. He’s never been mentioned in any of the films before, but he’s introduced here as the old partner of John Hammond. When he appears onscreen I could almost see the Producers shrug, as if to say, “just go with it.”

Although I enjoyed this film for what it is, a messy dinosaur flick with plenty of visual flair, fun leads and solid action, it could’ve been much better. At its best, it makes for a decent appetizer of things to come. The dinosaur action in the film pleases the 8-year-old version of me just fine, and the film does leave us at an interesting spot, so there is hope that we’re being led to a better film in the third installment. And then, I think of Jurassic Park 3, so, who knows?