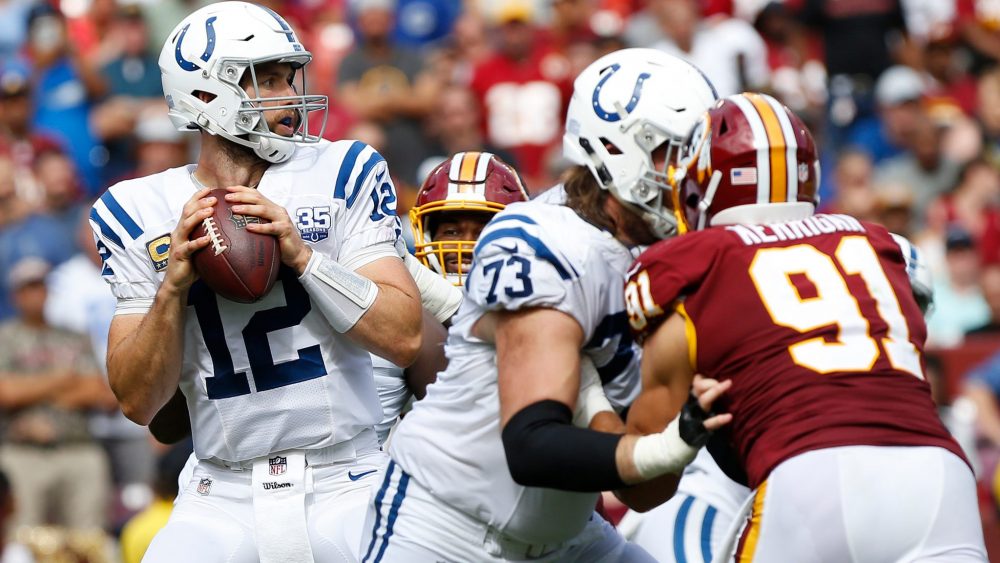 It’s Week 3 of the 2018 NFL season and the Buffalo Bills are already 17-point underdogs in a game. Oh boy.

Like the Bills, I didn’t have the best of weeks in Week 2. However, I am in second place in the Handicapping Sports Staff Picks contest with a record of 17-14-1. So I’m still reliable.

The week starts tonight as the New York Jets look to keep those Bud Light victory fridges sealed while the Cleveland Browns look to improve to 1-1-1. I am a Browns fans and I don’t even care about the free beer. I just want to see my team win for the first time since Christmas Eve of 2016.

Now for the picks…

Easy choice here. And this is not just me being a homer. The Browns defense has been dominant during the first two weeks and after shutting down Drew Brees, the unit will force takeaways early against Sam Darnold. The game will be close, but the Browns will still cover and pick up the victory.

Carson Wentz is back! But so is Andrew Luck as he brings the Colts back to relevance. The Eagles were gifted a win against the Falcons in Week 1 and lost to the Bucs in Week 2. They should pull out a victory here, but not by more than six points.

Apparently, the Bengals are the real deal. The team has posted two 34-23 wins to start the season and will remain undefeated with a win over the Panthers.

The Saints barely beat the Browns. They are not the Super Bowl contender some had predicted.

This one is tricky. The Ravens blew out the Bills in Week 1 when Nathan Peterman was the starter then followed that up with a loss to the Bengals. Meanwhile, the Broncos pulled out close victories against the Seahawks and the Raiders. I like the Broncos in this one because of the spread, especially against a Ravens team that can’t really boast about its only win.

As a Browns fan, I feel for Giants fans who thought things would get better with Pat Shurmur as the head coach. This match-up of 0-2 teams should be a bit more even on paper. The Texans are given a few points for being at home and because of Deshaun Watson. I still don’t trust Bill O’Brien.

The Raiders don’t have a pass rush. If only they had an elite defender…

The Redskins are bad and no one is going to their games. A hobbled Aaron Rodgers will light up their defense and this one won’t be close at all.

The Bills stink. But I will never take a favorite with this large of a spread.

So Blake Bortles beat Tom Brady last week. That happened. The Titans are still trying to get Marcus Mariota healthy. Even if he plays it won’t matter. This Jaguars team is a legitimate Super Bowl contender once again.

Patrick Mahomes. That is all.

I was told the Chargers were a Super Bowl contender. I just don’t see it. However, this one will be close. The Rams have looked unbeatable but they have also played the Raiders and the Cardinals. Even the Bills could likely make the Cardinals look bad.

The Cardinals are given six points in this one. That matches their point total through two games. Khalil Mack may eat Sam Bradford and this one will be a blowout.

These are two very average teams propped up by their reputations. In what is essentially a toss-up I’ll go with the home team.

Matt Patricia won’t take down the Evil Empire he left like Josh McDaniels once did. The pain for Lions fans will continue as the Patriots dismantle this team that has already allowed 78 points through two games.

FitzMagic continues as Steelers fans continue to see their team head toward the pit of misery.